Finally, after weeks and possibly months of chicken house and compound building everything was ready to welcome our feathered guests.

I happened upon a ornamental chicken breeder website within our locality and . . . well, we had to go and look. The original idea of yr usual rusty specimens evaporated on seeing the selection available. Of course they still 'do' eggs but unlike the bred-for-egg production variety, these are slow-motion eggers. And that's fine. The former produce many but over a shortish space of time, the latter, less, but produce for longer. And they are soooo funny and beautiful. We may still buy a small flock of rapid egg producers but for now we'll see how our four new lodgers do.

Freezing weather speeded up the choosing otherwise I think we would have been there for hours cooing over the various 'models'. So, we opted for a mad looking Russian breed with black feathered hairdo, two 'peking' fat brown and white speckled ladies who walk as if they have shoplifted masses of items within their amble father gowns, and a funny little beige and white female with two feather earrings who I think may be actually a small dog. 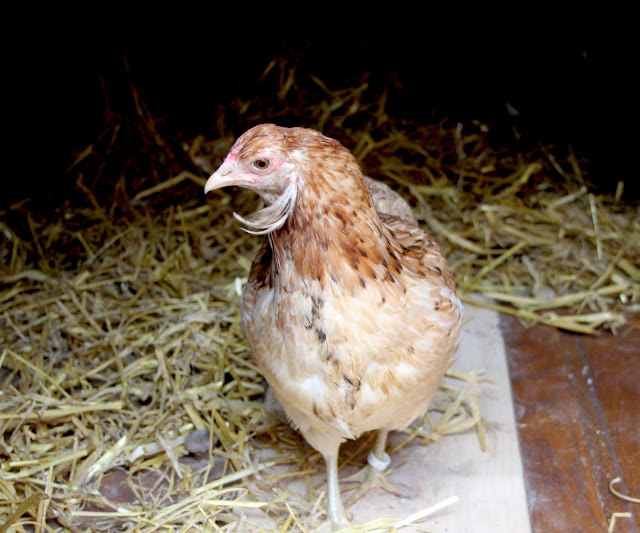 They were introduced to their new home yesterday and have spent much time scratching away in the undergrowth of their pen, and sleeping in the straw of the timber framed chicken mansion. We might just have to go and get a few more, budget allowing...

And, they have names . . . Above, the Eerie One. Below, Mussorgsky. Below, below, Tweedledee and Tweedledum. 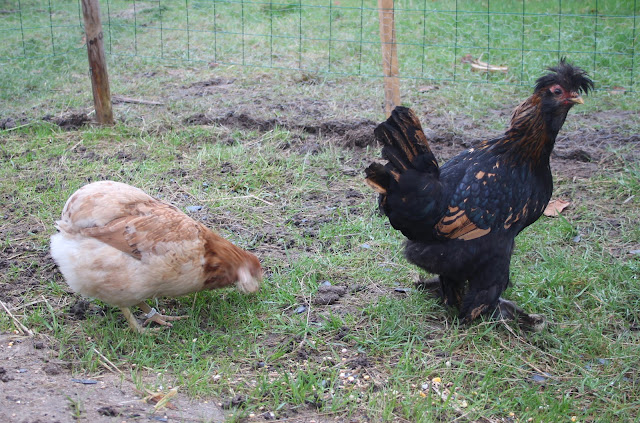 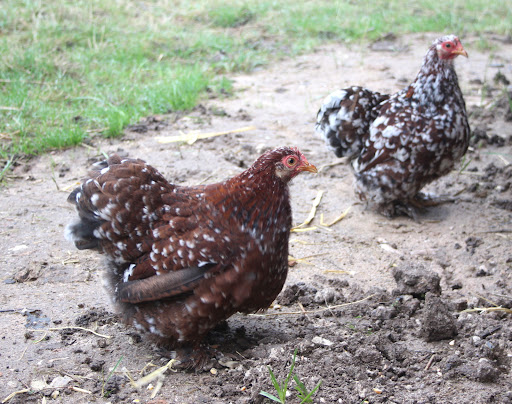 Posted by writing and other stuff at 10:17 No comments:

It started out as a simple 'let's make a chicken shack' idea but morphed into a miniature timber and mud house with slate roof. We completed the compound yesterday, just a few boxes and straw to add, and the ladies themselves. The last ones we had in the south were all called Gladys; this may continue with our new flock, or not. Possibly an equivalent French female name - a voir/to be seen.

The purchase of yr normal rusty-red birds was prevued but now due to the time and investment taken we may well add a few more unusual birds. I've found a bio-chicken breeder half an hour away with some fabulous examples on their site. 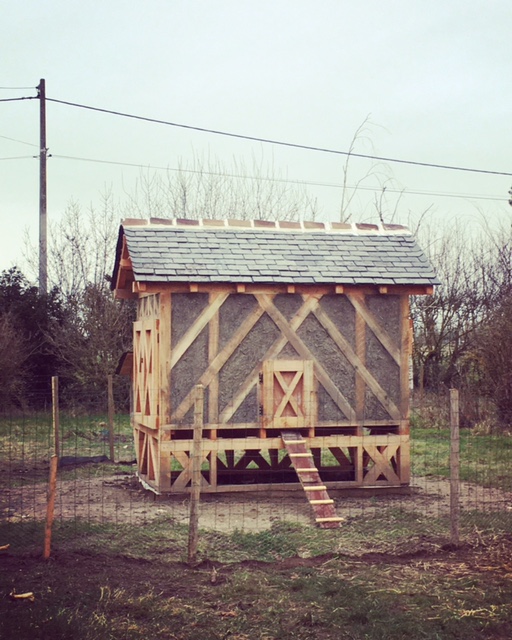 Posted by writing and other stuff at 23:00 No comments:

None. Can't be bothered as I never keep them for more than about four hours.

I like swearing, so I'll keep on doing so, in moderation, for moments which require it. Not much to give up as we eat pretty frugally already - all previous meals surpassed however by this new year day's lunch - an ex milk carton of frozen soup; not sure what it was, possibly split pea and vegetable matter, actually rather good. And a recycling point for milk carton re-purposing rather than buying plastic food containers? 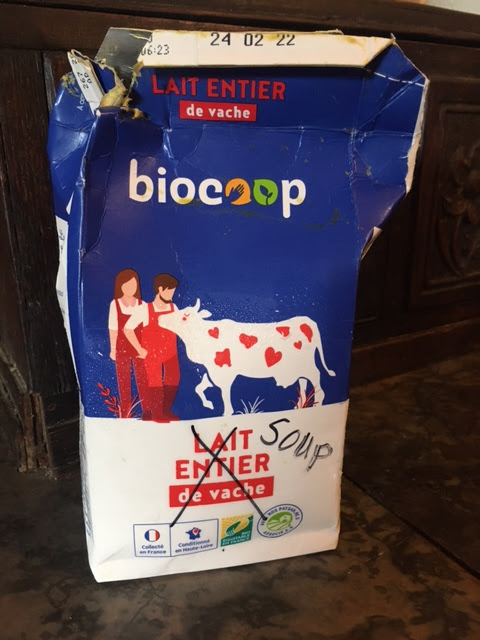 Speaking of which, it seems Macron, our leader, has decreed that there will be no cucumbers wrapped in plastic from the first of January. Some other veg and fruit too. A long way to go still but it's a start. I might invite him for lunch and point out the fields near us which are covered in meters of one time usage plastic, a new and ugly thing which must be hugely more devastating for the climate as I suspect it is burnt after being rolled up and discarded at the edge of the fields...

We watched Don't Look Up last night from the comfort of our home cinema/TV in bedroom and were utterly impressed in all ways. As a way to highlight climatic distastes and not have thousands of people yawning and reaching for their remotes, it totally 'does the job.' A finger-wagging documentary or doomsday blockbuster without an ounce of humour just wouldn't have the same impact.
I was amazed to see that the Guardian has two reviews of two stars as if either they have been warned off from applauding this simple but incredibly effective message or genuinely just didn't 'get it'. One of the reviewers mentioned slapstick comedy; I'd say the humour was relatively quirky and well-crafted with some nice moments of absurdity and satire on our ridiculous and careless trashing of our shared and only home.
The casting is genius with DiCaprio in full-on incredulity at the way his and Lawrence's imminent disaster findings are upstaged by the usual media diet of celebrity tattle. I especially loved the plastic-toothed Tech Billionaire played by Mark Rylance with his febrile stuttering delivery punctuated by occasional bursts of uncontrolled giggly laughter.
The ending couldn't be better - just enough sentimentality and love, but hilarious too as a certain quota of the human population attempt an escape. I won't say more in case, dear human planet-sharer, you haven't seen it.
One line spoken by DiCaprio will certainly stay with me as I observe our changing landscapes, dwindling rivers and heightening temperatures; and as I shake my head in incomprehension at the next useless techno gadget to be pushed on all advertising platforms.
'We really did have it all, didn't we.'
Posted by writing and other stuff at 22:01 1 comment:

As a great Hitchhikers Guide to the Galaxy fan I recalled, while polishing our various pairs of shoes this morning, the section about the Shoe Event Horizon - an economic theory revolving around failing society and retail therapy in the form of shoe buying which eventually leads to more and more shoe shops until the only viable shop to start up is a shoe shop. Society eventually collapses and the world in question spirals into ruin. In the case of Frogstar B the population forsake shoes and involve into birds.

It does often seem to me that we are in danger of this becoming reality. Not perhaps from just shoe buying and it would be unlikely we would evolve into birds, at least not in the relatively short term, but the vast tsunami of consumerism that is upon us appears to be ever increasing despite dire warnings from all directions: pollution, wastage of raw materials, sweat shop labour and the mental hollowness of shopping for the sake of it. 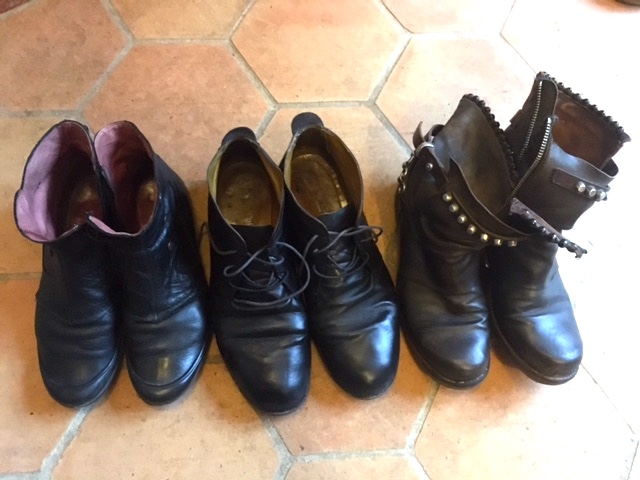 I'm a rubbish consumer, especially of shoes, and so is Ezra. Mark, having off-the-chart sized feet has little choice other than to accept whatever can be found online, or move to Scandinavia where such large feet are more known. Ezra and I, having average shoe size have benefited from some remarkable footwear castoffs over the years. To the left above, my most comfortable boots ever: soft Italian leather footwear from a boot (ha ha) sale for two euros which have been keeping my feet happy for about five years now.

The middle pair are Ezra's from 'Le Bon Coin' an ultra useful site I've blogged about many times before. These are hand made leather shoes from a shoe maker which were obviously never worn; basic, well made, and very comfortable, for ten euros. The boots at the other end were NEW! in a sale in a scarily expensive shoe shop in Perpignan. I just loved them and knew they would be worn for years, which they have been, constantly. But they are totally repairable, the heels done twice and the soles to be done at some point.

A small boot-related extract from my latest work in progress: Outcrier.

A slap of wind shaketh the building. Rain smatters against the eyes of the house. Hamish Harris adds wood to the fyre and procures a flame to allume the huddle of candles that crouch on the mantle-piece. “You’re not going to attempt a walk back, are you?”

I note my old boots stayned wi mud, the steem rising from them. “Praps it would be not so eezy.”

Posted by writing and other stuff at 04:08 No comments:

Wishing all who trip across this blog, and the more constant readers from over the years, a very happy and peaceful Christmas and best wishes for the next year... 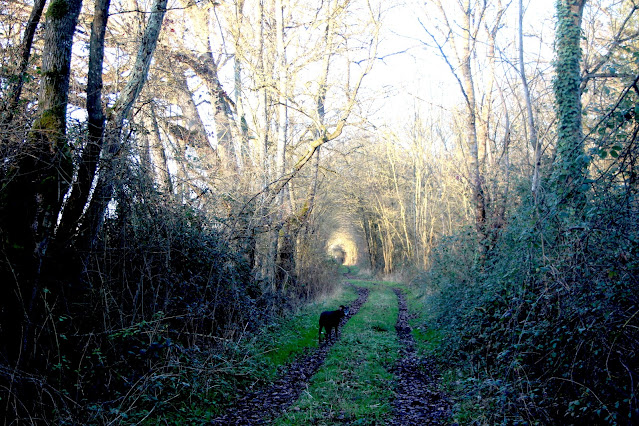 Posted by writing and other stuff at 08:43 No comments:

Forty-eight hours or so. 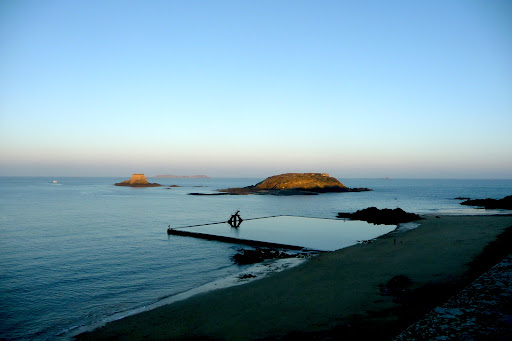 Seawater pool of Cancal in the early morning

Leaving 'the lad' in charge for a couple of days, Mark and I went off for this thing called a ho-li-day. It seems to be a very long time since we did this and how wonderful it was to have a bit of time away from the usual routines - not that I'm really complaining - but to see unfamiliar landscape, different architecture, eat food we hadn't concocted ourselves and talk about things other than household issues, the ongoing building projects, and gently curse each other for failing to put bin out/bring washing in/letting the fire go out, etc, etc, was indeed . . . brilliant! 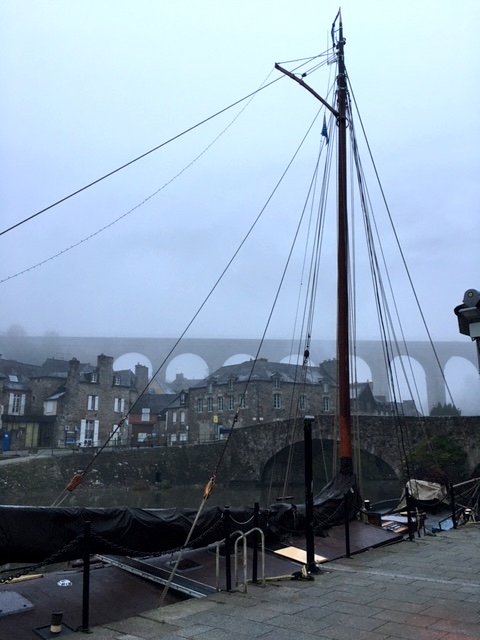 The port and river Rance at Dinan

I always feel that so much is absorbed on short breaks away; certainly the sites and sounds of our chosen town, Dinan, will be printed on my mind: the very early morning walks through silent cobbled streets, church bells, seagulls, the misty decent down a steep cobbled hill to the river and port. We also got to see the ocean on a sharply cold and clear morning before the Christmas crowds arrived in St Malo. 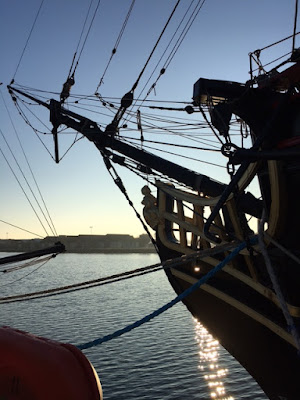 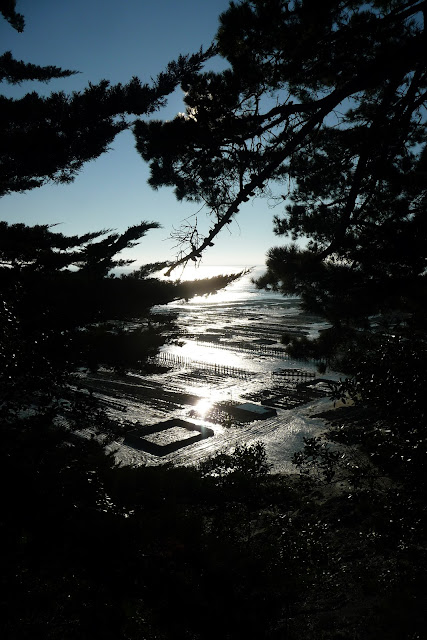 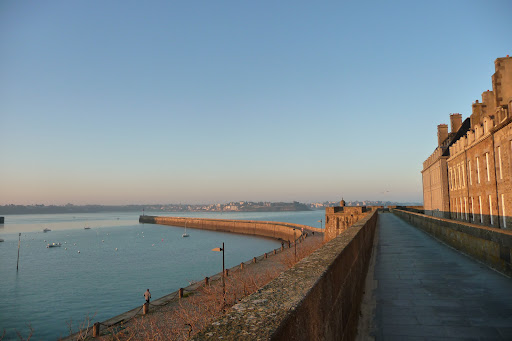 Crepes were eaten, cider not drunk (distant memories of 18th birthday and imbibing far too much of the stuff), a few Christmas presents purchased, ancient buildings admired, and all hours used to the maximum. 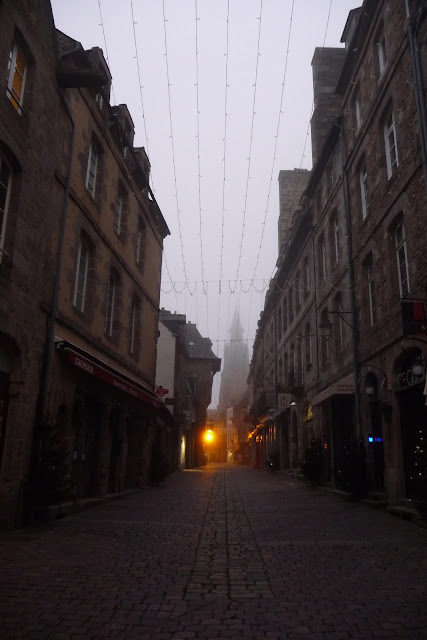 Dinan historic centre at 7:30 am 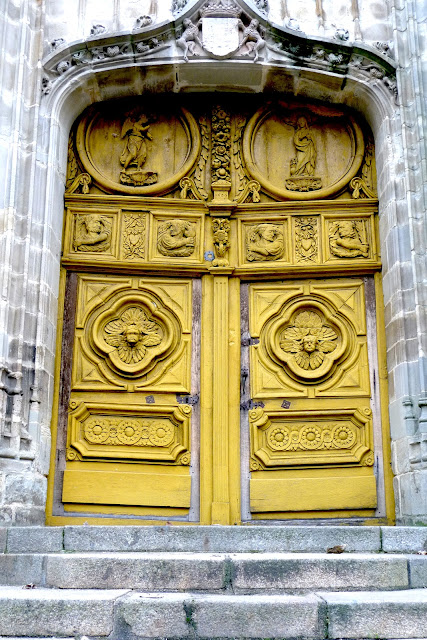 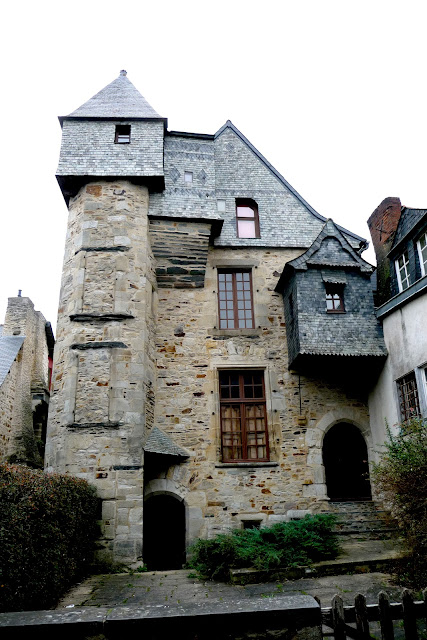 World's most beautiful yellow door, and mesmerisingly bizarre building - in Vitré
Posted by writing and other stuff at 11:22 No comments: