Difficult to imagine now but it was exactly a year ago we were slowly packing up our son's home-life to transfer it a few hours Westwards to Bordeaux - guitars, paints, clothes, flat-pack bed, pots, pans, etc.
This year it's a lot easier - a lot less kitchen equipment and a few more guitars.
I'm aware of a slight hovering melancholia but NOTHING like last time when it had felt as if we were winding up our parent lives too. A bit, 'err, what now . . .' Tons of stuff of course, work, writing projects, music, but a palpable sense of 'well, we've done our bit in this human existence-thing' was certainly present as we loaded the car, and hugely present as I had returned with the car, empty.
It's been a long and happy summer with the lad having slotted comfortably back into the family life almost as if he had never gone away. But now it's time for him to reconnect with friends and re-learn the arts of hand-washing socks, stretching food-budgets and living in a tiny space - as it should be.
He'll return however every few weeks or so with a foetid bag of linen and graze solidly stocking up on nourishment, and we shall look forward to that.
I was talking to a newish friend recently about the parent/offspring uni/work separation thing and how traumatic we had found it. She had leaned back against her kitchen dresser and rolled her eyes.
"Christ, I couldn't wait for them to go! - both of them."
"Really," I had said, slightly amazed at the fervour in her voice.
"Y-es! Got my life back!"
I suppose in some ways that might be true - a few less meals to provide, less washing, less nagging about stuff, although these days he's realised that being adult does mean a certain responsibility and sharing of jobs - the emptying of the compost bin, no longer an annoying thing to try and get out of, washing up is just part of life, etc.
What else. Err, stuff does stay cleaner. And . . . Nothing really. He's great to have around. We laugh, walk dogs, cook and discuss life, politics and reenact bits of Tim Vine/Spaced/Black Books.
Yes. I will miss him again but not quite to that same visceral degree. 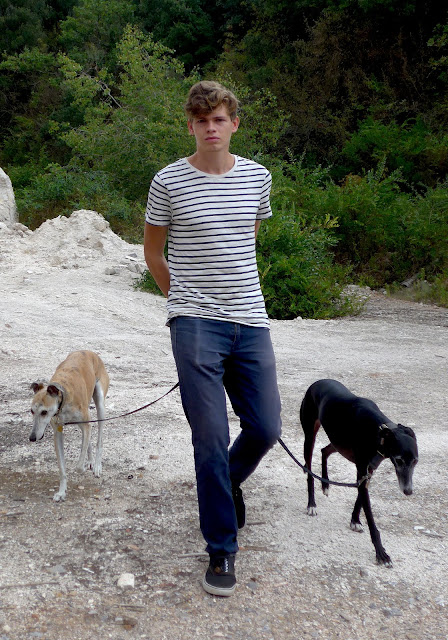 Happy new term-time, lad of ours.
Posted by writing and other stuff at 04:31 No comments:

A genuinely brilliant bit of acting

So much sex/romance in films is so robotic and un-erotic. I was quite transfixed by this performance - feel the chemistry!

Couldn't find a good clip in English but, hey! equally arresting . . .
Posted by writing and other stuff at 02:19 No comments:

Very much restricted wanderings this time as I only had part of a day to explore my home town.

I arrived at my Air B and B at midnight - five hours after I said I would, due to a four-hour delayed flight and another hour standing around at Stansted airport with about two hundred other people all also wondering where their baggage had got to.
Luckily, the very lovely host was totally understanding, made me tea, asked what I was doing in London and showed me - after making me a hot-water bottle - to my lodgings - a beautiful garden shed. Actually, not a shed - more a recycled wood cabin with found 30s windows and tea-chest interior cladding. 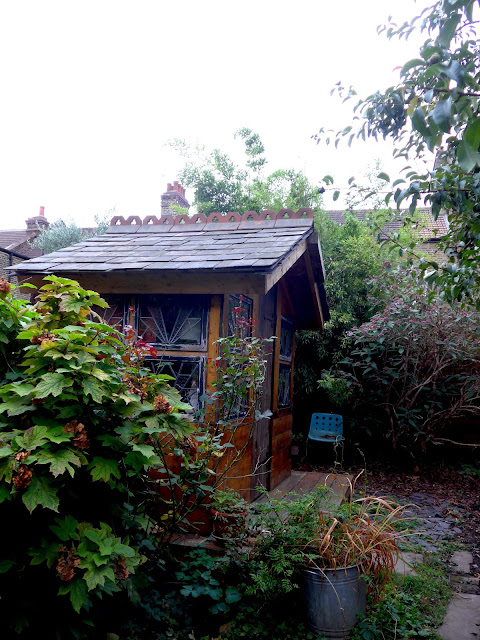 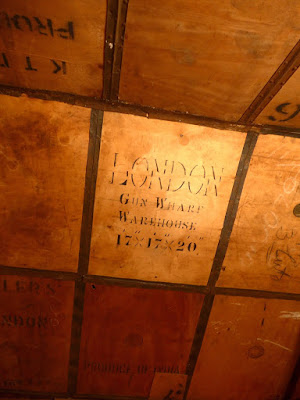 I don't think I have slept better for months.
I lay there thinking how odd it was to be in a small wooden house in a Clapton garden within this vast throbbing city, and how really quiet it was and then I was out for eight hours - unheard of!

After my agent meeting the following day, I returned to the shed, had a rest, read one of Mark Haddon's short stories (excellent) and then walked a very, very long way and got lost (no GPS, thank you!) but it was an interesting getting lost, mainly around the Hackney Marshes area and ending up at a pub called The Approach near Victoria Park where a lot of my novel is set.
I met up with friend, Sophie, and we discussed life generally before yawning into our drinks and deciding that our respective sleeping places were calling. 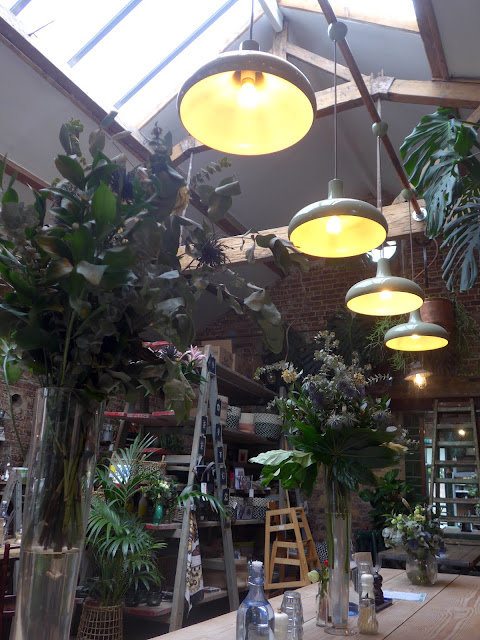 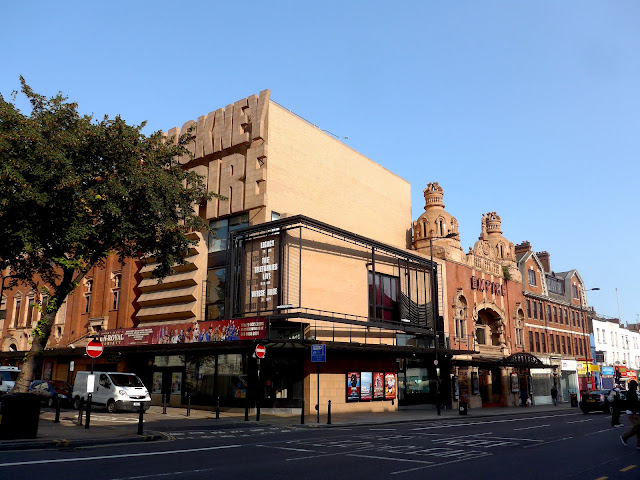 The Hackney Empire. Somehow, I've never seen this/these buildings before! One of a few architectural symbiosis of old and new that, to my mind, works. 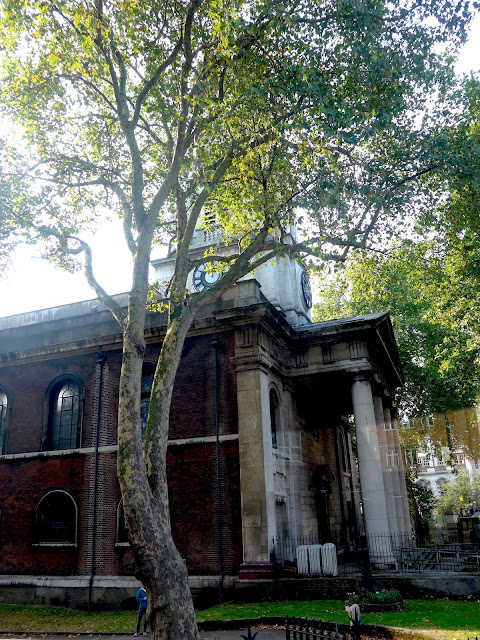 The Mighty St Leonard's Church, (from a bus) home of my Character, Hoxton. 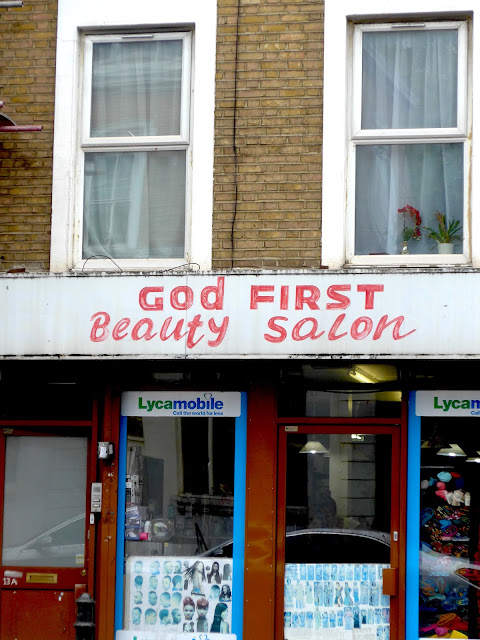 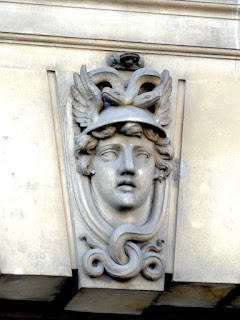 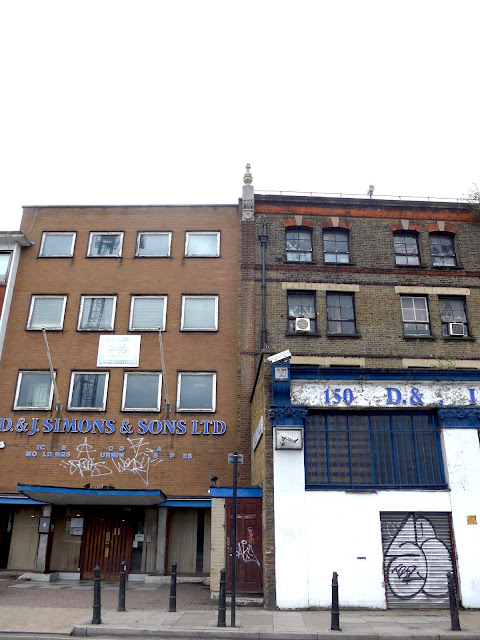 I'm not sure why I photographed these two edifices but I just liked their air of silent resignation to the next bit of decay and graffiti; respectively sitting under about 150/60 years of drizzle watching human-progress - or not. 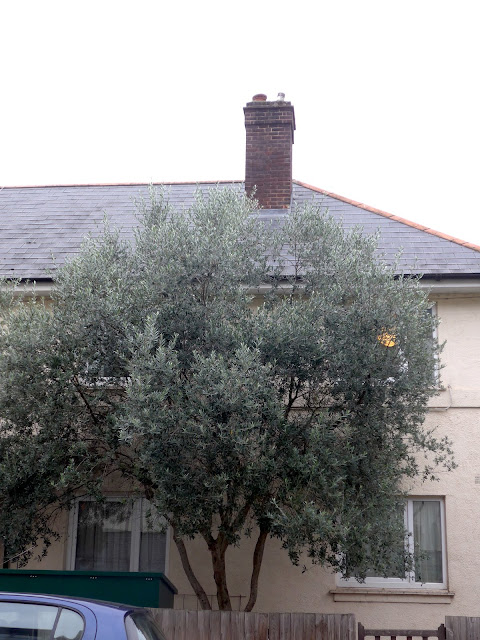 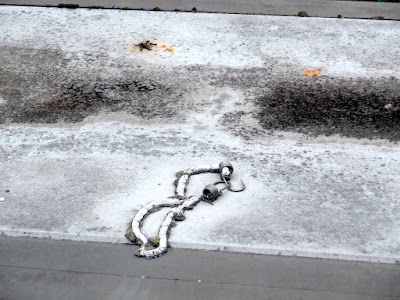 Top of bus-shelter debris. I saw quite a few surprising things on the bus from Hackney to Covent Garden - a credit card, shoes, a sandwich, books, glasses . . . Thrown up there from the street, or from the bus, passing biplane . . .
This bungee-rope must have been there for a decade or so judging by the moss that surrounded it. I once started a short-story about a man who lived on a bus-shelter roof. I might continue it. 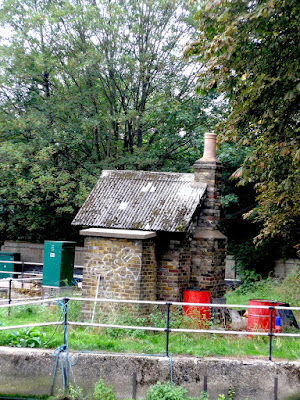 A tiny building which must be mostly a fireplace 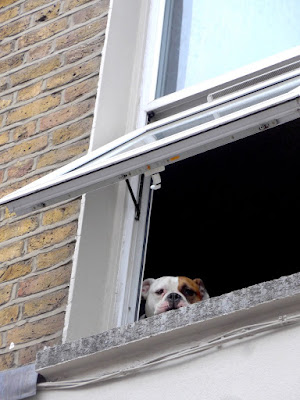 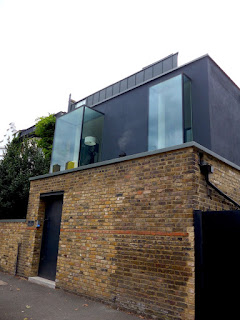 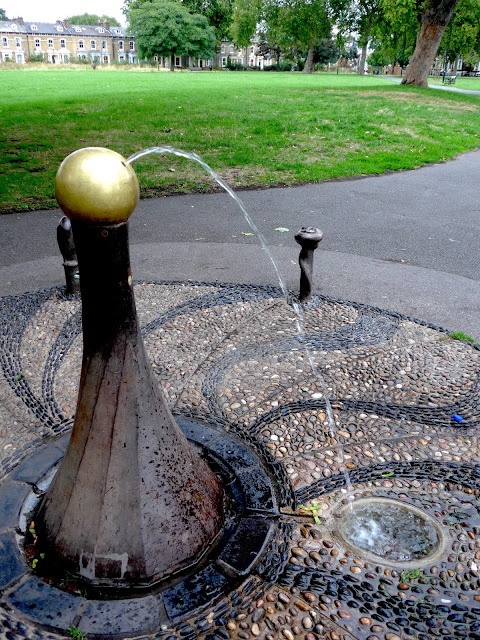 A magnificent drinking fountain in Victoria Park - I loved the way the trickle has been designed to enter the little oval pool with a groove so the water returns to the base. And the pebbles! Wow. 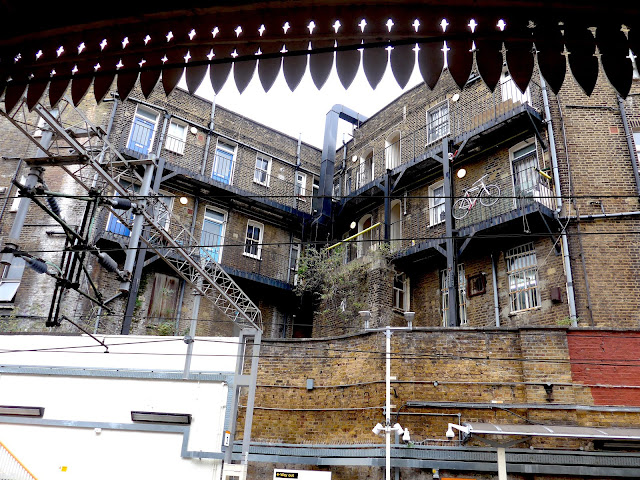 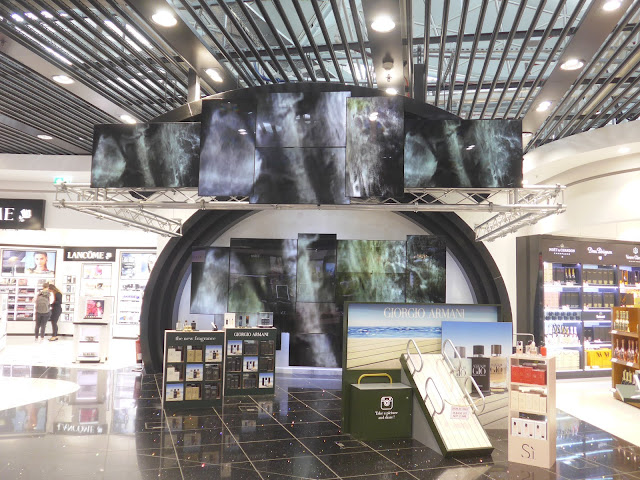 And back to the airport. I'm sure the duty free bit has expanded again to feature further meters of people thrusting bits of perfume-saturated white card at you; and even more chocolate/tea/booze and useless plastic crap than you can shake an advertising exec at.

There's always a spotlight area for a certain product halfway through the D-Free bit - last time I think it was Toblerone, and before that M and Ms? The current Giorgio Armani installation was rendered somewhat ludicrous by the 'no climbing' sign on the pretend boat-gangway.

I bought a small tin of Earl Grey as a congrats present for my son passing his driving test, avoided everything else, ate a very nice black-bean thing in Leon and settled down with a pot of tea to write my meeting notes out - just another member of the huge human colony perched on seats and taking Instagram pictures of their meals. We are a strange lot.

Posted by writing and other stuff at 05:18 No comments: