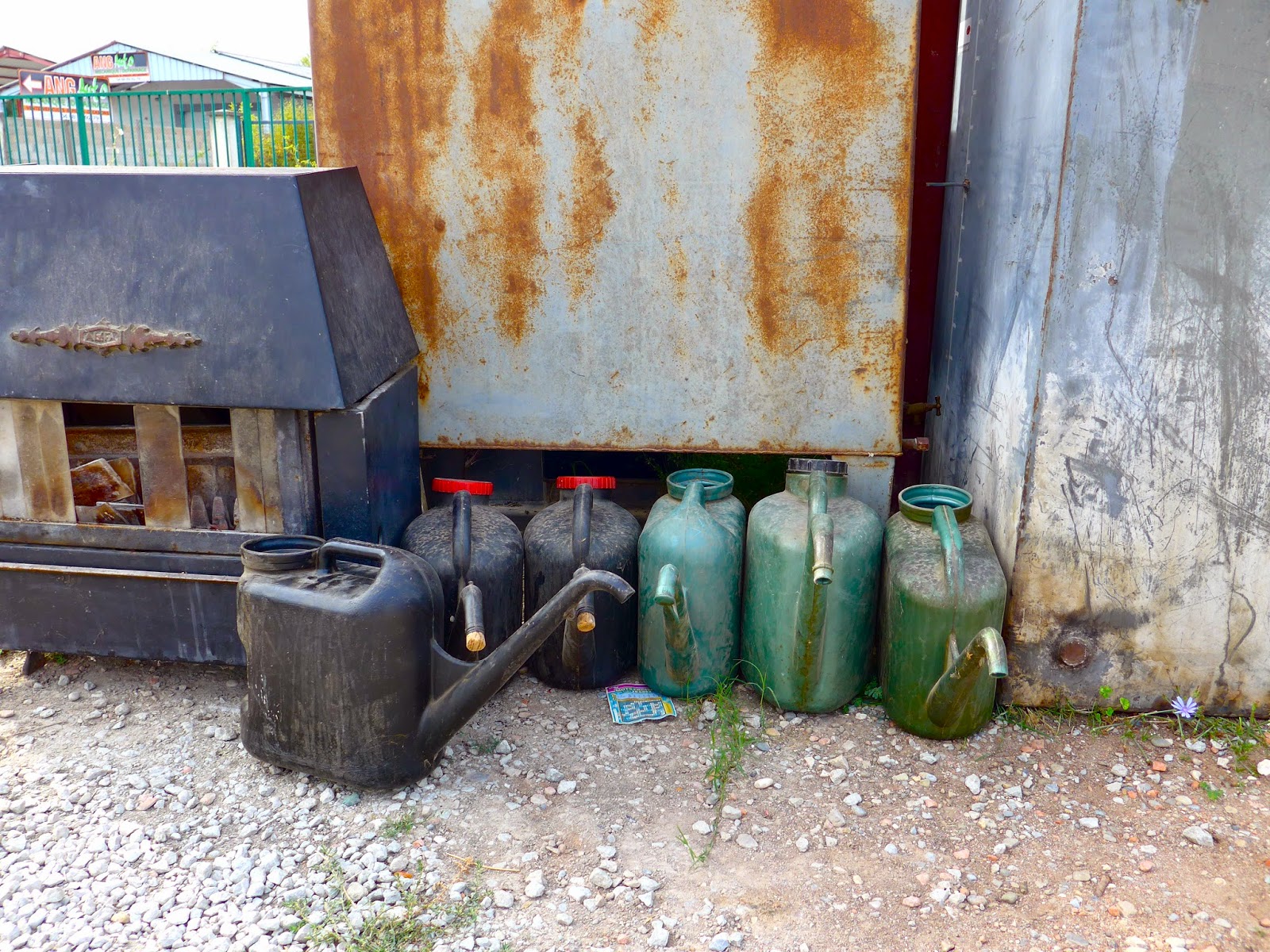 Posted by writing and other stuff at 10:14 No comments:

Or buildings - okay, I'll choose beach hut number 261 in this case as I like it's colour combination of azure paint and dark varnish. 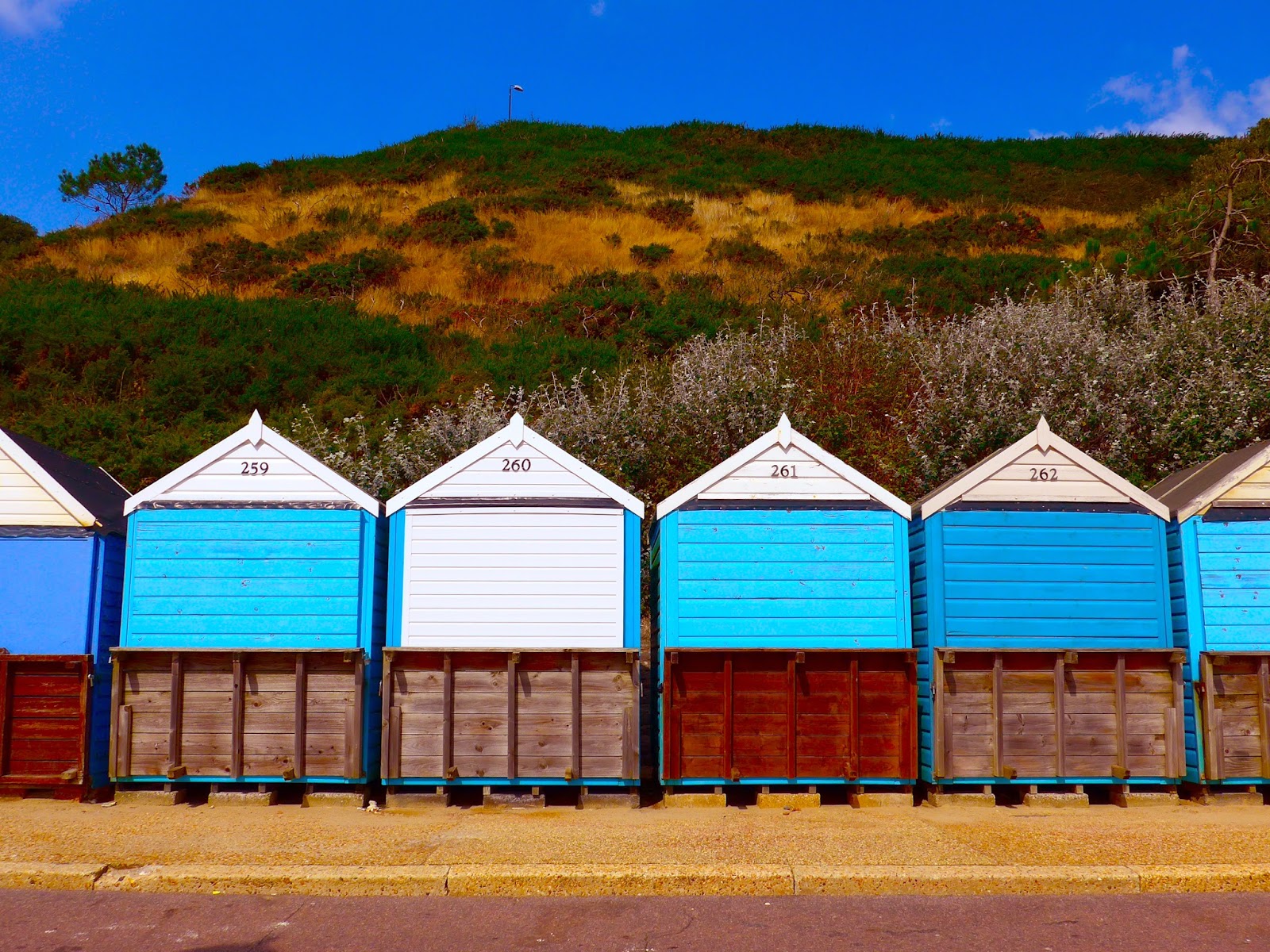 The Beach Hut is the ultimate summing up of the word snuggly for me. Perhaps not if it was a hut on a californian beach, but anything along the British coastline summons forth images of grey, lashing sea, wind, kettles on one ring gas cookers and battenburg cake. Of course there are the languid days of beach towels drying in warm breezes and sun-loungers, but it's the grey days of retreat from the elements that I recall. Many times down on the Dorset coast while walking along one of the promenades in late summer I've observed the great British art of 'making the best of' - beach hut owners with Sunday papers, tea and digestive biscuits, sitting huddled, with the next kettle of water heating up.
Occasionally, huts come up for sale along this stretch of coast and I have allowed a dream to wander for a few moments around my head before reading the price tag.
Here's a good one: located at Hengistbury Head, a windswept portion of the Dorset sea front - a mere 126.000 pounds. 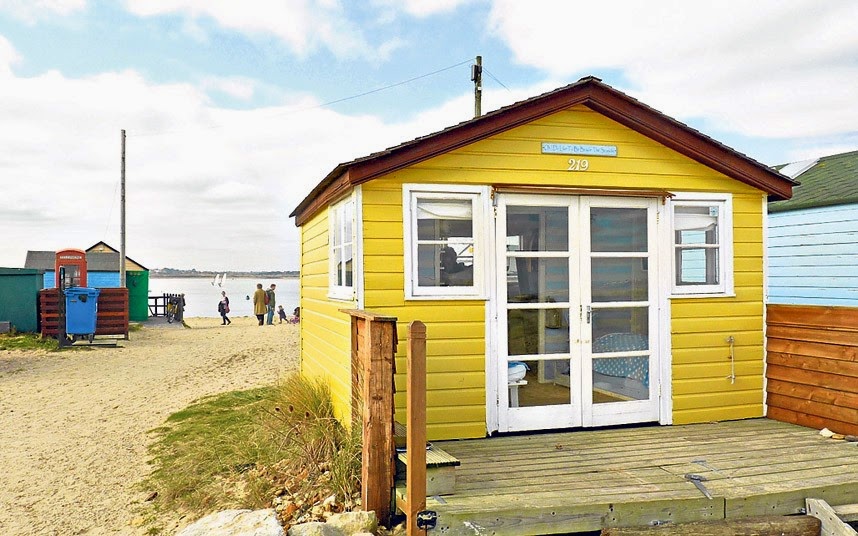 Posted by writing and other stuff at 00:41 No comments:

Things I know nothing of

Yes there are a lot. Many thousands and millions, in fact, if I were to be shown a pie chart of All Things, the tranche that I would know about would be so infinitesimally small that I would probably feel hopelessly depressed.
However, I am supremely good at wondering about Things; how they come about, how anyone could of even have thought up of the mechanics of say a Bulldozer, let alone set in place the manufacture of one; how people invented televisions, hair dryers, food processors, the fridge, maths, hydraulics, cars, molecular gastronomy - and in some cases - why? How does electricity really reach all the little plastic squares in my house? I have a vague idea, as vague as where I think my liver might be ( really must look at a book on anatomy).
Yesterday, I went down to the supermarket and was amazed to see, apart from the fact the car park was full of rubble (and Bulldozers) that there was a sort of metal stand from which thirty-foot high flames were leaping. I was actually more amazed to see that no one else appeared to be amazed, car boots were being filled, trolleys wheeled and all usual supermarket client behaviour.

I parked and went over to gawp and realised that the whole petrol station was in fact being moved. How do you move a patrol station? Incredible. The danger element (hence the metal flame-thrower as a petrol safety valve?) alone, the logistics, and again, why? What was wrong with it as it was? The powers at Leclerc, having been faced with the fact that Super U had gone through a minor re-looking, have obviously decided to retaliate with a massive overhaul and expansion program, thus a need to move the petrol pump area.
I climbed onto a boulder and studied the scene of the semi-unearthed petrol holding tanks. It reminded me somewhat of the scene in Quatermass and the Pit when they discover an alien spaceship while digging a new tubeline. I'd often wondered, while filling the car, about how big the tanks must be, and there they were, revealed, my questioning answered. 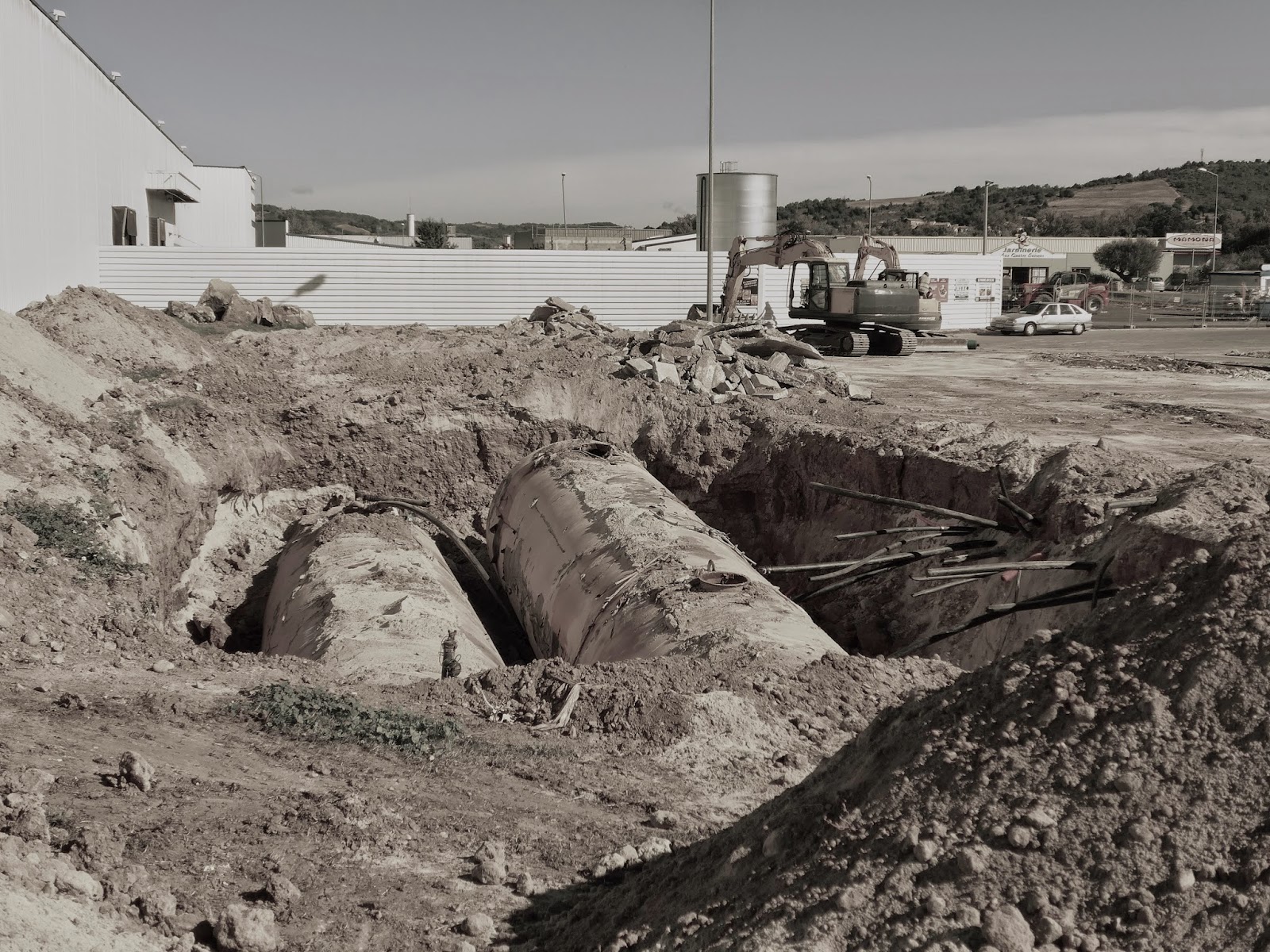 I was obviously getting too close to these fascinating operations as someone in a yellow hard-hat was approaching so I took a couple of hasty pictures and entered the shop to buy A4 paper (imagine the machinery required to cut, bleach, re-cut, pack and deliver it) and cat food - not something I wonder about too much if I can help it.
Posted by writing and other stuff at 06:51 No comments:

Email ThisBlogThis!Share to TwitterShare to FacebookShare to Pinterest
Labels: bulldozers, how?, Quatermass and the pit, supermarkets, why? electricity

to a well-organised (but not overly obsessive) wood pile. What could be more beautiful? To those who heat their house in this fashion would undoubtably agree; there's nothing quite like standing back and admiring the stacks of oak, rescued chunks of builder's planks, and branches cut from the previous years fruit tree pruning.
Now I just have to get the chimney swept. Sweeps are sought after here in September and October. Organised folk might have got the job done in the spring, but somehow the whole winter experience becomes lost with the first warmish evening and we move on to all the next season's jobs; the fire left full of last ashes and the chimney forgotten.
The first sweep I called had done the Aude region and was now moving onto the Ariege. The second arrived yesterday, took one glance and said: 'Non madame, c'est pas possible' - he had back ache and our particular type of 'insert' fire is complicated and heavy to deal with.
So back to the Pages Jaune . . . Success: Mr Bladel is coming on Saturday and has assured me that his health is fine and that any type of fire is no problem.
As the weather seems stuck firmly in late summer at the moment, fires, blanket and hot water bottles all seem mysterious things, but will no doubt all be soon revisited. 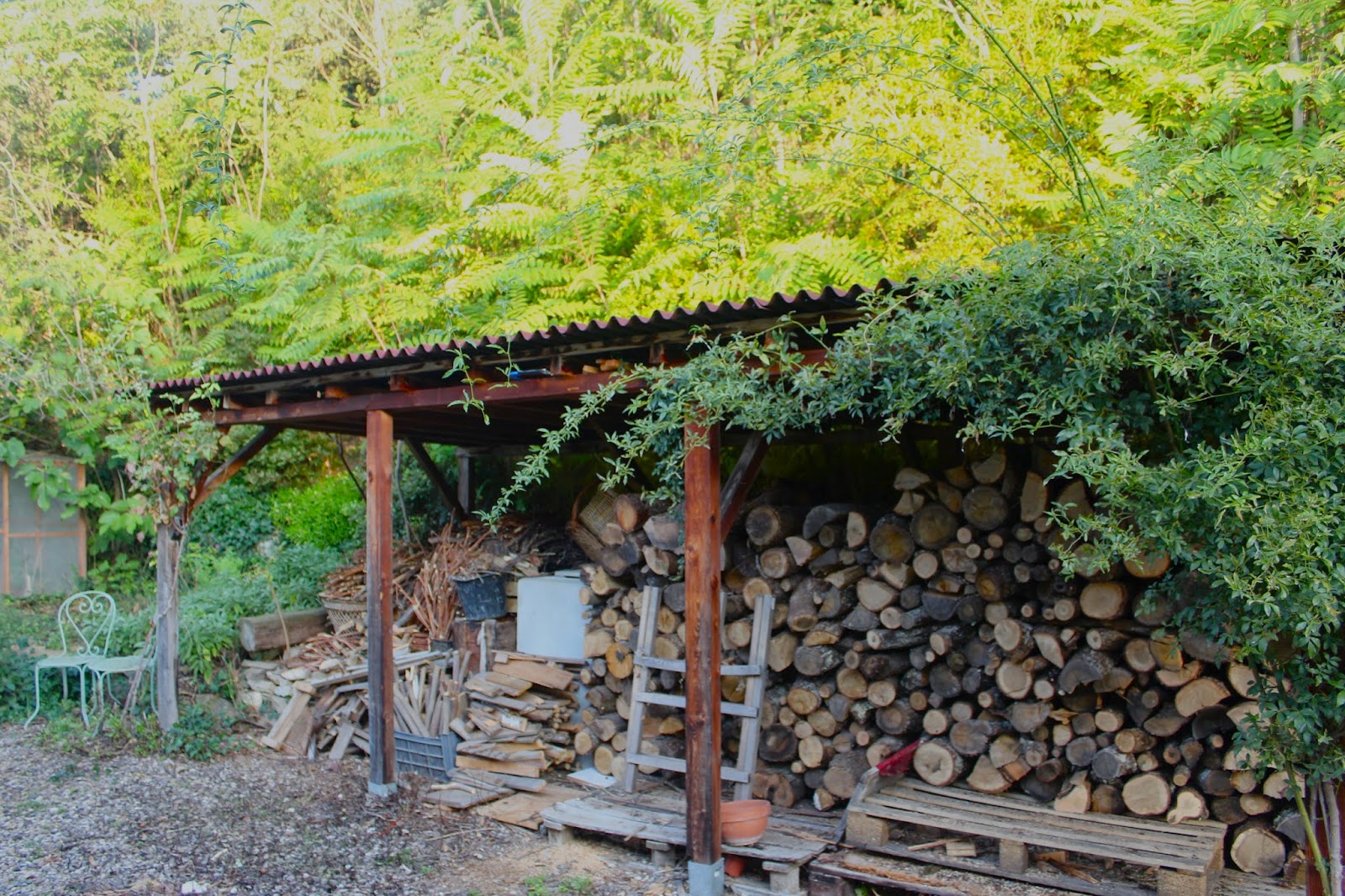 Posted by writing and other stuff at 00:07 No comments:

Our ancient, rustic table has now sat on this terrace for seven years - I think. Bought from Harry the Dutch antiques dealer it supported many an evening meal, breakfast, bread-making session and millions of cups of tea in our previous house too.
Now exposed somewhat to the elements it has warped a little, and has become food and housing for many beasts.
At various times of the year - spring and autumn mostly - the holes at both ends are taken up as leaf-cutter bee logements.
Whoever sits at the end nearest the front door at lunchtime has to move a little to allow the bees passage; in Ezra's case a sort of jiggling dance, combined with - Ahrgg! Get away! and I have to remind him that that it's only a bee passing, not a wasp or hornet.
After a few days of 'leaf-hunting' the bee squishes the last leaf into the hole and blocks it with wax? Pollen? Presumably the baby bees venture forth at some point, but I've never seen their inaugural flight.
What fascinates me the most about this twice-yearly event, is how they know about the holes. Is it bee information passed down? The same bee a couple of years running, then informing its offspring?
We also have mud-collecting bees that nest in the end of some wind-chimes, amongst other odd places. A few days ago I went to inflate my bike's tyres, and after realising nothing was happening I checked the nozzle to discover a mud-collecting bee's nest in the end of it. Flat tyres for a while then . . . 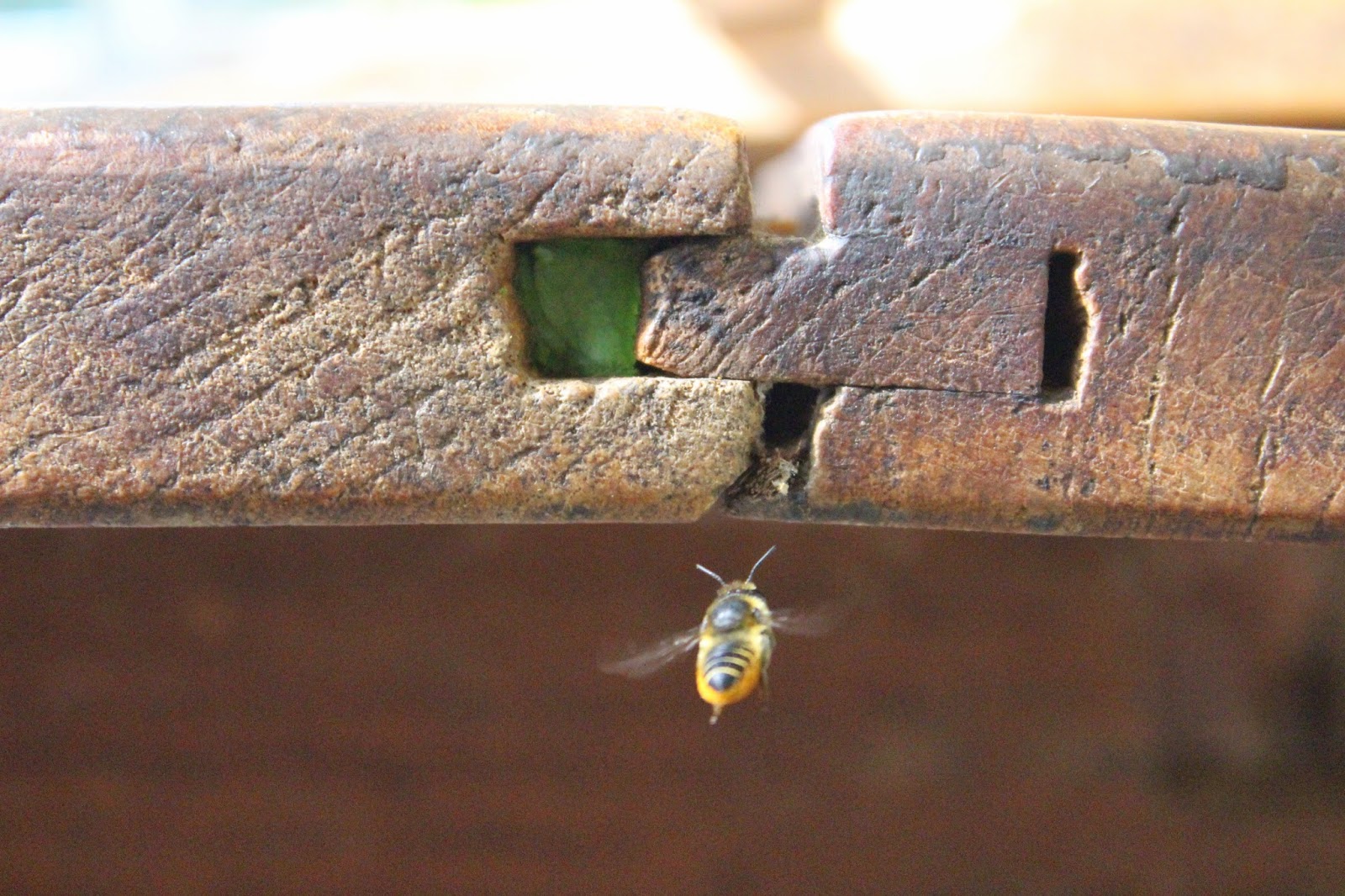 I often spot them, amongst cloud-chickens, cloud-dragons, birds, angry people: cloud-just-about- everything. In fact I could spend quite a large percentage of my time lying on benches looking up at their ever-changing formations. Why not? It costs nowt and is calming to the mind.

Here is a long-necked poodle I noticed on a balmy evening recently. Posted by writing and other stuff at 07:27 No comments: