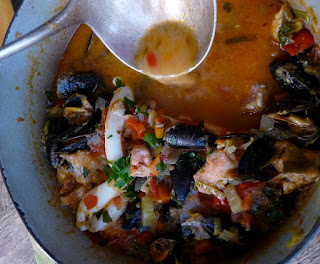 Over the balmy months we seem to had forgotten soup, apart from an occasional dabble with a few cold variants.
I decided to 'have a go' at some Bouillabaisse as we had invited fish-loving types over.
Walking into the local fishmonger I casually mentioned I would like some ingredients to make the aforementioned dish. The shop owner and assorted elderly fish-buying members of the public started back as if I had asked for items for DIY bomb equipment.
This was serious, several days careful thought should have been given . . . not to mention days to 'commande' the stuff. 'Madame, you are clearly insane, English and no nothing more of the cuisine of fish than opening a packet of 'doigts de poisson', he said fixing me with a cold fish eye. Not really, but he obviously thought that.
When it became clear I was not going to go away, he suggested some other fish that could possibly be used in an approximation of the hallowed dish of the south coast: moules, red mullet, wolves (loup) salmon, mackerel and white boingy stuff (squid bodies) etc. Agreed, fell over with shock of price, paid and went home to recover with tea and reassuring book of basic greek cookery.
Actually, I found an excellent idea for a fish soup with loads of veg which the Greeks used to make and take for lunch in big cook pots on their boats.
Along these lines . . .

Also I made a sort of 'aoli' (classic Marseille garlic sauce) but realised at the last moment we didn't have bread for bread crumbs, so used an old croissant.

Egg yolk, ton of garlic, hot chili pepper, rock salt, croissant. Not to be eaten if you are newly dating someone.

More soup later.
Posted by writing and other stuff at 02:16