Our wood delivery came yesterday.
Due to me be being . . . stupid, when Mr Belamie had phoned re the delivery, I ordered twice as much. Their truck appeared at 9.00 am loaded with a vast quantity of wood. When it became clear that I had made a mistake they were obviously not going to want to take it all back. I could have broken down and wept, pleaded . . . stupidity, or just bravely said, 'hey, we'll be well ready for winter this year then,' which is what I did.
It took all day to arrange the wood pile, including earthing out the very deepest recesses of old rotten stuff that had been home to many munching things. I am proud of it now: we even have graduated sections of kindling from dried lavender to small fig branches. 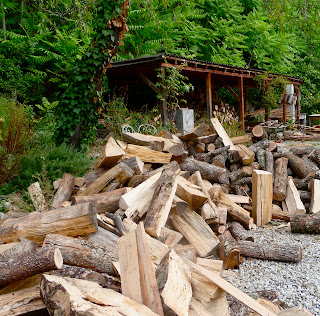 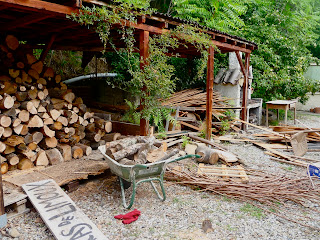 Mr B told me that snow has already arrived at high-ish altitude in the Ariege. He has never heard of this in September, so I'm glad the wood is sorted - hope it's not going to be quite as cold as last year in February . . .
Posted by writing and other stuff at 11:58