Odd how some things just come about: the way one walks, sense of humour, likes and dislikes, and writing style . . .
I can't actually remember deciding on a style as such. I do recall a brief flirtation with italic nibs at school and taking ages over forming a few words but then that changed over time and somehow I've ended up with a fairly illegible scrawl. Maybe it's just that we are lazier now with keyboards and texting; writing, something a little alien and tedious. However! all that has changed for me from working on a script style for the character, Smithi, in my book of the same name.

After escaping from The Domes of Manchestershire (year 2073), Smithi travels the length of Britain, scribbling furiously in notebooks until the pens he has with him cease to function. He (and I) start to use a dip pen and ink. What joy! Writing becomes slower, a little more formed and sometimes a little haphazard - which I like.
Is it odd to reinvent one's handwriting? I don't think so; maybe it is but maybe I don't care. However, I wish I had thought a little more about my spidery, terrible signature - bit late for that perhaps, unless I become incredible famous and decide to change my name to include the middle A as something more than a letter - Alfred, I feel might be interesting . . .
Of course with this new way of writing, one has to have the right equipment . . . cue a bit of internet junk browsing and obsessional ebay tracking for a few hours. The inkwell I decided I would buy zoomed up to over four hundred quid! well, it was Georgian and apparently, and understandably, a rarity, so back to some cheaper options.
Le Bon Coin, in France is a great site for occasionally happening upon things that no one else seems to be looking for, and ancient inkwells obviously were not 'things of the moment' so I managed to pick up someone's bizarre collection for little money, including this rather intriguing 1920s ceramic bird - the inkwell part hidden under the snail shell - and it came with an excellent scratchy pen. 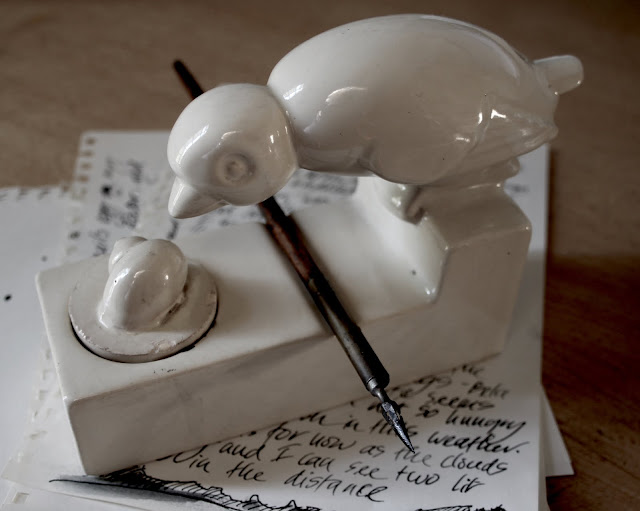 So onward with Smithi's next illustrations and letters. 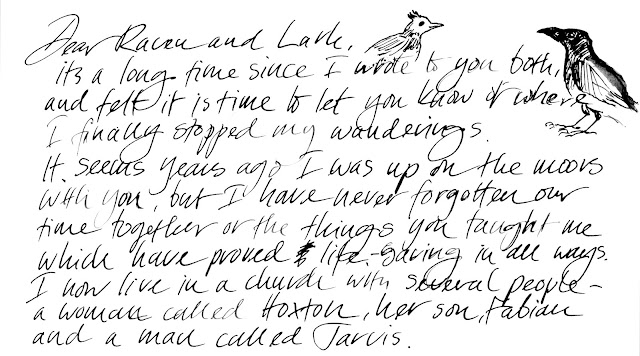 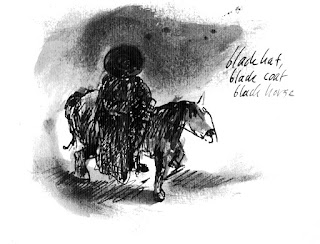 Posted by writing and other stuff at 03:26