8th of November and our local BIG supermarket already has all the festive calories well on display. I tried to find last years rant and can't but I'm sure it was nowhere near this early. 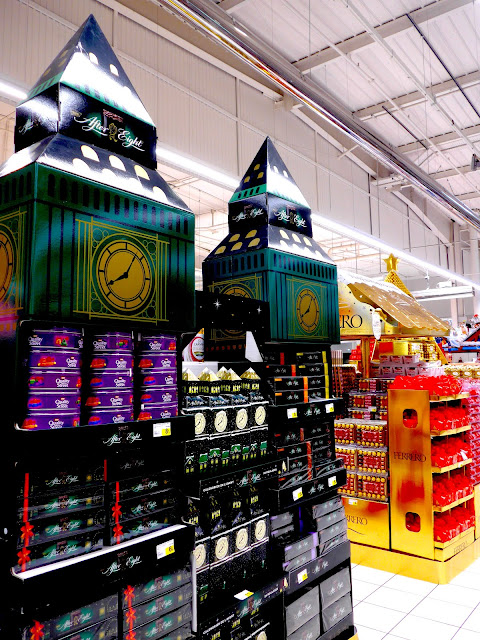 Cardboard Big Ben of After Eights - or, some creepy and messianic battleship Galactica?

So, After Eight Mints are dominating the territory this year in this particular shop - maybe some ironic statement on Brexit? I just looked up where After Eights (Nestlé) are actually made and was surprised to find they are still manufactured on British soil - Halifax and not within the scary-looking Swiss Nestlé plant somewhere on the edge of Lac Leman.
Hurrah for British products and come the great cutting of the umbilical cord from the EU mother ship (Hopefully Not!!!) at least that will be one export the rest of the world will be raving to buy. Except A 8 mints are obviously as British as Alpine horns, Muesli and Helvetica Font are. 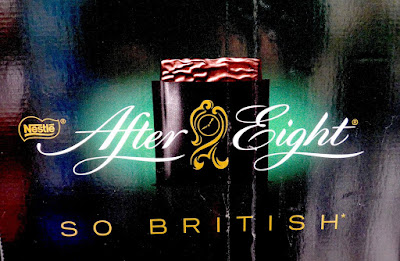 What I found so extra-weird was there were actually people fondling packs of NEW Christmas A 8 special editions: strawberry and mint, cat-liver and gravel flavour, etc, and then placing them in their trolleys. In early November.
Why not some heavy seasonal marketing on Butter Nut squash, VitC-providing citrus fruit, hearty soup ingredients? Well, obviously not quite the same money-raking-in as cruise-ship size display of chocolate from basically one manufacturer.
It's all so sad. Could be quite exciting in a twisted, consumerist way if none of this was allowed until say the 15th of December. Imagine the mayhem as shoppers climbed the wavering cardboard display stands, hurling tens of boxes of Nestle soft-centres into the hands of their waiting family members and/or already bulging trolleys.
Oo. I'm quite cross today. Think I'll head out into the rain for a dog walk then come back and eat some of Mark's home-made pumpkin pie.
Posted by writing and other stuff at 07:13