Sorry, another (minor) rant, but I am feeling somewhat jaded by a four hour unintentional wait in Alton and Woking due to disruptions on the Waterloo line.
Woking . . . never had the pleasure, or otherwise, to investigate the town centre so am doing so in a slightly dispirited way due to dragging suitcase around and feeling nasty from possible take-away tea poisoning. 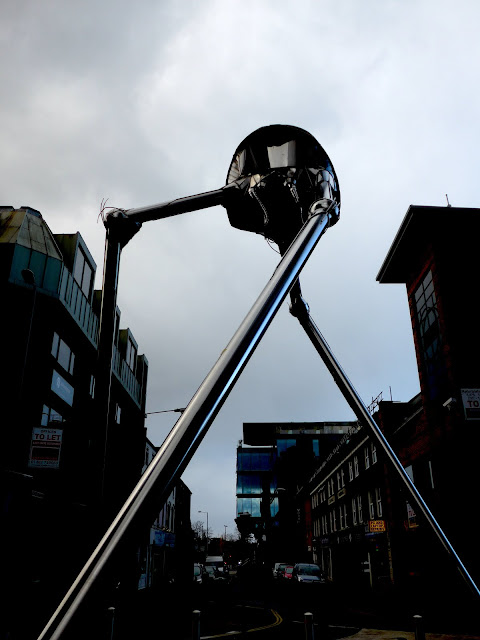 Lots of usual UK high street shops, many, many chain restaurants, small plastic potted christmas trees suspended from shop fronts, the biggest Superdrug I've ever seen containing vast swathes of sparkly landfill and, Poundland. I have just spent five minutes looking vaguely at phone charges as I failed to pack one for my travels but can't imagine that something electronic costing a pound would actually work so have bought one from a bored-looking youth sitting on a stool at one of those shopping-mall 'islands' of more stuff that's not actually in a shop - whatever they are called. An open-air shop? except it's in shopping mall air. 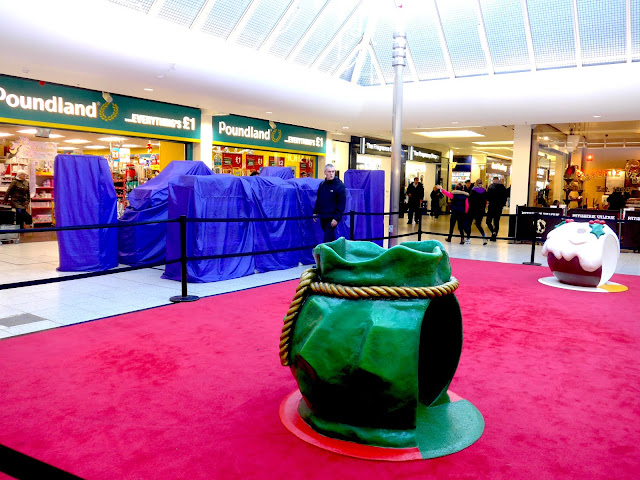 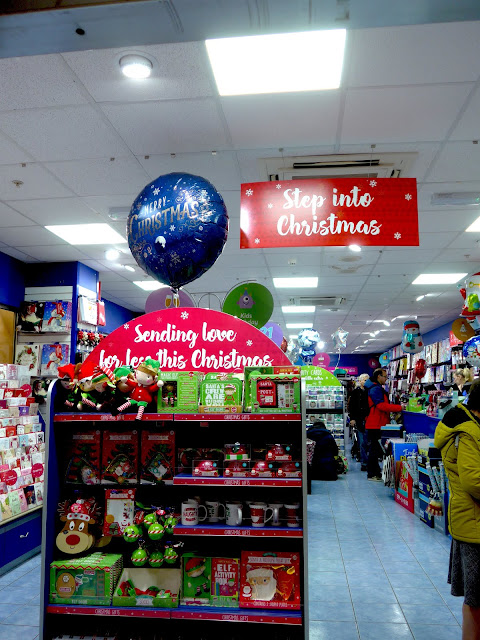 Brexit has forced Christmas even more into the spotlight this year. There's a palpable air of festive desperation in the shops - let's forget the political chaos and forge ahead with total green, red and gold indulgence. Plan your perfect Christmas lunch, tree, TV watching schedule. Do it all NOW. Except the shops appear somewhat deserted - at three o'clock in the afternoon I would have thought they'd be under shopping-siege.

Finally, back on a train.
The youth assured me the charger would work, and indeed so far it does plug into the phone but there's no plug socket on this now-delayed train to try it out with. Ah. Train is moving. Everyone is settling down with tablets, computers and crisps happy in the knowledge that finally we will be reaching our destinations.
Nope. We have arrived in Eastleigh and are now apparently stuck behind a broken down freight train.
An hour later.
The freight train is irreparable. We are all being asked to get out and wait until something else happens. A feeling that I am in some weird purgatory has mantled itself about me. I will be forced to live out this afternoon of Woking-exploration and investigation of Eastleigh station. Forever.
I have joined a queue in Platform two's café where a slight air of rioting over the remaining sausage rolls is noticeable.
No - wait. News of a train that might be going to Bournemouth. Mass surge over to the Cross-Country train (different train company - Please, please, France DO NOT privatise!!!) I squish on with everyone else and we wait in the corridor next to the loo which looks surprisingly like a bad Dr Who set. Eventually the train moves, and, as humans do in times of minor chaos, start interacting.
The woman next to me and her friend have both just taken their girls up to perform in a dance event at the ex-millenial Dome. Another woman has been to stay with her daughter in Islington, and another a shopping trip to London. We chat about trains, the new Queen film, joke about the loo door swishing open as various of us make use of the facilities, and it's . . . nice! I borrow one of their phones as mine has died, blag some water from another, sweets are passed around and eyebrows raised at the young couple engaged in passing the time without talking . . .
If the shared train mess-ups hadn't happened we'd have all been sitting silently prodding away at screens, safe in our own individual spheres.
An hour later at Bournemouth, two of the women and me are going to share a cab. We find one, carry on talking, now about London and the cabbie joins in at my mention of Muswell Hill.
He: "I was born there."
Me: "No . . . so was I!
When the other ladies get out we continue reminiscing over life in Muswell hill, our respective schools, lidos, that sort of early concentrated orange juice, the first Sainsburys on the Broadway, Saturday morning pictures at the Odean, cafés, pet shops, the view over the rest of London at night . . . When he drops me we realise our mothers followed exactly the same life-pattern - leaving London to start a new life in Wimborne, only a couple of roads from each other . . .
We exchange a last few 'wow, weird' comments, he gets my case out and I gratefully enter my cousins house to be welcomed with tea and suggestions of hot bath, soup and electric blanket. Things that might have seemed part of a faraway dream while waiting on Alton station's freezing platform nine hours ago.
Posted by writing and other stuff at 23:40