It's what Mum used to say.
I can recall the slanting triangle of light in my dark room as the door closed and sleep beckoned.
I've been saying it to her for the last two weeks as she has lain in a hospital bed, death beckoning.

I suppose I've never really dwelt on what the actual end of her life would be like - not perhaps something any of us care to spend much, if any, time thinking about.
I got the call over two weeks ago from her nursing home. 'She's had a stroke and the ambulance is coming'. I booked a flight and arrived at the hospital on a drizzly early evening, to find she was no longer responsive to voice or touch - as far as it was possible to know.
Mum was made of tough stuff. That, I never doubted, but I never would have imagined that she could have survived for eleven days once fluids were stopped. Yes. They do this. I'd always thought that once Palliative Care is decided on that the person is made comfortable and just fluids are given intravenously. But, no. Everything stops and it's just a matter of time . . . and in Mum's case, a very long time.
My cousin, and wonderful human being and retired nurse, came in every day and shook her head in disbelief at Mum hanging on. One of the things she could never understand in all her nursing career, and I totally agree with this, is why people cannot be helped to go when nothing else can be done. Apparently, if Mum had been moaning and thrashing about, they would have been able to inject a little opiate-help into her system but because she was deemed to be 'peaceful' nothing could be offered. As it was, I had to endure her dreadfully slow decline each day, hoping desperately that she wasn't aware of anything, other than earlier on perhaps, some of my heartfelt words of thanks to her for being an amazing mother, happy recollections, poetry readings and the touch of my hand in hers.

So, this morning at 4.00 am, I felt nothing other than relief to hear the voice of a kindly ward sister informing me that she had passed on. Of course, the reality will hit, but for the moment I'm just glad to be able to arrange the funeral for her - a willow coffin in the very beautiful woodland burial ground which oddly and happily is just very close to where she was born and lived for most of her life.
Yesterday, feeling at some very low point, I decided to take the afternoon off from the hospital and went to Bournemouth to look at the sea. I walked along the cliff path, felt the very blustery wind, observed the zipping clouds and gazed at the green restless sea; after which I had a cream tea in the wonderful old Miramar hotel looking out over their lawns and sea view. It seemed a fitting way to honour Mother as the sea and cream teas figured very highly on her list of favourite things.
Afterwards, I returned to the hospital and sat for a couple of hours talking to her and reading before leaving with the words at the top of this post. Did I know it might be the last time? Maybe. Maybe she had finally realised it was time to go. 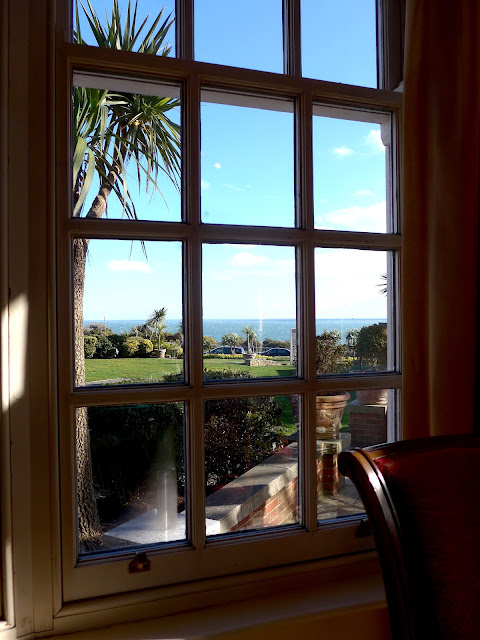 Eight years of voyaging backwards and forwards to two different nursing homes. Good times and sad times; time spent with Mum on wheelchair walks along the river, trips to the sea, around town and museums; time spent with my lovely and generous cousins who have put me up and cared for me over these years; time exploring this beautiful bit of Dorset where I lived as an adolescent.
The end of an era.
Goodbye Mum.

Posted by writing and other stuff at 23:38