While travelling from France to the UK recently, I was struck more strongly than before - possibly as I my trip concerned absolutely nothing of frivolity (refer to next post when it eventually appears) - of how current human life seems to revolve around shopping and acquiring stuff. And most of it being plastic-centred.
Stansted's airport's shopping maze just said it all really with an unintended pre-apocalyptic message. I bought a banana encased in its own wrapping and travelled on, noting the Central Line had been entirely taken over by Apple's latest marketing strategy, and eventually arrived at my destination. 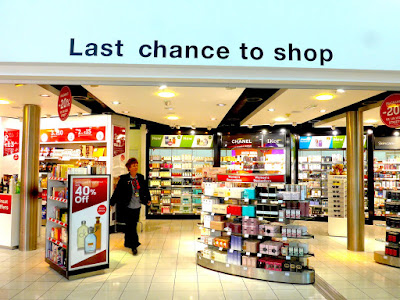 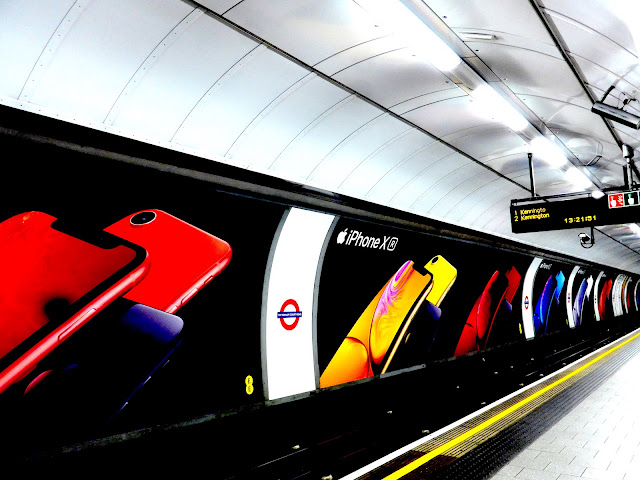 I stood in Boots yesterday after going in search of toothpaste (nothing at all available in a metal tube, of course) and felt very frightened by the shelves, aisles and displays of mostly totally unnecessary products. I've felt this sort of creeping worry for years but yesterday it was more of a looming awareness of some unpleasant end of the way we choose to exist, and not as far off as most of us might think.

Below, an extract from, The Mad Dog Café, part three of a trilogy I wrote back in 2013, in part concerning the state of play regarding overconsumption. Cameron has gone to stay with his hoarder parents and sister in Scotland.

Andrea nodded. "Yes. It's fine, a room will do - somewhere I can shut myself off from everything and the parents. They're happy about it, someone in the house to help as they get older, and no overheads for me."
"It sounds a good arrangement," said Cameron, shuddering at the thought. "What are you going to study?"
"Philosophy and economics. I’d already done an Open University degree a couple of years back when I was beginning to question my blind faith. What happened rather clarified my thoughts."
"Will you look for a job?"
"Maybe something part time, but there's really no point."
"No point?"
"Cameron. Go back to your life and live it to the full, while you can."
"Meaning what exactly?"
Andrea looked at him with her large grey eyes, brow furrowed. "Don't you ever wonder where we are, us, the human race? Don't you feel everything has accelerated far too quickly?"
"Well, yes I do, but we are rather cut off from what most people would think of as normal life. I suppose I don't dwell on it too much, we're so busy with the restaurant and everything, the kids . . . "
"You should perhaps dwell on it. Just think about Kirkaldy for example – six supermarkets, six! in this relatively small town. Each supermarket is stuffed to the hilt with food, but not just food – choice. Choice. It's an evil word. We've come to expect choice of everything and the manufacturers use that, more and more, and more choice of things we don't need. Do you remember that first Sainsbury's?"
"Not really, no."
"Well, I'm older than you . . . Mother used to take me there when it first opened. I can just recall the yogurt section, there was one, or perhaps two brands, and they offered plain, strawberry and toffee, that was it!" How much choice do we need?"
"None really, we just make our own yogurt and add things to it."
"Exactly. That's what people used to do. But it's most worrying when you start thinking about it on a large scale. Kirkcaldy. Six supermarkets, each with a yogurt aisle five yards long – Fife with a population of around three hundred and sixty thousand, shopping in probably thirty supermarkets each with five yard long yogurt aisles. Scotland, how many supermarkets, how many shoppers, how much yogurt?"
"And that's just yogurt," reflected Cameron.
"Yes," Andrea continued, "think of everything else apart from food. Cheap jewellery, televisions, toys, toiletries; mountains of plastic in each supermarket or electronics store in each town. The way the goods are produced, the water used, the pollution, the conditions people live in who make most of this stuff. The planet can't support this. Children need to be taught about real life, earth, plants, skills that have been forgotten, while there's still a chance."
"You think it's too late."
"We got lost somewhere. We reached the point and moved beyond it."
"You mean it's all downhill from now?"
"I think so."
"So, when was the point we should have slowed down."
"I often wonder about that. Probably before computers really took hold, perhaps in the mid-seventies."
"We'd still be stuck with shag-pile carpets and terrible fashion."
"It's not a joke, Cameron, our governments can't even unite to stop the production of plastic bags let alone nuclear warheads. Something is coming . . . look at the weather, how long ago did we see the sun here? Cameron, go back, grow your garden, teach your children, make something for a different future."
"What are you going to do?"
"Learn, write, teach perhaps, make a small difference if I can. I'll look after the parents, I don't have other responsibilities like you do."
"I said I'd help them clear things out, do some alterations."
"It's not that easy, it would take months and they don't really want change. I'm fine in that room and they have money to do repairs, I'll deal with it. Go home."
"We'll keep in touch, Andrea. It's so stupid that we never have done."
"I've changed and I don't blame you for not wanting to know the old me. Yes, keep in touch, if you like."
Cameron stood up, cold from sitting too long in the chilled room.
"Come and visit."
"No, I don't think so." She smiled a little, stood up and went towards the door with a pile of plates, an odd figure; a school teacher from the nineteen-twenties in her long dress and bobbed grey hair.
"Goodbye, Cameron."
Cameron went upstairs to the bathroom pausing on the way to look in the box room.  It could have been a monastery chamber with its white walls and single bed; the upside-down metal cross on the wall made it less likely however. On another wall hung a print of an apocalyptic John Martin painting, the menacing clouds and crashing sea, strident against the plain paintwork.
Under the window lurked a small desk covered with papers and books. Cameron glanced at the titles: World Economics. What is Faith? Panglossery versus Pessimism, Back to the Land, The Road.
A large semi-dismembered bible lay on the left of the desk, its pages scattered, some Sellotaped to the wall, paragraphs circled in red.
He left the room, suddenly aware of trespassing into a life, a life that should have been known to him, but was not.
He closed the door quietly, and went down the corridor to the bathroom. The light bulb had gone; Cameron peed in the semi-darkness, the room's cluttered contents lit up intermittently by a guttering street lamp.
He moved through the wreckage and looked out of the window. The rain still hammered down, the black silhouettes of the trees waving wildly.
Andrea was right. He would go back, tomorrow, early; the parents probably wouldn't even notice.

Posted by writing and other stuff at 05:40