Or somewhere between the two.
Douglas Adams had a theory, or rather there was a theory in the Hitch Hiker's Guide to the Galaxy, that all missing Biros slope off to some other planet and actually live a completely separate Biro life. We have the same problem with scissors, Sellotape, glasses, dog leads, well, mostly everything really. But yes, there never is a Biro when you want one, only a broken yellow pencil.
Today, a friend and brilliant wood-worker made us a shoe 'station' for our hall as I was fed up with corralling all the footwear, into various places in the house which never worked - like, the under-stairs cupboard, a dark and fetid place where shoes were piled and squashed under coats and bags.
When he had made the afore-mentioned wonderful item I had to CLEAN things and Turn Things Out, as my grandma would have said.
There was a fantastic fluff collection and a lot of 'Oh, that's where that went' stuff behind the cupboard - then on to the key cupboard. I emptied it all out and discovered that no one had any idea what at least half the keys were for or where they had come from.
Where do keys come from? Why can you never find a pen, but lots of unknown keys instead? Are they lost by someone else and end up our place, or are they ones from some previous house/cupboard/gate/garage and we have just forgotten. I've put them all in a box for now, and perhaps we'll remember what they are for, or I'll open the box, or Ezra will in forty years time, and nobody will any the wiser, but they still won't get thrown out - just in case, even though he may be living seven thousand miles away from this house. 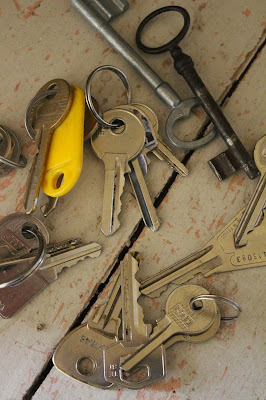 Maybe I should melt them all down and just make one really big key and a huge door to go with it; or maybe I just need a nice cup of tea. Yes that sounds like a great idea.
Posted by writing and other stuff at 10:45