Having spent two hours with a 'dog-whisperer' yesterday to try and get our big dog to view Mark (husband) as a non broom/axe/spade-wielding maniac, I was surprised to learn (in the Guardian) this morning of the huge amounts of dog consumed in North Korea. I think I knew people eat dog (and I probably would if there was nothing much else available) but having seen what even our fairly well behaved dogs will snack on, I'd have to be fairly desperate. 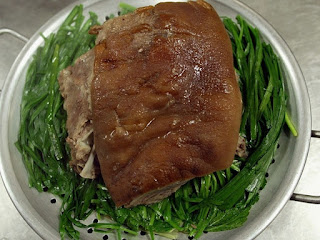 Dog soup is apparently eaten more in the hottest summer months - forget salad and gazpacho, hound is the thing in order to revitalise the body and deal with the extreme heat especially the three meltingly humid days called 'Sambok'; the definition of which is impressive for a modestly-lettered word. Sam = three, and Bok: To lie face down because the summer days are so hot even a frog cannot endure it, lying flat with its stomach stuck to the humid earth.
We are experiencing our own impressive heatwave at the moment: well-over thirty for . . . I don't know, seems like forever, a month? but so far I haven't felt the desire to eat much soup (apart from a rather good tomato and apricot concoction a friend put in our fridge yesterday) let alone dog. So potent are the vitamins, etc, contained in the soup, that, apparently, 'even spilling the broth of dog meat soup on your foot during Sambok is good for your health'.
I think the hothouse residents need a few heatwave (Canicule in French) quotes.
Mm . . . Bok: To slump on the terrace, one's rain-forest armpits a never ceasing river of sweat; the thought of creating food more complicated than an egg sandwich an utter impossibility and walking to the postbox more challenging than crossing The Grand Canyon, with or without a thermos of dog soup. 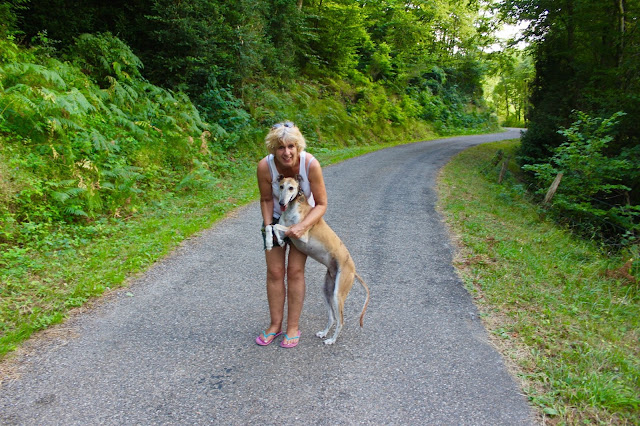 Non boiled dog - just quite hot
Posted by writing and other stuff at 00:28