Runs in the family...


Add two table tappers, throw in a huge dollop of musical training, a spoonfull of misspent years at college listening to dance music, and vast array of weird objects that go clank . . . and you have boy who is NEVER quiet.
Here be the 'sofa session'.
Posted by writing and other stuff at 08:51 No comments: 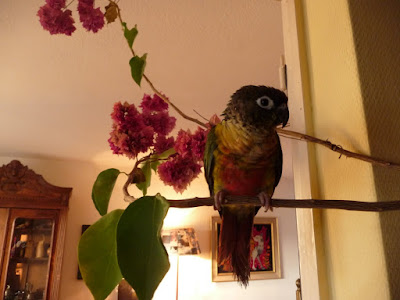 New Christmas arrival. Not the baby Jesus, but small parrot creature to add to the rest of the animal collection, and all the detritus that goes along with them . . .
Actually, it is charming and sweet and its favourite perch is Mark's head.
Posted by writing and other stuff at 15:52 No comments: 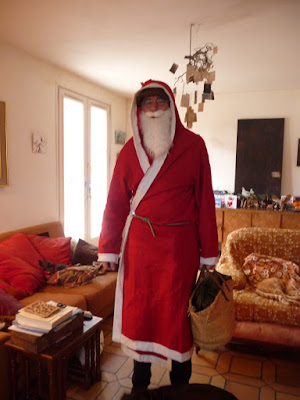 Posted by writing and other stuff at 15:46 No comments: 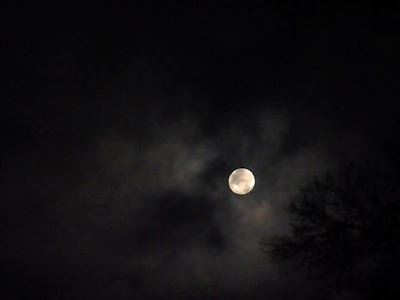 This is a photo of the moon yesterday morning.
I had ventured outside expecting to see a apocalyptic red sky. The Guardian had said there was going to be a lunar eclipse over the U.K and I, even though not scientific in the least, had assumed some of this spectacle would have spilt over into the skies of Southern France. Nope. But, quand meme, (even so) rather an atmospheric sight.
Posted by writing and other stuff at 09:00 No comments: 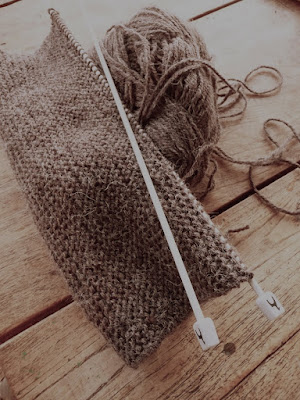 Line from one of Keane's monumental tracks . . . thought provoking as we have just come back from the funeral of Mark's mother.
We must all do as much as possible before we all slip into our own runout grooves.
Important things: family, friends, cooking, writing, art, music; stuff as much nature into our gardens as possible, hill-walking, sea-swimming. Less, T.V, less moaning, less buying non-useful objects. Talking of such, Liverpool shops were crammed with enough happy yuletide socks, chocs, digital photo frames etc to create a shift in the Earths orbit, but as all other major cities around the festive world are no doubt equally overloaded its probably okay.
Enough soap box griping. I'm going to retire to my fireside chair and take up my KNITTING.
Have recently re-discovered this ancient art of making shapes with hairy thread. Strangely theraputic, time slides by in some other cosy, woolly dimension; all those lost moments when one is waiting for everyone else to get ready or the kettle to boil are magically transformed into the construction of . . . well, in this case, a grey wool Dickensian scarf for Mark, complete with atmospheric moth hole scatterings if my last attempt was anything to go by.
My first venture into knitting was about 1974 when Tom Baker was Dr Who with his mile long striped scarf. I was in love (?) with Douglas . . . something, in our class. To show my ardent love, I made him a replica of the famous scarf, which he really liked, but obviously not me as he dropped me for scary Angela and her two assets.
Gap followed of many years until college where as well as working sometimes, I made a mad hairy jumper with one arm about ten inches longer than the other. I loved this garment, wore it often, until graduation day when I ate a bunch of fresias on top of a huge cocktail of drinks, and decorated the front of it.
Next knitting milestone. More of an observation, than a physical interaction with wool and needles. One of the things that impressed me about Mark when I first met him, apart from his prehensile toes, and ability to play the accordion (not with toes) was that he was wearing a jumper he had knitted himself. The fact it had 'A Ha' in big letters interwoven on the front didn't put me off; odd this.
And so to the present day. Not a great knitting history so far, but I hope to continue with it, beyond this scarf into . . . dog coats? car seat covers? knitting therapy in the South of France?
Posted by writing and other stuff at 10:58 1 comment: 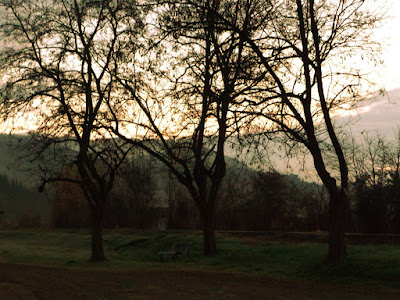 Am at the moment alergic to computing. Will hope not to be in not too distant future.
Here be image of my favourite three trees in our lane.
For no great reason except they should be on our Christmas card if I ever get round to sending them out.
Posted by writing and other stuff at 14:39 No comments: