As in the words of Mr Orwell. Four legs good . . .three legs better.

Runty dog stakes his claim at 'tea-time' with his own brand of hideous growling.
The pack psychology is always fascinating at this time of day.
These two protect each other from ferocious poodle-attack, snuggle together on the sofa, sometimes in a cheeky threesome with the cat, but . . . tea time - forget it. Every dog for themselves. Una is such a street dog. Long after everyone has sloped off to bed, given the choice she would still be out there, a lonely silhouette, hunting for the last nano-grain of rice or atom of minced up God-knows-what, and dreaming of the next tea-time.
Posted by writing and other stuff at 08:11 No comments: 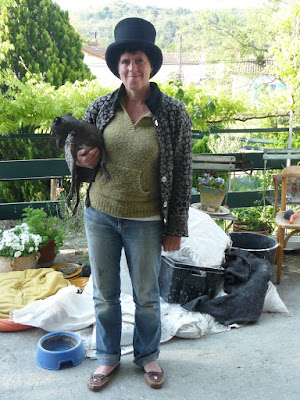 Every year since I have known Mark we have spent Valentines day either apart due to a gig/work generally, or it has passed by unnoticed. Odd, when shops are suddenly transformed into red, pulsating flower filled dens of . . . romance, well, not the dog washing parlour perhaps, but all others that can think of an excuse to sell more of anything.
This year Mark is in Brum on Valentines day, but a bunch of red roses had been left (with price tag) on the kitchen worktop. Yes! We are edging ever nearer to a full blown MEAL OUT in candlelit restaurant situation. Thanks, darling. I was going to embarrass you with a single red rose via interflora turning up in the middle of a world music lecture . . . remember that?? BUT, I got sidetracked into helping with other people's burst pipes.
When Mark rang me this morning to say something lovely, I think he was anyway, I looked exceptional. This photo is the closest representaion I could find, except I wasn't wearing a top hat and the dog now only has three legs. But you get the idea.
I would like to have been attired in a flowing, pink, Bette Davis gown, languidly holding three bouquets of roses from various admirers . . . was actually in filthy jogging pants, leopard skin slippers clutching firewood, and with hair like a wookie.
Next year . . .
Posted by writing and other stuff at 08:04 No comments:

Email ThisBlogThis!Share to TwitterShare to FacebookShare to Pinterest
Labels: looking fab for the most romantic day of the year.

Oh no, not again 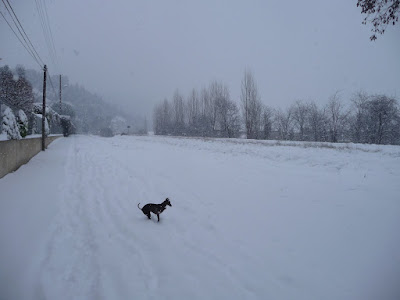 Some people are saying it's going to snow again tomorrow. They are lying. I predict a light drizzle of sleety vile substance, and then a good downpour of RAIN on Thursday to wash all this half arsed grey-white residue away. Then the sun will shine madly, temperatures rising to a balmy 12 degrees on Friday. Birds will tweet, dogs will once again lie in the warm rays on the porch, and we might venture outside with less than eight jumpers on.
I could be wrong, but am wallowing in new found optimism after huge close-to hibernation sleep yesterday.
Shouldn't moan anyway. But then . . . why the hell not. Some folks love snow; my friend is in the Alps on the family sking trip. They love the fact that it is -15 and there is more snow than they know what to do with. I don't. I prefer it to be at the other end of the spectrum: 37 degrees, fine.
People always seem to say that big heat is worse, and at least in cold weather you can put more layers on.
There is a limit to how much clothing you can put on at once and still fit though a doorway.
Here is a pic of the tiny three legged beast barking at a terrifying recycling bin just out of the frame.
Posted by writing and other stuff at 03:17 No comments:

Email ThisBlogThis!Share to TwitterShare to FacebookShare to Pinterest
Labels: moaning generally about weather 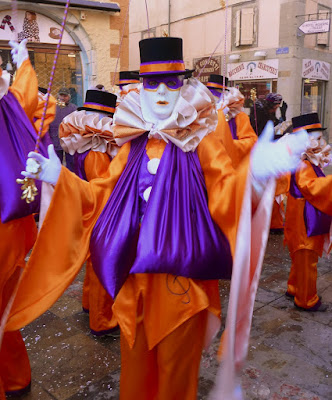 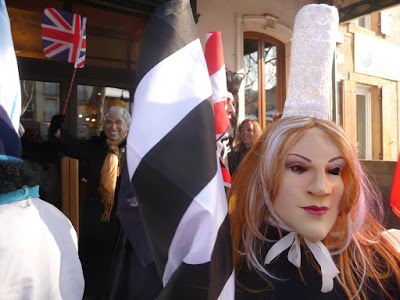 If you were in Limoux yesterday morning, you might have glimpsed the royal personage opening the olympic games,(Les Droles version.)
God, it was cold . . . about -4 in the morning and I was dressed in light sportswear. Going up to a balmy -1 for the 5.00 p.m sortie, and -6 or 7, with severe wind chill for the last tour. Vast quantities of pastis, blanquette and hot chocolate consumed in order to keep warm. Quiet day of creeping about in nasty pyjamas today.
Posted by writing and other stuff at 03:27 No comments: 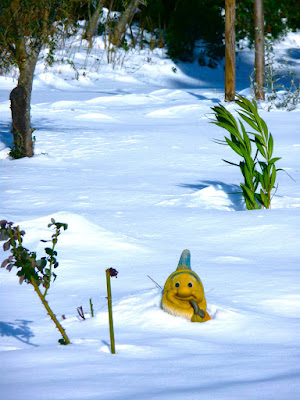 A whole new meaning to being up to your neck in it. Sorry Bert.
Posted by writing and other stuff at 12:16 No comments:

Ezra on frozen winter day playing sounds from the deep south.
Posted by writing and other stuff at 00:12 No comments: 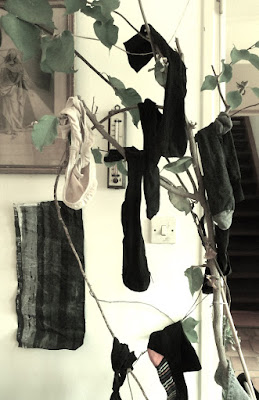 I was reading the other day about Bougainvillea plants. In parts of America where it was too cold to leave them outside, as it is here, they would be brought in their pots and put near the stove to winter.
What it didn't say was how they are very useful for drying your underwear on if you don't possess a tumble dryer.
Yes, I have slight cabin fever due to huge snow coverage. We did however make it down to the square to see the Carnaval with it's very small but cheery crowd of onlookers. One of the trumpet players said they did the 10.pm sortie yesterday and it was minus six. Urgg, frostbite in all extremities I would imagine.
Posted by writing and other stuff at 11:45 No comments:

'COME ON ALGERNON' from the film 'CHAMPAGNE CHARLIE'

Just had to post this from one our favourite films, 'Champagne Charlie'; a must for a festeringly cold Sunday afternoon such as this.
I watched a video clip of Madonna's new single yesterday. What has this to do with a 1944 black and white film, you ask, if you are not already asleep in an armchair with a cup of tea and a dog. Interesting comparison I thought. There's Madonna at the ripe old age of ? waggling her bits about in an attempt to challenge Lady Gaga to pop sex Queen, and here is Betty Driver doing it with so much more style. Bit more clothing, but check out those 'oo er misses' words.
Posted by writing and other stuff at 03:49 No comments:

The carnaval de Limoux continues.
I read in the paper this morning at the Café de Commerce, that all sporting and exterior events had been cancelled in the Aude.
In Limoux, happy crazed folks dresed as giant babies clasping plastic bottles of pastis with teats on them, danced around the square. Due to the wind-chill factor of about minus fifteen, there was only a few people watching, the cafés stuffed instead. A great shame for the group, as the preperation for this one day a year is immense, and it's always a gamble on the weather.
Our group goes out next Saturday, and I am praying for a slight rise in temperature at least. Holding one's hands aloft in skimpy polyester gloves for many hours in freezing conditions is not fun.
Here is a film of the other group out today. I wish them all luck for the late evening 'sorti'. By ten o'clock it will be mind numbingly cold and the crowd will presumably wither to a lone dog. Everyone else, including me, will be in front of a fire, eating comfort food and watching a film. Sorry carnaval.
Posted by writing and other stuff at 08:42 No comments: