Many, many posts back I wrote about a neuralgic pain that appeared in my face; it returns from time to time, always shifting slightly, always a slightly new unpleasant sensation. It has a connection with a throat issue I've also had for years, even though various 'specialists' more or less told me to stop informing THEM about stuff I knew nothing about. But it's MY pain, a jabbing,  a sly little knife that prods away at my unsuspecting tissue; not theirs.

Anyway, 'bref' as the French say, I saw someone remarkable the other day; a very young woman neurologist who actually listened, actually examined the afflicted areas with care and interest. Not that she could draw any real conclusions without further scans (being trapped in a tube with Japanese Noise Terrorism playing over well intentioned carpet ads and local news), but it was a huge relief to actually talk to someone genuinely helpful and knowledgeable.

Anyway, anyway . . . the point of the post . . . one of the things the pain really gets going on is me looking at screens, including my writing on the laptop. So, I haven't for a month - sob. After a brief hunt on 'le Bon Coin' I found an old and very cheap 70s Tippa typewriter; not as beautiful as my old black 30s one I wrote my thesis on and then sold for a pittance at some later date (VERY pricy now, dammit!)

It arrived a few days ago, swiftly followed by the new ribbon spools. We set it up and I've 'launched' - slowly and with many mistakes into the new book, at present called, Outcrier.

Stopping now as the pain has woken up and is threatening to indulge itself on my overuse of screen time. Back to the slower but rather interesting writing process. 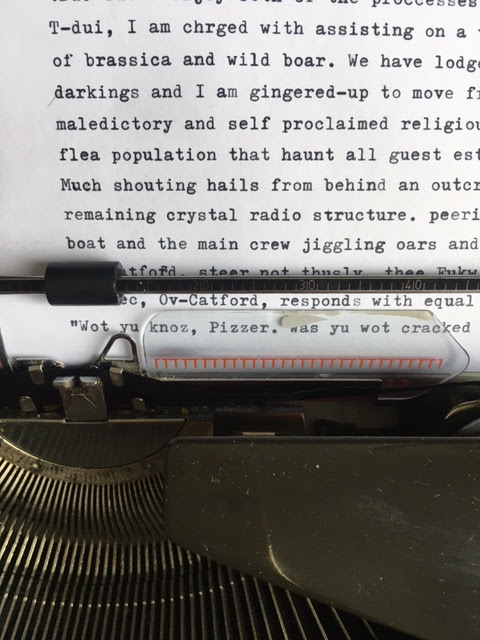 Posted by writing and other stuff at 10:03 No comments: