View from the Hill, a 70s London childhood. The Broadway.

On my last post I wandered off following some memory that had suddenly prodded me. I had wanted to describe the actual hill of Muswell Hill and its aforementioned (70s) view, so will now.

If one stood at the edge of the hill near the bus and taxi rank, London in all its myriad of greys would stretch out dizzyingly, the vague forms of distant hills just visible, and of course the magical form of the Post Office Tower, where Andrea's dad was said to have dined out in the revolving restaurant. My God! Such exotic behaviour! But these were the times when going to Spain for a holiday was not unlike Mr Branson's space jaunt - impossible to imagine for anyone I or Mum knew, although I think Andrea's family did go to Benidorm, and they had a colour television. The view from the hill now looks very different with the clutch of steel and glass, gherkin, walkie-talkie and fat penguin edifices rising in the city's middle. 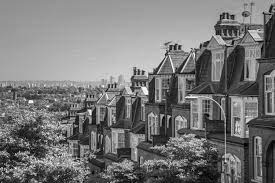 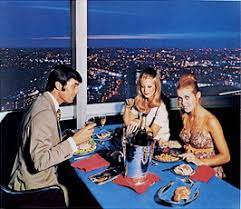 I was conscious of the view from other points too such as the top room of my friend's house just down from the milk depot and from the kitchen of a flat which was the top floor of Midland bank. Like so many early childhood memories, I now have no idea who the people were that inhabited the place, other than I was dropped off there sometimes when I was about five or six while Mum did . . . something. Worked? socialised? I know there was a large wooden canoe hung on the hallway wall and that two of the boys hated me.  I did once ask Mum about who the family were but she couldn't recall either so it remains a small mystery, but enough to make me wonder whenever I see a Midland bank - or not as they are now HSBC.

My aforementioned friend's abode was possibly a hoarders house; typically, as a child I just accepted it as how it was but looking back now, the unwashed pans from multiple lunches of tinned macaroni cheese, drifts of books, newspapers, clothes and heaps of unspecified items was possibly unusual. Her mother appeared to possess two records - A night on a bare mountain by Mussorgsky, and King of The Road by Roger Miller. I only have to hear 'Trailers for sale or rent...' and I'm back in that fusty room with its distant view of 60s tower blocks.

One of my strongest memories of the hill was sitting in a cavernous (or it seemed to my seven or so year old self) café which used to occupy a space to the top left of the hill as you came up from Holloway. The place was always thronged with people and waitresses; possibly one of the last Lyons tearooms? Mum would afford us a rare tea and cake and I would sit looking up at the electric bar fires that were suspended in the roofing; an orange glow as warming as Heinz tomato soup on a chilly day. One time when we were sharing a table, the other occupier seeing me drawing something in my book (probably a cat or a dinosaur) offered to teach me about perspective. I wish I had kept the napkin on which he had drawn a railway line, train cables, trees and fences, streaking away and as complex as a Uccello painting.

We also used to very occasionally frequent the Lantern Café for tea and that sort of butter-soaked white toast that only certain cafés can fabricate, and something that Mum would never allow at home, brown bread being the only healthy option. The Lantern was the sort of eatery that is now a rarity; a place of dark wood, red checked tablecloths, cottagy pictures - warmth, safeness, things shunned from our current restaurant styling of over-lit, sterile grey and white. I suspect as world events compound in complexity the checked table cloths and candles in bottles elements will return...

Cafés apart, another establishment of many memories still stands on the Broadway, Martyns the dry goods grocer. Thankfully untouched by modernisation, its handsome black and cream facade and large windows display a wonderment of dried fruits, cakes, biscuites, speciality teas and so much more. Back in the 70s, Mum, as mentioned in the last post, didn't have much of a food budget (Marmite was a real luxury) but she allowed herself coffee beans and sultanas from Martyns. I would stand in the shop like Charlie Bucket and breathe in the smell from the roasting machine as the beans shoosed and rattled around in their pierced metal drum. I've visited the shop on numerous occasions during my adult life London-wanderings and have marvelled as I've bought a bag of dried pears or peaches at how nothing, really nothing seems to have changed in the shop since I was a kid; a strange unaltered miniature world amongst the continually altering city. 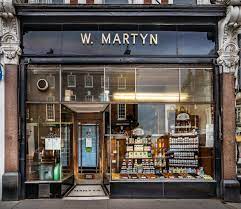 Posted by writing and other stuff at 12:28 No comments:

View from the hill, a 70s London childhood.

I am currently reading Alan Bennet's Untold Stories - I think a present from Andy if you read this.

As I turned the first few pages I found myself thinking different things: why should anyone be interested in the minutiae of someone else's life and childhood? But then why not? All experiences are interesting, to me, anyway. Some folk stifle a yawn as a relative or friend turns pages of a family album - 'that's Aunty Bess in about . . . hmm, 1978, perhaps . . . when she had that job at the first Sainsbury's in East London'; or recent photos lost in a technological maze on an iPhone - 'us in Paris', 'the best pudding I ever had' or, 'Your Dad and me at Sarah's wedding when the cake collapsed.' All human stories, things we can relate to or not; things that provoke memories, cause tears to rise or a smile to stretch.

As often the case, an idea surfaced as I walked the dogs and filled holes in walls this morning, which then refused to be packed away again. My own London child/adolescent-hood. All those little memory chinks that wend their way into most of my writing. How much more would be buried behind the so-many-times replayed recollections. So, between the jobs, Gite construction and editing, I'll write out some of the memories and see what occurs. Bitty, no format - no time for the foreseeable.

The view from the Hill.

The view being Muswell Hill. One of London's high points and very much my world between the age of whatever age I was when memories started forming until about thirteen when we moved from North London to the gentle rounded hills of Dorset.

Muswell Hill was the center of everything - school, the pet shop, buses to the West End, the road where Nichola Stott's family lived in their rather handsome Edwardian semi. She was one of my best friends, freckle-faced, long red hair and as tom-boyish as I was. I don't recall much about the house other than the attic where we played and once decided it would be fun to scratch off a large portion of the polystyrene cladding. It had fallen as gently as snowflakes, and we had laughed until almost peeing ourselves. My mother, always feeling in the shadow of house-owners and seemingly established couples generally, had come to remove my seven or so year old self, red faced, apologies streaming. Maybe that was the last time I visited the Stott household. I don't recall Nicola visiting our more humble abode on Colney Hatch Lane. 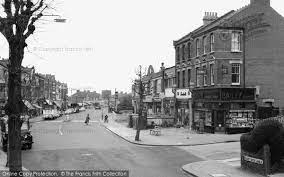 Colney Hatch lane in the 60s

And it was quite humble. A one bedroom, rented ground floor flat in what is these days a prestigious 40s (I think) block, surrounded by, for London, ample and well treed grounds. Mum shared the front room with her precious piano, table, large armchair (which I recall sitting in and crying while listening to Yesterday by the Beatles), second hand jade green Wilton carpet and her single bed which doubled up as a sofa - long before the days of Ikea Click-Clack. I had the bedroom which was crammed with jumble sale finds, cages of various rodents (depending on the phase), toy cars, and later walls adorned with the usual poster pop beings of the 70s - except mine were all of Rob Davies from Mud. I think I was probably the only teenager in London who preferred his flared cat suits and dangly earrings to Donny Osmond or David Cassidy's toothy grins.

Our kitchen, always warm from stews Mum concocted involving such delights as pigs heart or the marvellously termed, scrag end of lamb, had generous built in cupboards, a china sink, an old green enamel gas stove with chrome metal 'taps', a table and two chairs and a fridge being bought on instalments. Mum, being Mum encouraged my various manias for bringing more wildlife into the already crammed space; often a sweet jar of stick insects or butterfly pupae balancing on the table or sink side.

The bathroom was small, dark and purple but furnished with an ample bath and never ending hot water as all the flats' heating and water were fuelled by an enormous boiler somewhere in the grounds. Mum's stack of 'I'll read them all one day' old Guardian newspapers were for some reason housed in that room. Perhaps she read them in the bath. Those odd knowledge gaps that appear now as I think. Did I know why they were in there? Did she? It's just how it was. Just as we never mused over the spelling of the Fuck Of  that had been shakily scrawled in black paint above the bins at the back of our flat. It had been there for years - part of the block's ornament along with the black crittal window frames and brick framed door entrances.

There, I digressed already. Not so much about the hill or the view but here's a picture for now, although the skyline would have been a little different. 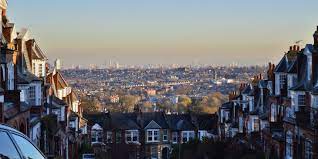 Posted by writing and other stuff at 16:49 No comments:

So, unable to stare at a screen for more than a very short while (see last post) I decided to get on with something requiring scaling ladders and handling raw materials; also something which was on the to-do list anyway: re-doing the mortar in our stone walls. 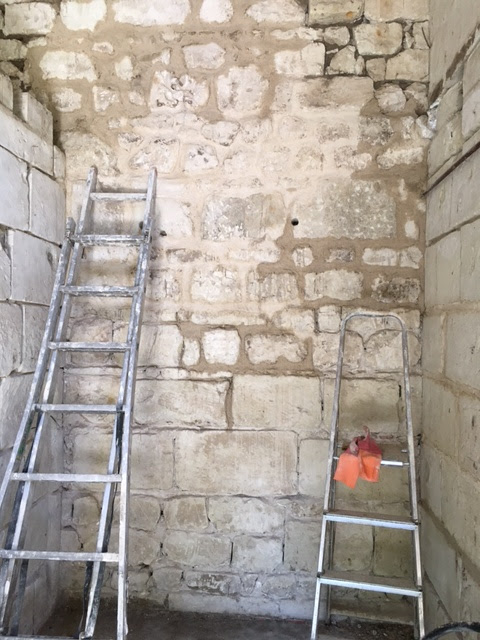 Having earmarked an outbuilding as a gite we'd already got some of the hefty work done - concrete floor, electricity supply ready etc, the rest of it is done to us as the budget is running low. Our son has taken a year out of his studies to help, partly as a learning experience for himself. Luckily, a stone mason friend of his came to work and teach us the basics for a week - valuable time indeed. We now know how to mix correctly the sand and chalk, how to free up the old joints, dampen them, whap in (sometimes with great skill) the new mortar and sponge/brush it out to provide a satisfying surround to the old stone. 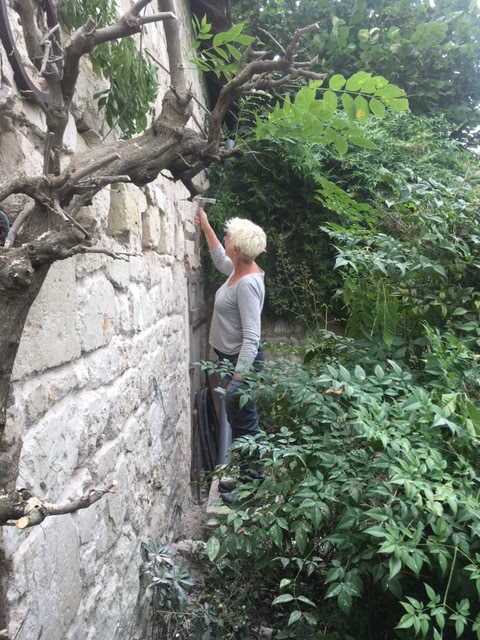 It's a rewarding and tiring occupation - I sleep very well after several hours of the process - but something that can be done between preparation for our bed and breakfast room, and small bouts of computer stuff (hello!) My agent and I having amicably parted ways I am now starting the pernickety and occasionally exciting process of finding a new one. Watch this space as they say...  back to the wheelbarrow and tools now. 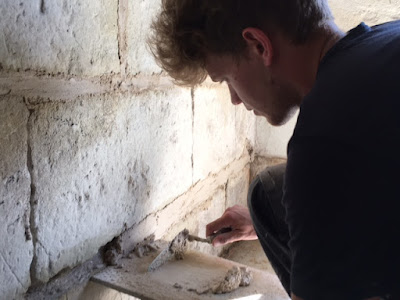 Posted by writing and other stuff at 16:33 No comments: