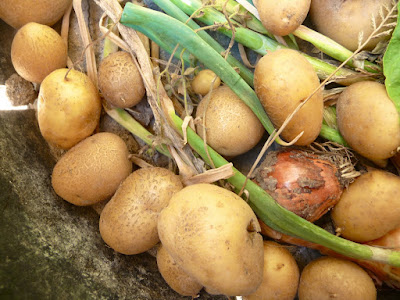 Boil water, put washed but not peeled spuds in, roughly chopped to big bite sizes. When possible to poke with a fork, drain. Heat olive oil to dangerously hot, throw in potatoes and lashings of chopped garlic plus some fresh red chilli if you like things a bit 'piquant'. Leave to stick to the bottom until someone says: "is something burning", turn them over (spuds, not person) and cook until well- browned. Turn into fancy rustic dish and serve with sour cream and chives, home made tomato sauce, or HP is pretty good.
Posted by writing and other stuff at 22:59 No comments:

Yes we love our car. 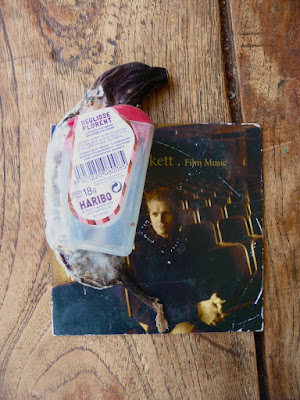 We love it so much. We clean it every Sunday, Mark spends hours with the T-cut getting that deep long lasting shine. Not.
I just had to post this; it could be art, or it could just be an indication of how much the cleanliness of our poor car does bother us.
Its a CD of Mark's film music, with a very black banana skin stuck to it  and a plastic sweet box adhered to the banana with some interesting species of mould. He found it, not when cleaning the car out, but trying find his phone.
Posted by writing and other stuff at 12:58 No comments: 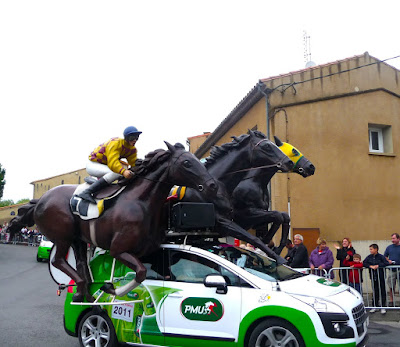 Well it would have been churlish not to go and see them set off - hardly taxing since it was about 100 metres down the road.
It was raining in a sort of Irish mist way and quite chilly. We stood near the fire station and watched herds of adorned trucks and cars with happy (or possibly not) waving people hurling stuff out of windows. Key rings, hats, crisps, useless plastic clacky noise-makers, and much more assorted twaddle. No sample gas bottles were thrown into the crowd when Butagaz or whoever they were appeared, but we did all get sprayed with water by Vittel which was crap as everyone was already wet and cold.
Someone told me that 39 tons of plastic rubbish is produced in the Tour de France publicity caravan and that most of it is thrown away after about an hour . . . don't know how anybody has calculated this but it sounds plausible. I mean what is the world coming to!
A gendarme told me that after the silly wagons it would be about an hour to wait in the drizzle, so we went back and had lunch and returned. Another half hour and it started. Thousand press cars and bikes, police, medics etc and then huge pack of sinewy, shiny, lycra clad men appeared, (I liked this bit). It was impressive, and not just their buttocks; the thought of them all cycling to Montpellier, the huge serpent snaking its way across the département, would be good to see it all from a plane.
So me and Ezra enjoyed the 20 seconds, and then it was all over. We walked back eating small greasy cakes and sporting Skoda hats to the sound of a few melancholic air horns.
Posted by writing and other stuff at 11:37 1 comment:

Email ThisBlogThis!Share to TwitterShare to FacebookShare to Pinterest
Labels: sport in the Aude

no dog is an island 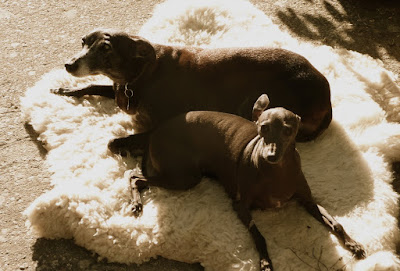 Just got in from mad driving day to and from Montauban, as the boy person wished to explore it (good choice - most elegant place) and then searching for a certain bath in the hideous planet of Castorama in Toulouse.
Returned without bath as it was worryingly long and I was to tired to go and find bungee ropes etc. At least I know where the bloody place is now. Was I just pooped or are French road signs really bad?
Inevitably, there is a sign, then it just melts away at the next junction and says Paris or something, and one has to go back to where one started and drive slowly avoiding collisions with peeved 31 plate drivers, and all the time looking for the elusive blue or green directive, until you see it half a kilometre away under a shadowy flyover.
Anyway I waffle.
The house seems to smell odd these days. I think it might be Una pictured above. She is about 130 in human years so entitled to be a little whiffy. They both wagged so fondly on our return I thought I would just put them on my blog instead of the impressive photo of the bridge in Montauban which I can't download as the USB cable seems to be tired too.
This is an example photo of the extent these dogs need to snuggle. Here they are in about 28 degrees on the sheepskin island instead of that awful hard concrete.
Small dog's leg has been passed by the vet as being fine. He is still hopping though with one dandy leg proffered as if waiting to be passed his fallen silk cravat.
Wimp.
Posted by writing and other stuff at 13:43 No comments: