We don't have many, apart from the modern day 'essentials' - washing machine, TV, computer, soon to be totally redundant DVD player, et al.
The kitchen is almost without any gadgetry apart from the fridge, cooker, a 1970s yogurt maker and a sturdy blender. The boy has been nagging for a juicer but I'm resisting this as the blender does essentially the same job and we have little work surface.
However . . . I did recently succumb to A SODASTREAM. Yes, modern, plastic and quite large . . .
BUT. There are reasons. I love fizzy water but virtually never buy it due to the landfill element of the purchase; cold fizzy water is a great alternative to beer or wine and, well that's it really, but it's taken me about six years of indecision before taking the plunge and extracting my card in Darty - a huge French 'shed' full of domestic life-enhancements.
I did look at the 'retro' styled ones which would fit more with our slightly 50s kitchen but apart from the fact they were hideously expensive they were big and blobby with even more plastic than the basic versions. So I went for a mid-priced one, still lots of plastic but in a fairly attractive sort of badger 'colourway'.
So, is it remotely ecologic? Now I have discovered you can get the gas canister refilled at our local DIY 'shed', yes, I think it probably is, compared to buying bottled water. Of course the better option would be either move next to the source at Pellegrino (if they let you nick the water yourself) or just drink flat water, and be glad of it!
If I ever had the wonderful opportunity to appear on Desert Island Discs (one has to have daft dreams) I might well consider the Sodastream as my item of luxury. A continual supply of bubbly water to refresh myself while exploring, reading and generally lying about . . . if the deal included ice and lemon of course. 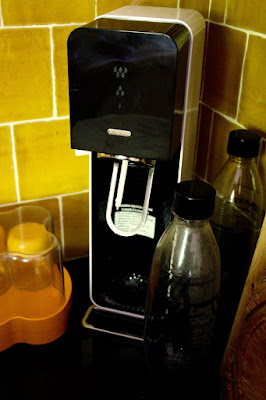 Our black and white 'special edition' sodastream placed next to the 1970s yogurt maker. Hope they get on OK.
Posted by writing and other stuff at 03:22 No comments: 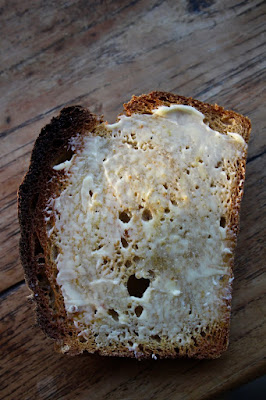 Hey there! it's going to be a great and surprising day!
Posted by writing and other stuff at 03:06 No comments:

Mark and I had helped set up the Wirksworth (Derbyshire) Festival back about twenty years ago.
This year they invited us back to perform something of our choice. As I am currently involved with the last stages of developing my book, Hoxton, I suggested some readings.
Fast forward to just before the festival and we - myself, and more importantly, two excellent actor friends from the town, had more than just readings prepared.
During the day we rounded up props and costumes, and then in the evening they performed while I sat back and watched with amazement, and joy! my written words come to life on stage.
Debbie played Hoxton beautifully and Paddy wowed the audience with his stock of many perfectly-honed accents (he played about five characters linked together by a narrator in the form of 'Jake the Prophet')
Here they are in Hoxton's 'vestry' in St Leonard's church in Londonia 2070 talking about Marmite, (think it was that point). 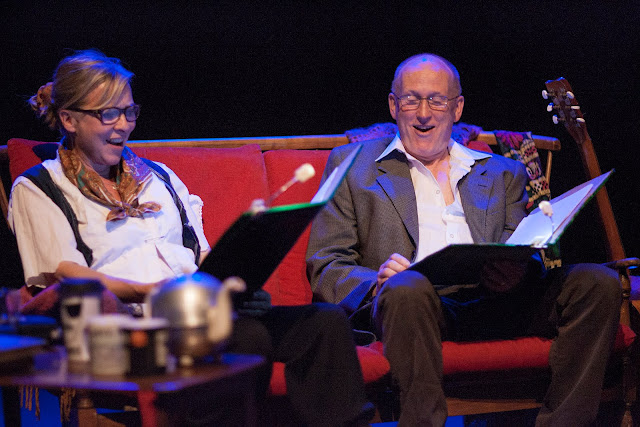 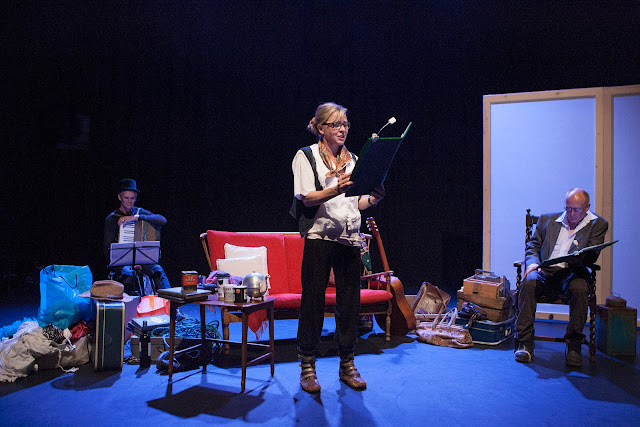 If you are ever in Wirksworth for the festival, make sure you see Paddy and Debbie perform alongside other wonderful actors in the company, 'The St John's Street theatre'. This years play 'All Fools' written by Tony Jones was, as always, a visual and audial treat!
Posted by writing and other stuff at 06:57 No comments:

While sitting in a café recently, I took out my laptop to do a bit of editing and noticed they advertised Wi-Fi free - being in French this actually means, free Wi-Fi, or weefee, with the accent. I thought I might as well check an email or two and logged on.
The list of surrounding weefees was extraordinary - about thirty different 'types' from Orange to Chez Felix or wherever it was that I was sitting. How can you escape all this, if you want to? Difficult. There is a man who lives in a village near us who has apparently spent thousands on 'Bacofoiling' his entire house and himself such is his angst, or perhaps very real fear/reactions to this peculiar air-born, invisible . . . thing.

Being a bit of a luddite myself I can understand the worry over something that has crept into our world insidiously and taken over our waking, and sleeping hours.
I still regard Microwaves with a certain amount of suspicion, and all phones with what I regard as a healthy disregard. Phone = useful device with which to contact or be contacted by people in a situation where information needs to be relayed: 'help, I have driven into a ditch,'  'can you remember to get more cat food,' and more importantly things such as: 'my neighbour's house appears to be on fire.' Most other yakking, checking how many Likes one has or playing Discontented Slugs, or other latest App drivel seems, to me anyway, a tad alien. Hm!
Anyway. WiFi. Mark, being an occasional insomniac like myself, read a report somewhere recently that suggested turning off the device at night was likely to promote better sleep - possibly common sense, but good to be reminded of such things, just as people need to be reminded that perhaps sleeping with their phones under their pillows might not be a good plan (arg! Why would you do that?)
So we did, turn it off, and . . . yes it could be total placebo BUT, I do sleep better - deeper, longer and with even more bizarre dreams than usual (a good thing, I think). I used to wake up at the slightest sound: a dog's collar jingling downstairs, a cat prowling over gravel outside, now - nothing.
It was as if I had been on standby not really OFF; ready to receive information streaming from our small white box downstairs: celebrity hair, Donald Trump's latest verbal gifts to the world, recipes, junk emails from Uncle Amazon; people inviting you to invest in their money-laundering ideas, tweets, reminders, Waitrose wine (how the F did I get onto their list?) gadgets, maps, reports . . . and so on.
The brain needs sleep: big, wide, profound sleep to repair itself and the body, and anything that can be done to assist this is of huge value - just a tiny switch- click-off; maybe it doesn't have any real effect but if one's mind can perceive it as an aid to total night time obliteration - great!
I read this morning about a Dutch study on growing cress placed next to wireless routers. One set of plants in a room with no routers, and another placed between two routers - result, the cress close to the radiation didn't grow . . . mm.
Anyway, just for saving energy alone, everything should be turned off that is normally on standby, and all chargers removed from plugs even when connected to devices; it all adds up to higher bills, general electricity waste and more stuff bombarding our already sore brains.
Goodbye, off to put this onto shutdown, not sleep.


Posted by writing and other stuff at 00:32 No comments:

While looking for images of medieval dogs, I found this fascinating tile: Medieval dog treating cat for melancholia . . . a dog . . . treating a cat for being melancholic . . . Ours would most certainly have eaten the feline before noticing any signs of depression. I'd love to know what the giant strawberry would have been used for. 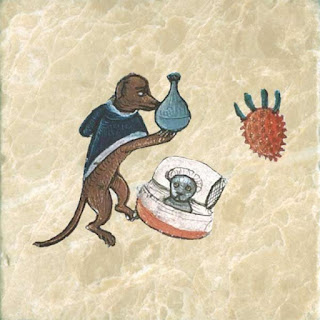 Hurrah for people with sense! 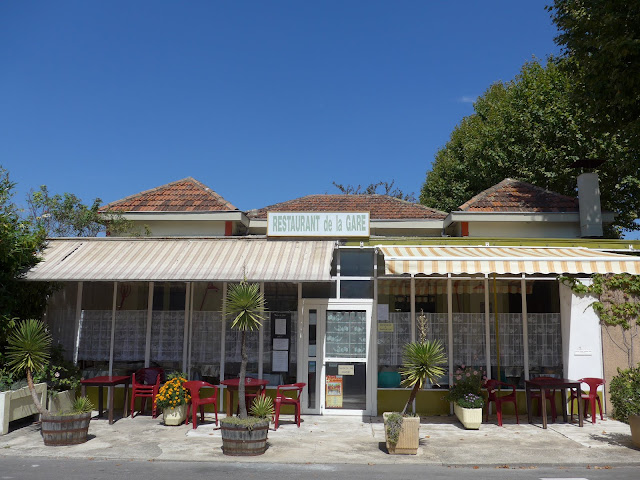 Not much changed, except you can now sit outside!

Our beloved 'Restaurant de la Gare' has been re-opened and not re-modernised . . . well, it has in that they were obliged to update the prehistoric loos and expand the kitchen a little to meet the, no doubt, massively over stringent expectations of the hygiene inspectors. But what was so wonderful was that they had kept all key elements, all the comforting old stuff - checked green table cloths, chunky white china, the wooden bar, even the plants!
The food was also comfortingly familiar - simple, well cooked, one menu choice, or A la Carte (including vegetarian salad! What . . . in the South of France?).
I had vegetable soup, rabbit with prunes and a 'fait maison' creme flan - all delicious and served with a smile, and only a slight increase in price to cover the re-fittments of fresh, calm green paint and the new 'facilities'.
I was sad to see the old restaurant go, but after thirty-two years or so, I think the owners really had had enough of opening six days a week with a couple of weeks off each year . . . I wish the new patrons all the best, and we shall be back - frequently! 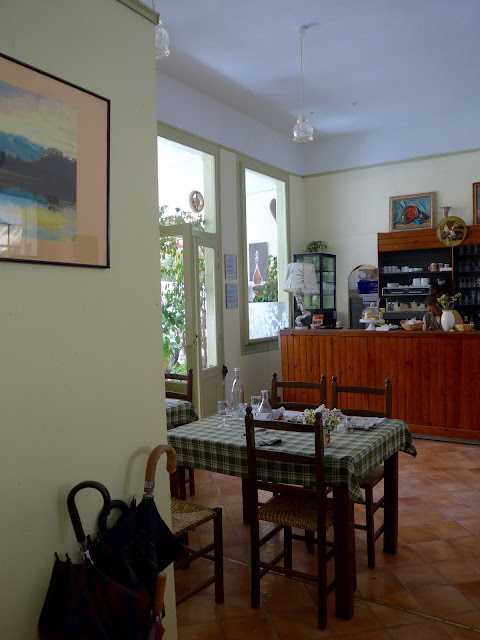 Posted by writing and other stuff at 05:11 2 comments:

Something everyone should see

We watched Mr Moore's latest last night. Although a tad simplistic, (and it would have to be to cover such an immense topic), it was totally engrossing, informative and hilarious viewing.
Moore 'invades' and takes back to his troubled homeland, ideas gleaned from many countries (quite a few of the 'ideas' being originally American propositions!)
Some examples being, Finland's extraordinary education system, Portugal's no policing of drugs policy, Italy's workers' huge amounts of paid holiday and Norway's extraordinarily effective prison systems.
The message we were left with as viewers was, and we probably already knew this but it was great to see it being voiced so eloquently, was that in societies where 'society' is put first and workers are happy in their jobs - enough down-time, respected, paid properly and health care provided, and the 'bosses' take less, put workers and their company as a whole first, it works! Really? Yes!
"It's just common sense," said the Italian owner of a clothes factory.

Posted by writing and other stuff at 00:59 No comments: