I strayed onto the Twitter platform this morning to 'Like' something - and I did genuinely like it, a Tweet from my publisher, Tartarus Press, about their latest book, Fifty Forgotten Books, an interesting tome I will buy for a certain person's Christmas present.

Twitter is a place of intense noise, less tweet, more Tinnitus. I used to add the odd comment but found I was thinking up banalities in order to receive my brain-hit of affirmation and backed away again. I'm sure it has its important uses, politically and informationally but it feels like just another layer of image and sound to be absorbed.

Anyway, as I started to scroll, almost unaware I was doing so, I noticed the image below and was struck by the pure beauty and calmness of the portrayed pile of plant dyed fabrics. After reading a Guardian article yesterday morning about the amount of chemicals, including, clothes dyes found in Raptor livers, noting something as simple as colours made from nettle, acorns and gorse flowers was somehow incredibly reassuring and at the same time overwhelmingly sad. How have we made such a mess of everything in such a short time on this planet?

Thank you to who ever posted the picture - sorry I failed to note the name. I might wander into the realm of plant dyes and incorporate them into my artworks that I will be starting . . . soon. After the building project is finished, see previous post. 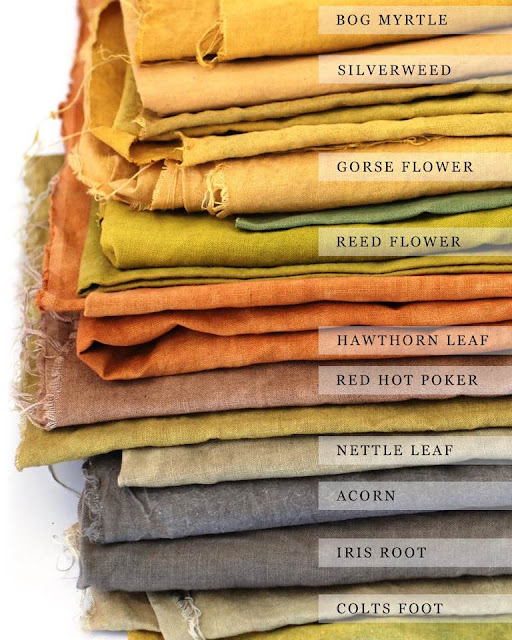 Posted by writing and other stuff at 06:46 No comments:

I think. Maybe 85%, possible 92% depending on how much I peer in depth at our construction site next door. A quick glance in through the doorway - which now has very beautiful attached oak door - thank you Micheal - gives me the impression of, nah, not really too much to do now, where as a more thorough check though and list made . . . and yes there's still a fair bit to do; mostly finishing details, a bit of searching for old light fittings/remaining second hand furniture, filling a lot of holes with lime mortar (chaux) and a couple of things that neither Mark or I can do properly. 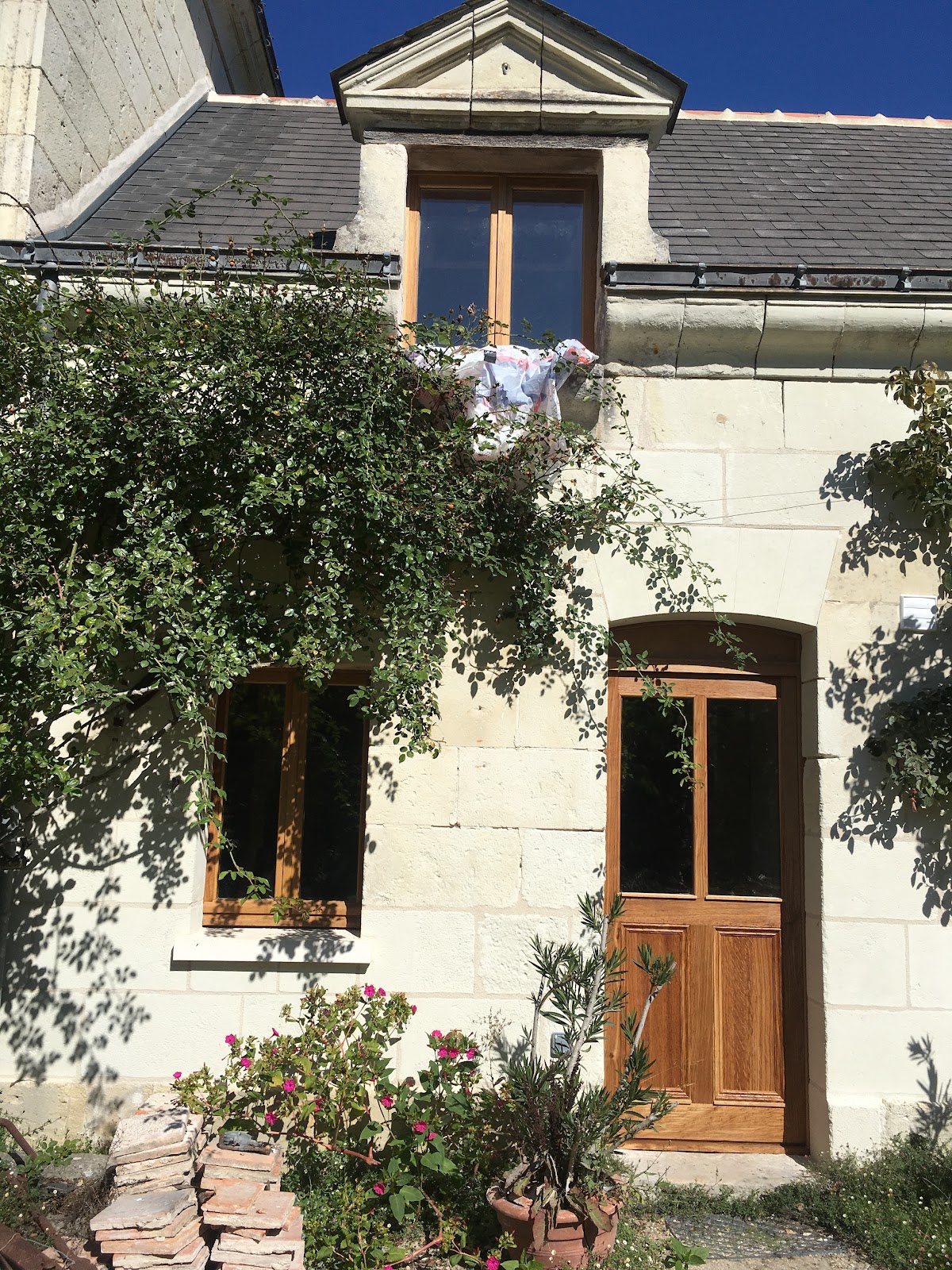 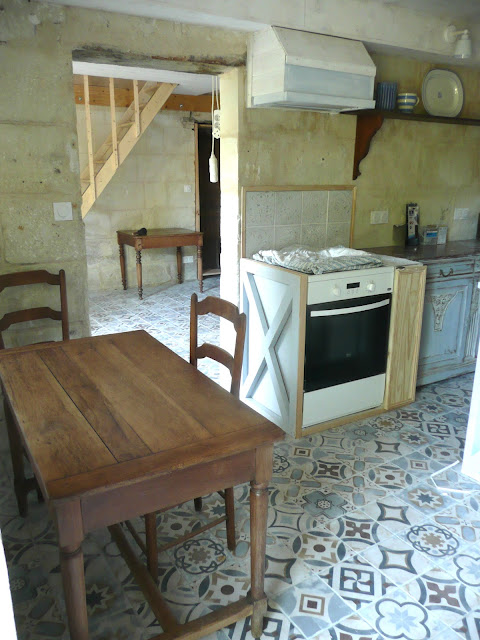 In France, or at least in our area, it seems really difficult to find someone who is a general (and reliable) all rounder DIY-ist, or Bricoleur in French. Every step of the renovating procedure has involved specialists in their own fields: stone mason, electrician, plumber, roofer, etc, and virtually no one who is capable of doing all of it to a certain level. I suppose it avoids mess-ups, and over confidence - 'yep, can do that for you, and the roof? yeah, no probs. I know this great shortcut using cardboard and old tyres.'

But it would be great to find someone just to help with the last few bits - bit of a kick up our collective backsides to get the project finished. 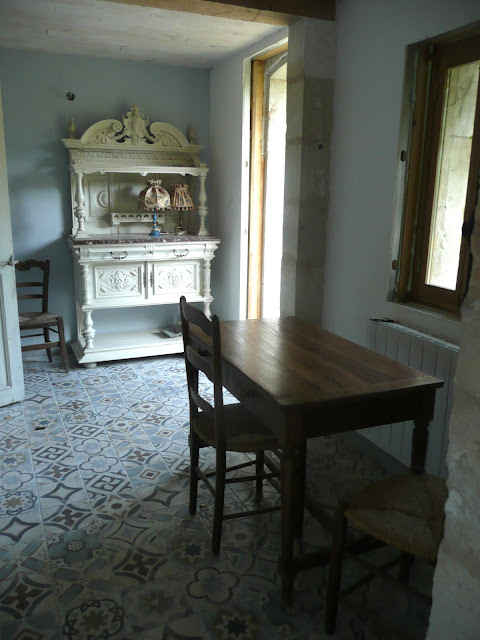 But it will be finished, and when I look back at what we started with, well, we've come quite a long way in a year. 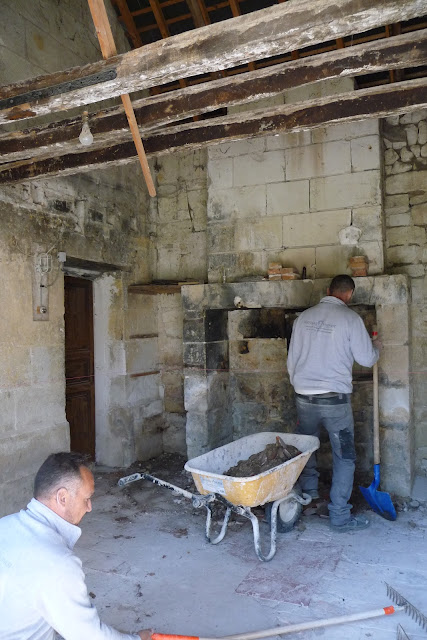 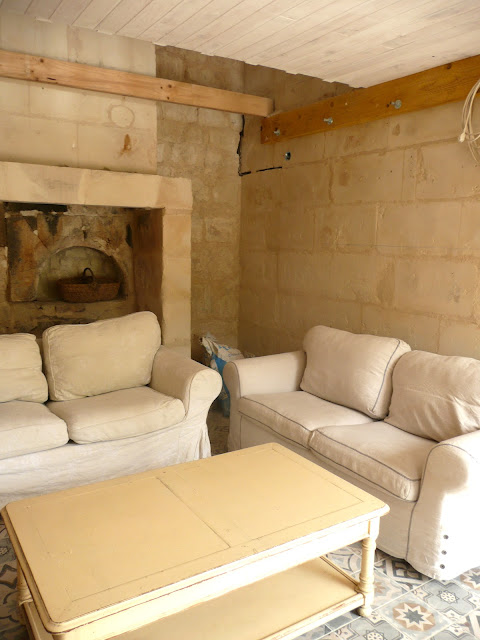 Posted by writing and other stuff at 15:26 No comments:

Yesterday, after visiting our favourite second hand emporium in a search for a chest of drawers and suitable containers for nesting chickens - found the perfect huge oval roasting tin, slightly macabre but I don't suppose they'll notice - we ended up in the fearful planet of Hyper-Leclerc for one item.

A few months back Mark invested in a new razor - one of the few things it's tricky to purchase as a pre-loved item. After dazedly looking at the shelves of testosterone-fulled, heavily marketed, black, aqua and red packaged razors he noticed a quiet and discreet model named Bulldog. No shouting about performance, new twenty blades, the best a man can get, etc; just a straight forward . . . razor with spare blades and a bamboo wood handle.

So, the one item in the supermarket we needed was new blades as our more local planet of stuff doesn't do that one no-fuss brand, yet. Below, the photo of the packaging. Card and ink, that's about it. Imagine if all products could be so simple, and how shopping time could be reduced. No staring blankly at fifty different options encased in layers of shiny, rigid plastic; but then people wouldn't have choice, something we've sadly grown totally accustomed to, at least in countries rich enough to have ad agencies, stuff development teams, supermarkets and willing customers. Perhaps one day, the hand cream product I used to buy as it was in a tin rather than a thick plastic pot might reappear, and people might forget there was once a choice of kitten soft, three layer quilted, spring scented, matching bathroom-coloured loo paper and be content that a paper-wrapped, slightly off-white version exists in their small local shop. 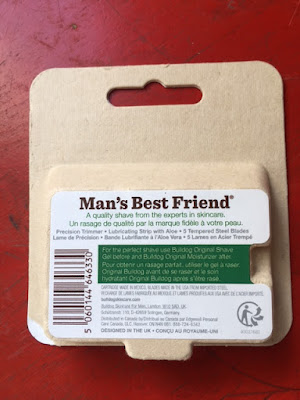 Posted by writing and other stuff at 07:18 No comments:

Local exploration on a Saturday in early autumn

Our son has recently moved into a small house in a previously unknown to us town in an area not renowned for stuff to do. At first glance the town appeared drab, the surrounding area without great interest but during this past weekend we embarked on lengthy wanderings which proved otherwise - nothing that guide books would rave about, except one magnificent small-scale chateau we came across during the small road trip on Sunday.

Saturday was a long meander from the door step, though the town, along a road that follows the railway line, then part of the voie vert a newly constructed bike and walkers path made from a disused line, back along the road, and into the hilly section of the town where we could look across the valley to the house where we started out from.

As ever on these observational walks there was much to note: monumental factory buildings, architectural details, water towers, faded shop signs, characterful passing dogs and front gardens of all categories - gnome-filled, obsessively clean with coloured gravel and little else, overgrown insect paradises . . .

Could be a project . . . s'pose it's been done, possibly many times. 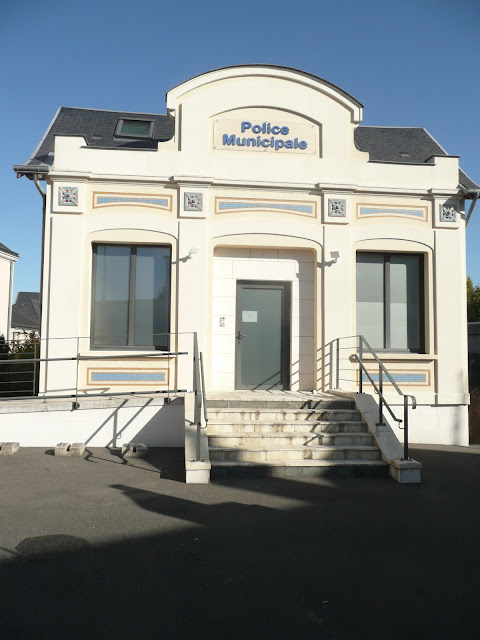 The cutest police headquarters, ever 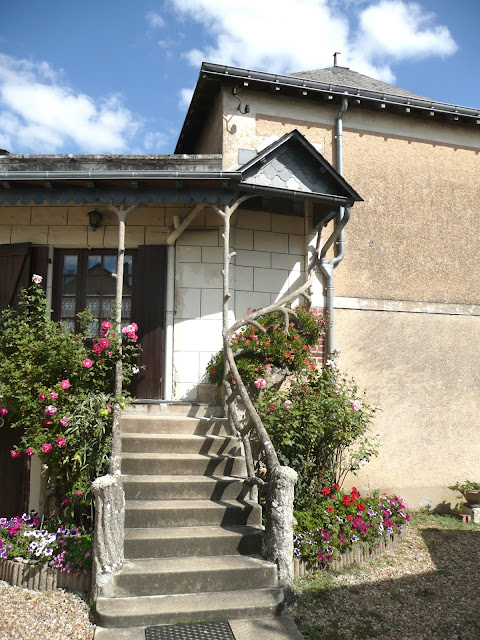 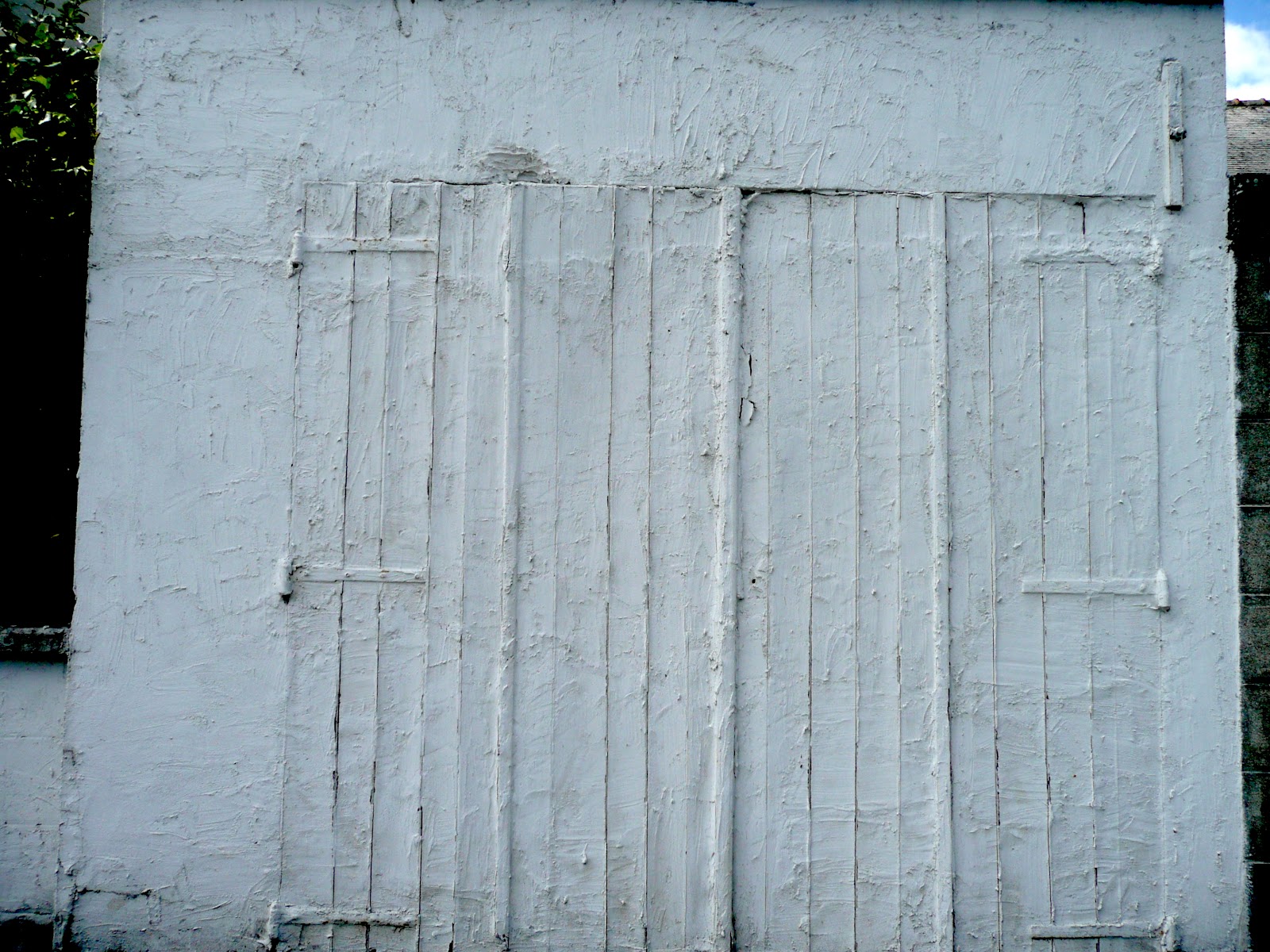 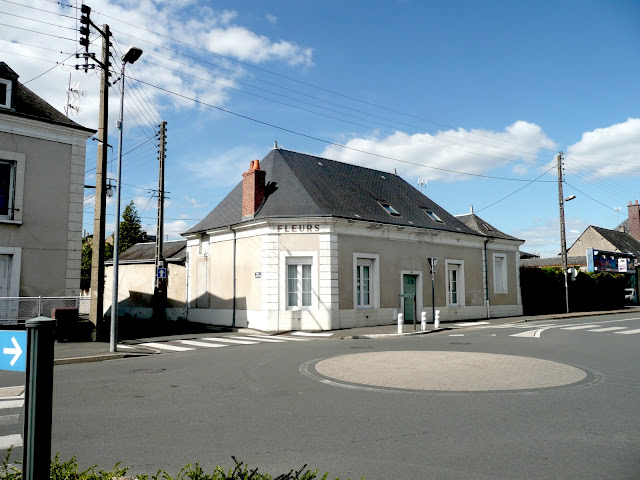 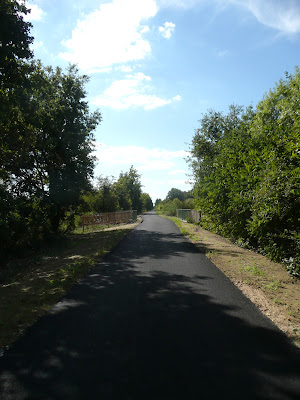 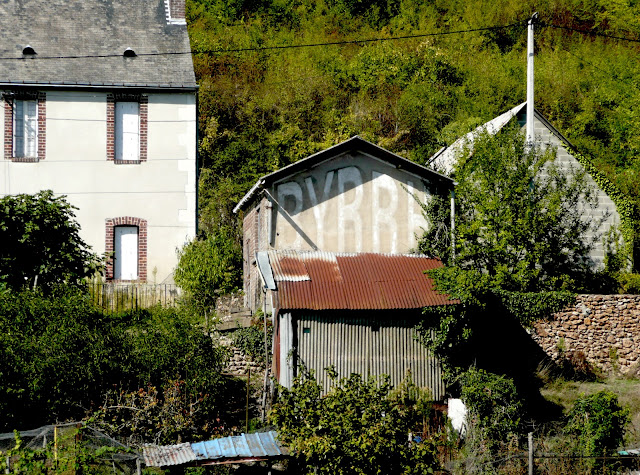 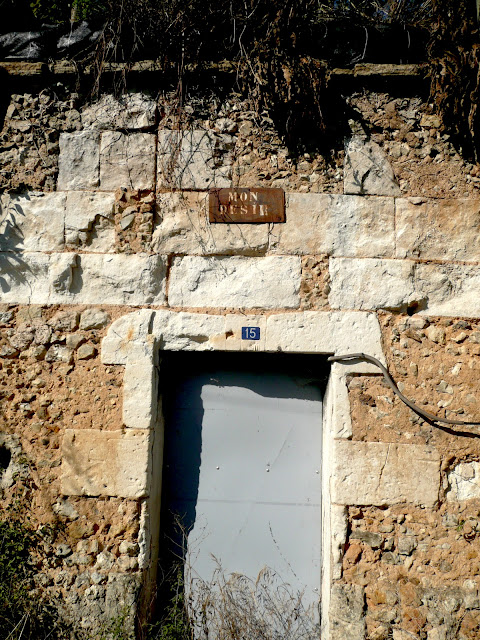 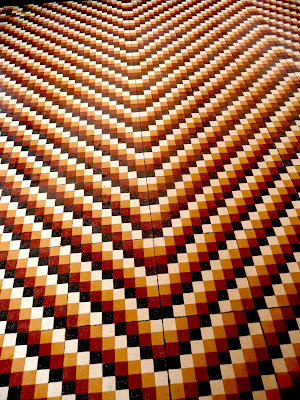 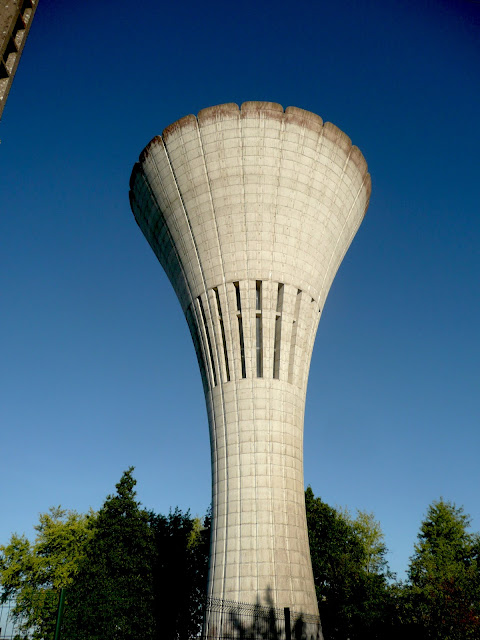 Posted by writing and other stuff at 06:40 No comments:

My mother used to refer to her as Queenie and the same name tag always stuck in my mind, just as she was always there, in the background of our lives as we weren't royalists. I'm still not, and pay small attention to the comings and goings of the UK's most high ranking family. I think I was painting the side of someone's house during the wedding of Charles and Diana, and I recall looking at early hifi equipment in John Lewis with Mum when some other huge royal event during the 70s was taking place.

But as so many others must feel, it is so odd to realise someone who has always been there as much as a parent always is has finally left us. All those angular handbags and matching outfits as bright and striking as Gerbera daisies, all those times I wondered if the Queen craved beans on toast or wished to disguise herself and wander around a car boot sale on a Sunday, all those times I asked myself what it would feel like to hear the announcement that she had passed on. 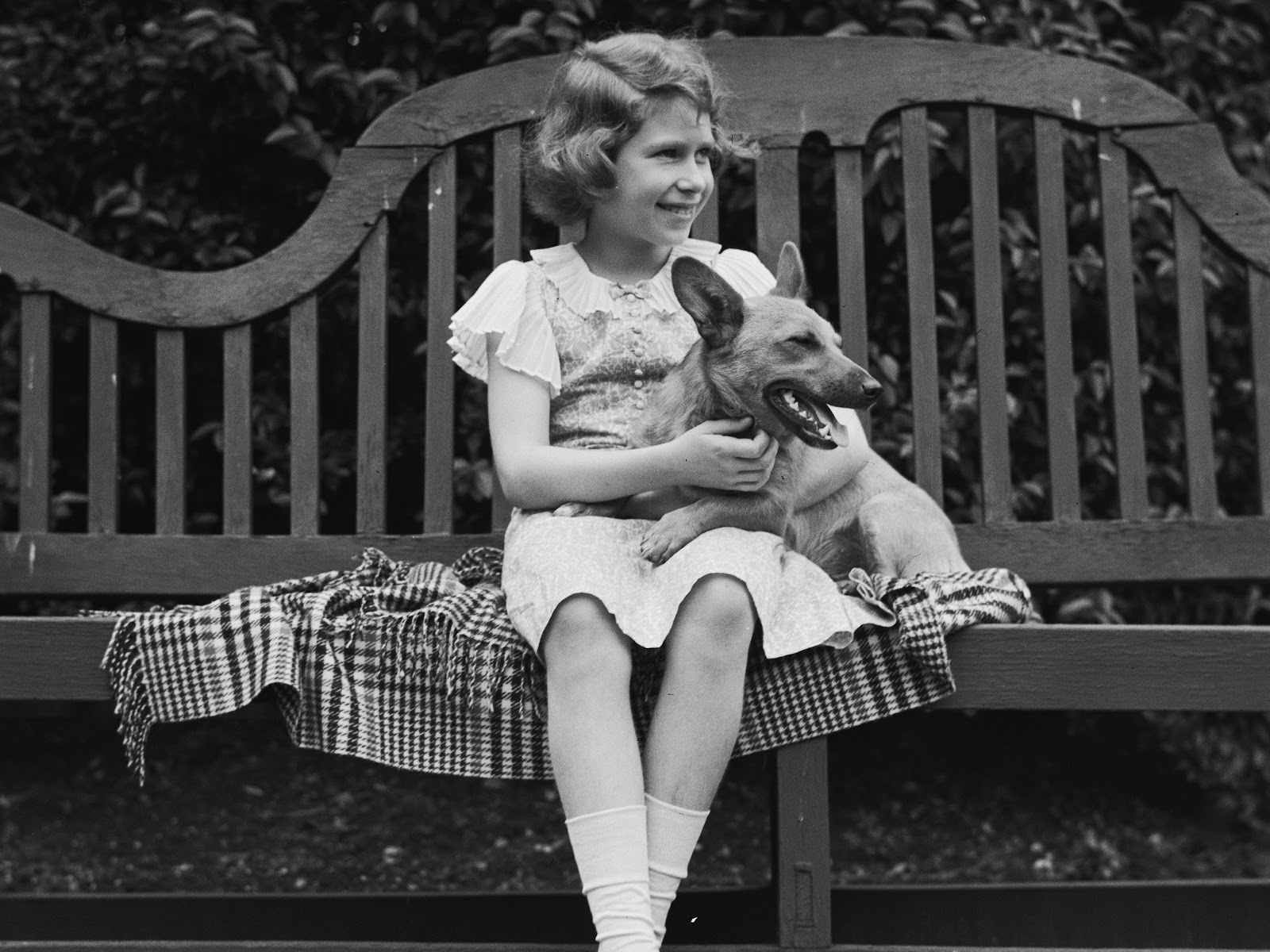 Posted by writing and other stuff at 07:16 No comments:

My genre of writing: dystopian but with hope and humour.

Highly visual portrayals of imagined futures, often set in London, towards the end of this century.

Londonia the first book in the Londonia series was published by Tartarus Press in 2020 just before lockdown - timely for its genre . . .

Smithi, the follow up novel is completed, other companion works finished to good edit standard.

Londonia, that’s where we are. A sprawl of a place surrounding The Cincture - all of it once London town.

Some persons say we’re in the year 2073, others cycle 60 . . . who gives a creepin’ beetle where we are in the history of man. Fukked it up good and proper didn’t we – they, humankind generally.

All I know is I got my shed, my friends and a little bit of an angle on stuff – visions, see inside persons, y’know.

Anyway, ain’t about me so much this book, more about Hoxton and her life.

Within half a clockface I knew she was different . . . not so many damefolk would take over a church after waking on a bench with not so much as a gnat’s knowledge of what happened in their life before that moment. Got it sorted she has: a finder’s life for her – whatever you want: coffee, a shootstick, fresh meat, Zeitporn, snash, gnole . . . her ‘an Jarvis, they’ll find it – for a goodly trade, of course.

All sorted until a jaunt into The Cincture caused her to learn something that opened up a chink into the past; something that started the ultimate finding mission.

Anylane, I’m getting ahead of meself here. Pull up that armchair to the fire, turn this over and start reading. I’ll put the kettle on if the watermec’s been. Jake’s the name – Jake the prophet. 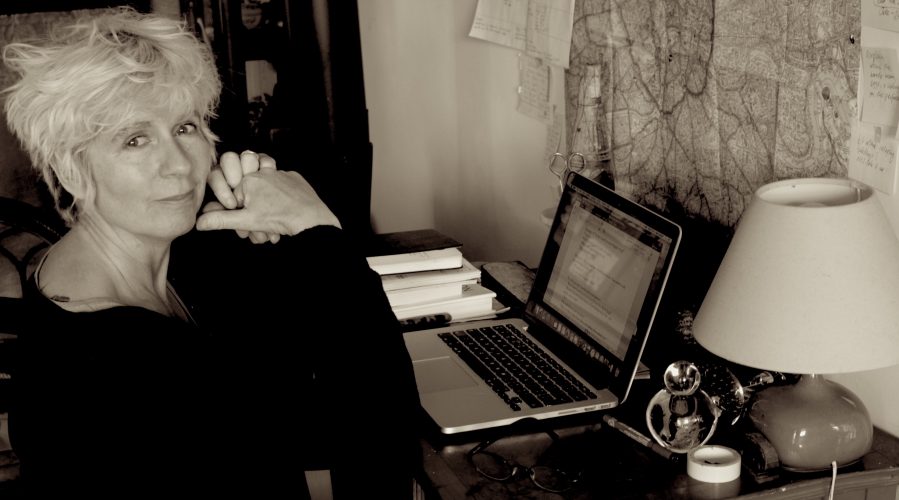 Posted by writing and other stuff at 06:51 No comments:

In praise of our local déchèterie or dump. Actually, it's not our nearest but its worth going there for the employees cheeriness, efficiency and organisational skills. Everything is sorted into as many categories as you could think of from past-it duvets, a whole container just for plaster board offcuts, another for those annoying boingy strips of plastic that surround tile packets and suchlike; paint, windows, kitchen sinks, furniture, etc and with an emphasis on 'if you can use it, take it away' unlike our more local dump where the workers scowl at you for asking if you might rescue something from a container.

Today we unloaded a car's worth of old plasterboard and rubbish from our nearly completed (thank the Lord of all DIY) gite project, and rescued a stack of beautiful blue and white plates which had been left along with a trailer load of perfectly good stuff which could have gone to Emmaus. The main guy had nodded at me as I had walked back to the car with the china. 'Bravo. I don't understand why people drive out here to throw away such stuff.' He had glanced back at the trailer where the china had come from where its owners were busily throwing away a serviceable false Christmas tree complete with baubles, bags of kids books, china and fabrics. 'Yeah, I don't get it."

Added to the perfection of this establishment was their red painted stuffed fox placed in the centre above the recycling bins. 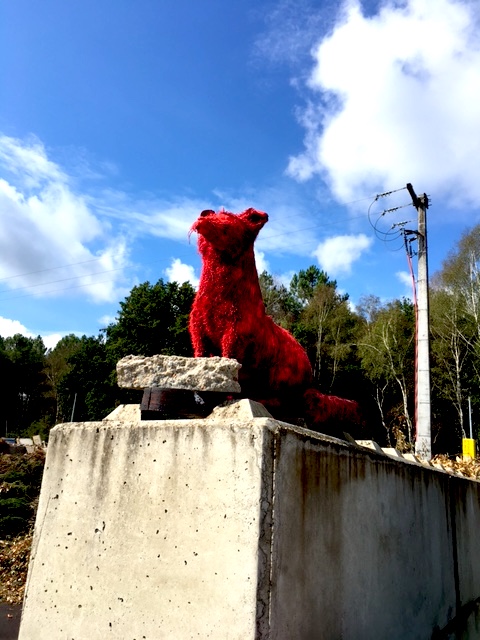 Posted by writing and other stuff at 14:16 No comments: