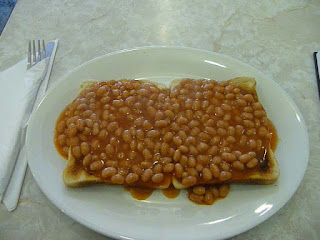 I don't think you can get such a thing here (France).

2 slices, beans and a pint mug of creosote.
An example example. Flabby buttery toast, beans nicely aged for that extra sweet flavour, and neon ketchup.
This was in the Sorento cafe in West Norwood where I had the misfortune to live for several years after college. (Sorry Chris and Emma if you read this). I house-shared with another ex-student who never washed himself or anything, a photographer, my film maker partner at the time and Boz . . .
It was a horrible house: dry rot, a loo that froze in winter and a overgrown garden in which we discovered four bin liners of orange pills which the police removed before anyone had had the chance to try any of them.
Our landlord was the wheezing, Mr Bellamy, who must have been the model for the Leonard Rossiter character in 'rising damp'.
I went back on this sketching trip to see if the area had changed much. Our local pub had become a Tesco's, and the other greasy spoon café had changed hands to a chinese take away. Otherwise the same houses, some familiar shops, the evangelical church still asking 'why are we here' and 'what happens next' on lurid posters.
What happened next was I went 'up west', saw a play starring John Simm, and ate liver and onions in one of the 'Stockpot' cheap and cheerful restos that are dotted around central London.
Posted by writing and other stuff at 07:38 1 comment: 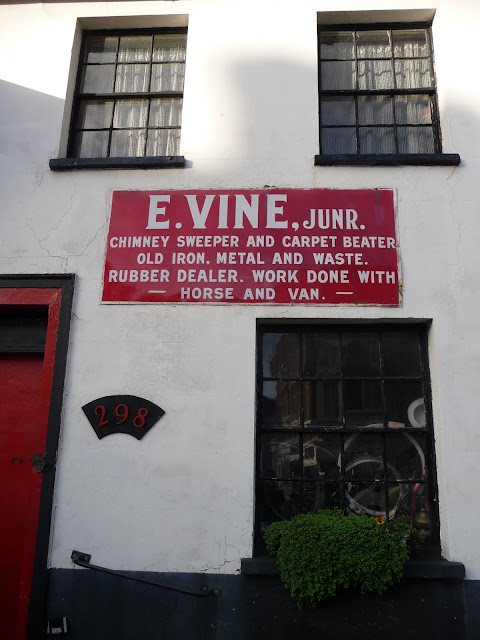 Is that not a wonderful name . . . dead lake. I only know this bit of London because my book agent lives there — recent London memories of catching the train to Mortlake and staggering over to see her with various chunks of book and illustrations.

On my way to visit her this time I saw this excellent house with it black windows and sign.
I might go back and ask what sort of rubber they deal in . . . and what sort of work might be done with horse and van.

Posted by writing and other stuff at 07:23 No comments:

Email ThisBlogThis!Share to TwitterShare to FacebookShare to Pinterest
Labels: horse and van, Mortlake 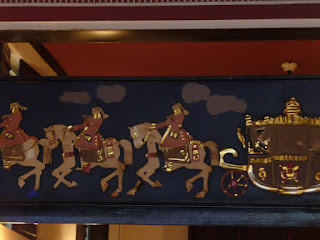 In these times of mass, same-name coffee shop invasion, it was greatly comforting to know that the 'Daquise' still inhabits this corner of London (just near the tube exit) — Polish restaurant awash with possible philosophers, writers and wonderful old birds with clanky jewellery.
It features a soothing and cosy interior with the original paintwork (possibly refreshed since my last visit) and cheery blonde waitresses.
I had the soup of the day rather than the usual beetroot‚ which was startling and delicious - sour vegetable with cream and egg.
Had a chat with one of the afore-mentioned older ladies about life in Paris and South Ken and then caught the next train to Kew.

Posted by writing and other stuff at 11:40 2 comments:

Notes from a dribbly London bus 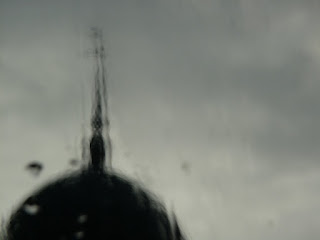 First leg of my London meanderings. Bus from Archway to London bridge.

Excellent overheard phone chat from fellow passengers.
No 1: Man in nasty suit talking loudly into Blackberry type apparatus: "Mm, yes you might hear some noise, I'm in a car" (err . . . you mean bus) going over London Bridge. "Yes, I think we need to bring the product to their attention, the insurance industry has been waiting for something like this" . . . blah blah, etc.
No 2: Well-dressed woman with Prada bag size of Tasmania. "Yes, you could have said it was brunch with a Mexican twist."
In fact, bus was so slow, got off and walked.
Posted by writing and other stuff at 02:02 No comments:

Back from a couple of days in London. Nostalgic meanderings taking in formica cafes (mercifully saved from becoming Starbucks) train lines, and pavements that I trod over for many a year.

Here is a small film of a kipper smoking house in Clapham junction.
Posted by writing and other stuff at 12:13 No comments: 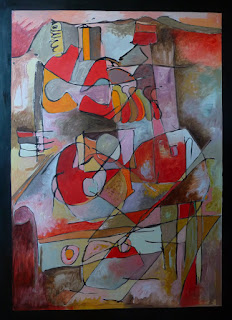 Somewhere between Carcassonne and Narbonne, with a hint of crepie and graffiti.
Posted by writing and other stuff at 07:11 2 comments: 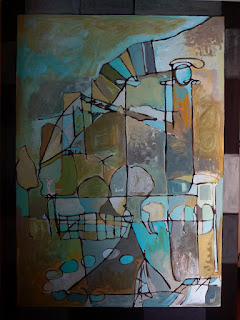 Another in my train window series.
Posted by writing and other stuff at 07:09 No comments: