Slowly . . . our gite project is gradually taking form; upper wooden floor in place, most of the wall joints done, rails attached for the plaster board and now the ground floor tiling. I can now see why people favour huge tiles, which personally I don't like much, but, bit of adhesive stuff, place the tile and about the tenth of the floor is done. After this, we'll attempt to assemble the staircase, the windows should arrive (orders are massively delayed in France, as probably elsewhere), then just throw the plaster board up, (yeah, right), make a small kitchen and bathroom and wait for guests to turn up. Probably not. I suspect this will take most of the rest of the year and we'll miss the season, but who knows it might all come together quicker than expected.

Right, off for a bath to soak my protesting joints... 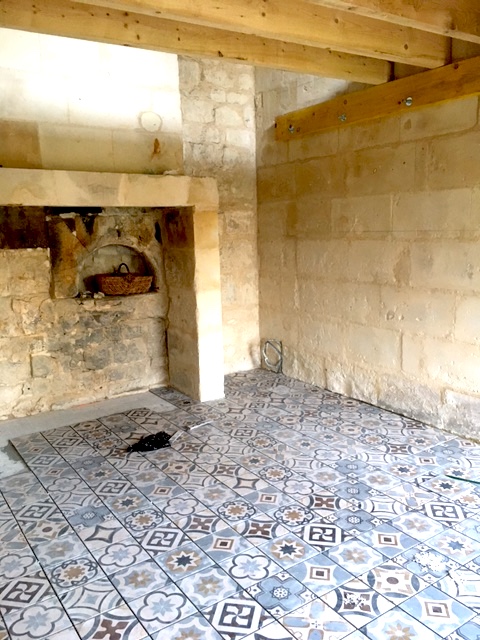 Posted by writing and other stuff at 20:54 No comments:

While in our favourite emporium, Emmaus,( charitable, recycling and work-creating place) a few days ago and happened to note in the linens area the bed cover featured below. I didn't need it but felt compelled to buy it just to marvel, probably forever, at the painstaking creativity and patience involved in such a thing. I imagine it was probably made for a new homestead, a creation to adorn the marital double bed. Perhaps the wife to be had spent weeks, possibly months crochet hook in hand by oil lamp light every evening after the days jobs had been completed, or perhaps her mother did, or all the women of the family had taken part, making the little triangles to be sewn together.

So, for twelve euros, an amount I could have spent on a pair of cheap supermarket pillowcases we now have the cover adorning our bed, not a stitch missing, not a pulled thread of its blanc cassé heavy cotton makeup. Amazing that it has survived perhaps a hundred years or so without so much as a tea stain spoiling its uniform colour. 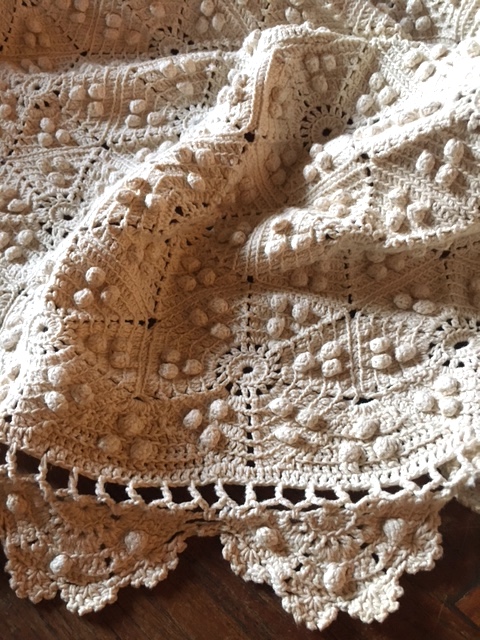 Posted by writing and other stuff at 20:56 No comments:

Or rather, 'beh . . . ça va aller' which is what our roofer said when he came round to examine a few rather manky beams in our outbuilding's (future gite) roof structure. I suppose I was expecting a bit of tut-tutting and sucking in of teeth, and had been preparing myself for some fearful quote but as most French builders or certainly in this region seem to react, it was nothing to get heated about. Great! brush some vile anti-everything product on it, maybe shove a bit of stone or oak under the most dishevelled bits and Jean-Michel's yer uncle.

So I did, standing on an overly long ladder, stones and in hand, and stone mason tools at the ready to rebuild that part of the wall which had mostly crumbled away after a leak at some point before the roof was redone in the late 80s.

I like doing this. After Ezra's stone maison (tailler de pierres) friend came to stay for a week to work with us we gained a fair bit of knowledge, and lost the fear of pulling rocks and mortar apart to redo damaged sections of the gite's walls. It's incredibly satisfying to scrape away the loose mud and mortar and figure out which stones should go where. I now have a vague idea of how the dry stone walls of Derbyshire and Yorkshire were constructed.

The irregular stones are all done, just all the upstairs more regular rectangular 'tuffeau' blocks to clean, and redo the joints - pointing, I think, in English. Then a massive sweep and clear up of rock dust, sand and bird droppings from our lodger sparrows who congregate each evening to roost in the rafters. Not for too much longer. We may have to build them a separate bird house... 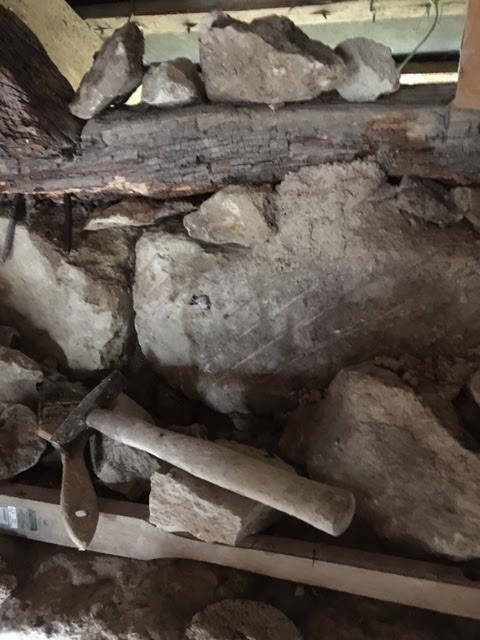 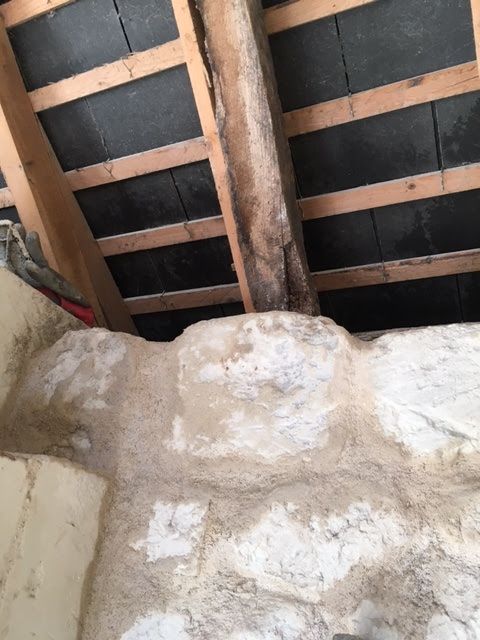 Posted by writing and other stuff at 20:49 No comments: