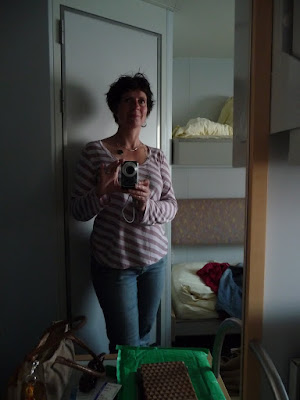 Good journey through France, gradual changing foliage, appearance of sheep in place of vines, stayed awake by listening to Oliver Twist and Dracula - an odd contrast with sun and springtime but it seemed to work.
Few intense days of clearing a million items from Mark's mothers house. Compared the UK tips to the French ones, and gave more stuff to Oxfam than they knew what to do with.
Oddly enough they weren't going to let us into the tip as we didn't have a van permit but one of the employees came over and started asking about rugby and then Blanquette de Limoux. He was from Tours, but had lived near Liverpool for 37 years, and obviously thought we deserved a break. Merci mon brave!
Following, was an enforced trip to Ikea to collect Ezra from his aunt in law; escaped with only one rather dandy cushion and a washing up brush. Nothing like clearing four van loads of unwanted stuff from a house to make you realize that you really don't need that rather funky unusual table lamp (oops, don't forget 58,000 people on the planet have the same one).
Homeward bound. M6 nightmare, closed lanes and near misses with tired lorry drivers.
30 miles from my Godmothers for night stopover, Mark swore; a rare event — could only signify end of the world. At that point it seemed like it. He had booked the return date for a week later. Drove in black silence thinking about volcanic ash cloud-mass transport panic, van hire companies reaction, our lovely house sitter, dogs, etc.
Phew. New ticket, and few hours later were on slow return ferry.
Dead calm, great; no lying on anything horizontal for hours, even managed to eat late lunch. A big mistake. Four hours later I started to feel nasty. Delayed psychological sea sickness? Worry about where we were going to put the van load of stuff we seemed to have acquired? No, roti de agneau (roast lamb) farcied with lively bacteria.
Horrible journey down France, swerving to halt in Starsky and Hutch style to verge to throw up every half an hour. Stopped at Tours and checked into an auto hotel so I could vomit in comfort. Actually amazingly well designed and smart place 'B and B hotel'. A change from weird old rambling places with 1930's plumbing that we would normally opt for.
Arrived in Limoux next day at 6.00pm: sun, people in shorts, the square full of people lounging in baggy holiday fashion, and back at home, rampant spring garden. Onward and forward with our own house purge. Vide grenier, Pauligne this Sunday!


Picture of me proving that I can stand up on a ferry.
Posted by writing and other stuff at 22:59 3 comments: 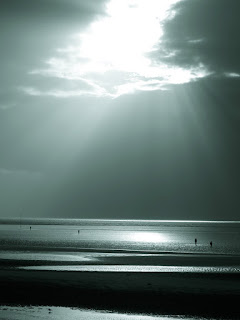 Beach at Formby.
Posted by writing and other stuff at 01:11 2 comments: 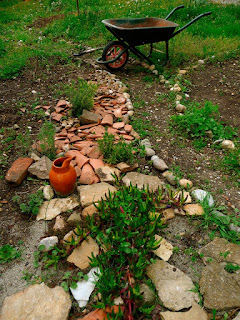 As I was saying, before I forgot to say it...organic gardening. In the sense of no chemicals, but also in the sense of, I don't know what I'm doing but I'll add a bit of that and see what happens.
For me gardening is becoming more like painting, and playing like when we was kids, a few stones here, some broken roof tiles, some pine needle mulch in this section, etc. I used to get a sense of panic in spring, trying to do the whole piece of land is impossible, the weeds are much quicker than me, so I'm just doing sections each year. This is a area under construction of mostly mediterranean plants, some of which finally snuffed it after the last snow blanket.
If there are fellow gardeners out there feeling overawed by the green invasion go and look at the Jardin bouichere in Limoux. Run by two lovely folks, it is a paradise of plantage, and was once, when they bought it, a rubbly field with one tree.
Posted by writing and other stuff at 08:06 No comments: 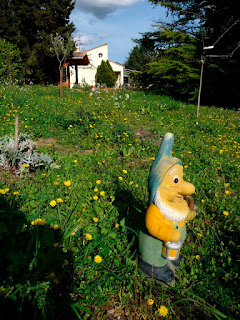 There is a saying that most of us British folk are aware of - with regard to the long red metal structure afore mentioned in the title of this post.
' . . . is like painting the forth bridge; you finish one end of the job and then start again at the beginning. I don't know what one might say in French. ' . . . is like making a planning application for a shed, or, like trying to cancel your car insurance. If anyone knows I'd be interested.
The reason for this observation was inspired by the green stealth in the garden. Tiny micro-dots of seedlings are suddenly ten centimeter plants, overnight; sucking everything out of the soil and shooting skywards.
I run around like a demented hamster, unearthing handfuls of lush weedage, filling the wheelbarrow and emptying it onto the Mount Fuji of weeds, only to turn and see the green vastness encroaching upon me . . .
We of the hothouse are organic (mad) in our gardening pursuits, and it is heartening after three years of no chemicals that amongst all the usual suspects in the weed world there are treasures appearing: grape hyacinths, edible herbs including coriander! violets and lots of other unknown-to-me plants - until I re-discover the Flora Of The Midi book we have somewhere.
Maybe next year we will start workshops: weed appreciation for begonia obsessives, one hundred things to with dried weeds, weed counting as a way into meditation.
Anyway, this year I will make beds of tame stuff and areas of weed freedom just to see what else appears that we can marvel over and possibly eat.
Posted by writing and other stuff at 11:18 1 comment:

Email ThisBlogThis!Share to TwitterShare to FacebookShare to Pinterest
Labels: Forth bridge, hamsters, weeds 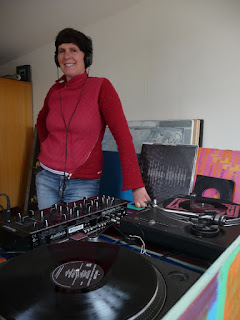 I think I am learning to 'precis' down a little as life moves on chugging away like one of those fat little tug boats on the Thames. Or, occasionally a sleek white motor vessel at St Tropez, and at its not so good moments, a small badly-painted dingy, half submerged in a tidal stream near Skegness.
There is something very satisfying in working out which projects are really the important ones, shedding the try-outs, the ones that are lurking in the brain's cellar. These need to go to the tip.
The DJ one was good for a while, then I became a bit . . . old. Not in a 'cool' sense; there are lots of old hairy DJ's out there spinning with hyper-coolness, but old as in my ears started ringing alarmingly, and it would take two days to recover after a wedding do.
The last one we did finished at 3am; the very inebriated bride fell over and broke her arm, and the groom asked us to carry on while they went to casualty in Carcassonne.
So, anyway, with some great memories of parties, and the satisfaction that I can 'beat match' pretty well now, I hang up the headphones. Some guy is supposed to be buying the stuff but he seems to have gone a bit wobbly due to the exchange rate . . . SO, if anyone wants to become the local DJ, mail me a letter, roll over Beethoven.
Posted by writing and other stuff at 22:46 1 comment: 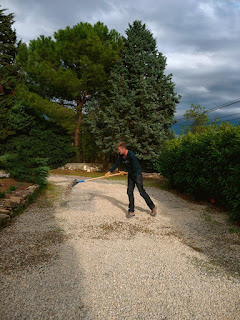 Someone once described Mark as a polymath; in the words of a certain Spandau Ballet track, 'I know this much is true'.
This morning he excelled himself. Flitting elegantly from project to project it was a wonder to watch.
Jam tart making, after constructing his own (very rustic) pastry, mixing hallucinogenic sounds in his recording room, shovelling gravel in the drive and piecing together French text for the Hothouse Bed and Breakfast site.
Meanwhile in his head, many other projects are no doubt budding. Hazarding a guess I would say: how to find the money to buy a new mega-super electric piano he has been salivating about.
I love the way Mark introduces the subject of new music equipment. It sort of sidles up, all quiet and innocent in a nice new jumper with its hair combed. 'Its really amazing what this new piano can do — the recordings are just like a Steinway! It would mean we could' . . . etc etc .
I suppose I'm pretty similar; on with the next idea . . . see next post — end of DJ project.
Posted by writing and other stuff at 02:48 No comments: