Sadly not able to post much at the moment, or continue writing my latest novel due to a tedious neuralgic problem in my neck and face . . . boring.
See you soon, hopefully.


Posted by writing and other stuff at 05:43 No comments:

It's a week since the lad departed for art college and I am now able to go into his room or find an odd sock of his under the sofa and not feel sentimental - too much anyway.
The first few days were not unlike being dumped after love has gone astray, and I don't mean that in a weird way! But after listening to a Ted Talk about love and the brain, it does make sense. The     'hippocampus' (still can only see a large grey lumbering mammal wandering around a university grounds on seeing this word) deals with all this emotion stuff and when the love object is removed the 'hippo' part of the brain increases the desire and longing to see them constantly. Of course the difference is that he still seems to like us, will return home and we will, hopefully, slot back into all the stuff we usually do as a family, rather than the 'being discarded by a lover' situation - unlikely to ever see them again apart from odd furtive glances behind the cheese section in the supermarket if you are still live in the vicinity of each other.
So what have we learned and discovered?
I still like Mark (husband) a lot (phew) and he, me. Good. The bathroom stays clean. I am becoming aware that there is actually more time available, in fact several friends after listening to my pathetic sighing about absence of lad said 'Freedom!' and, 'just give it a couple of weeks and you'll be VERY happy with just you two'.
I don't know, but I think about him a lot, wonder what he might be doing at various parts of the day. But then I do that a lot about family and friends anyway - I wonder what Katherine might be doing now, or Mark, or Rosemary, or Penny, or Jo, or you, dear reader. Are you sitting with laptop, cup of tea and pile of things you should be doing nearby?
Fascinating that, isn't it . . . imagining everyone you know engaged in all these different things we all do all the time: eating, walking, driving, thinking, queuing . . . but then if we were telepathic, we'd all know what we were all doing all of the time. Social media would be even more exhausting.
My current novel, at the moment called Brassica, features a clan of people from some future Earth time who are telepathic, have more or less forgotten how to speak but are having to converse with my main character, 'Hamish', who has arrived from 1992.
How did I get onto this. Anyway, the point being, my brain is no longer solely occupied with 'is the lad okay, or not'. Onward. The Hippocampus, which is actually Greek for Seahorse, not large grey, university-haunting mammal
Posted by writing and other stuff at 06:56 No comments:

'Funny thing, life' . . . a phrase Mark and I say to each other at least three times a year when considering an landmark event/family issue or general 'what is it all about' moment when looking at stars, etc, etc.
These last few days have been the most 'funny thing, life' bit of time I can recall. Son is now installed in his tiny but welcoming flat in Bordeaux and everything for all of us has changed. That last half an hour before we went our own ways - me to drive back, him to walk to art school - was as distinct and hyper-memorable as the half an hour driving to Birmingham maternity hospital knowing he was going to appear and everything would be different.
The moments ticked away while he played guitar and glanced out the window for his friend to turn the corner into the street, and I fussed about in the kitchenette like a distracted mother hen - a last bit of checking if he knew where the tea-towels were, and, 'don't forget to eat lentils', 'floss your teeth' 'clean the shower' . . .
9.00 a.m came. We hugged. We left the flat: he to walk with friend to the school and me to sit in the car, part wondering if we had turned the ring off on the stove, part in shock at the fact that 'this was it'. As if ordered, the day was about as dreary and melancholic as could be. A grey drizzle flecked the car windscreen, water gathered and dribbled down the glass as I stared out at the street, uncomprehendingly. No tears, just a sort of shut-down feeling - the end of a nearly twenty year period of everything from changing nappies to packing his stuff away in his room. Bollocks, of course. I know it's not the end of anything, just a change, a readjustment, a different arrangement of our family arrangements. That's what I told myself as I drove off the wrong way and got totally lost in the outskirts of Bordeaux. 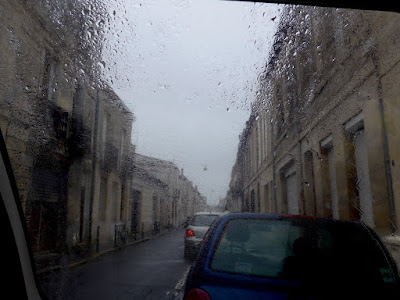 The drive back was not too bad - one or two friends said they howled a large portion of the way home. I took a different route from the motorway, visited a place we (son and I) had stayed in a few years ago. The same old café was there with same old dame cooking and serving. I ate an excellent 'pot au feu', wrote to the lad reminding him again of flossing, lentils, etc; had a stroll around and drove homewards.
This was the bit where it really struck me. On walking into the house (husband out) everything seemed exactly as usual, except it was all exactly un-normal with this massive portion of us missing. Yes, I did weep, hugged dogs and made tea, and when Mark returned it became gradually less tragic.

The next day, lovely friends visited who had all experienced the same 'deconstruction' of the domestic everyday and assured me it would become easier, indeed easy within a couple of weeks or so.
I know they are right, and two days on, it is a little better - with jolts of sudden sadness overlying the general slight melancholia. I've re-done the bureau walls, hung new pictures of us all, and will, at some point, tidy up his room. I had shut the door on it as I see the interior on going to the bathroom, but I've opened it again so that it's still totally part of the house - drum kit, abandoned socks, books that he'd decided to leave.
So, what don't I miss? slight arguments over the use of the general computer, bit of fussing over some  foodstuffs - 'but, I don't like onion', and . . . yes, I miss everything else.
My iphone, eighty percent ignored up until now has suddenly taken on new mega-importance: sending texts, odd pics of the dogs, and a mobile possibility of a quick bit of communication at any point in the day if we are needed. Now I understand the importance of that phone call back to my mother from my own art school days. Standing in a freezing corridor waiting for the call box was perhaps a tedious way to spend twenty minutes but to her . . . no mobile phone, no texts, just hoping for a call to reassure, or a letter describing the week. 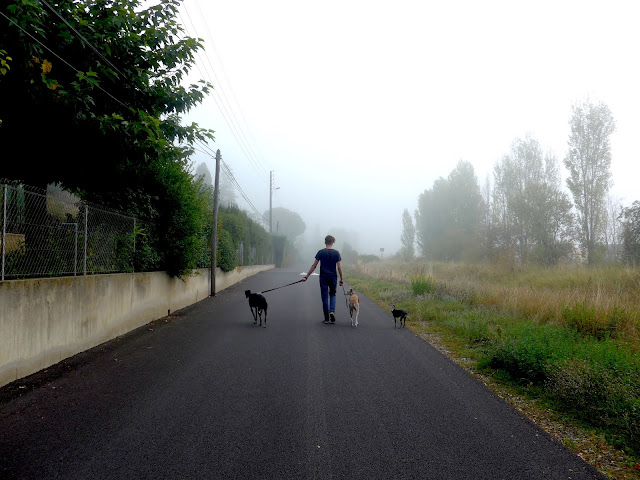 Last dog walk for a little while
Posted by writing and other stuff at 10:53 No comments: