Normally I might be scouring the countryside for a bit of holly and mistletoe . . . this year as the garden seems to be putting forth a new batch of red roses (?!) we'll have them instead.
Climate warming . . . it's just an untruth, Mr Trump, isn't it? 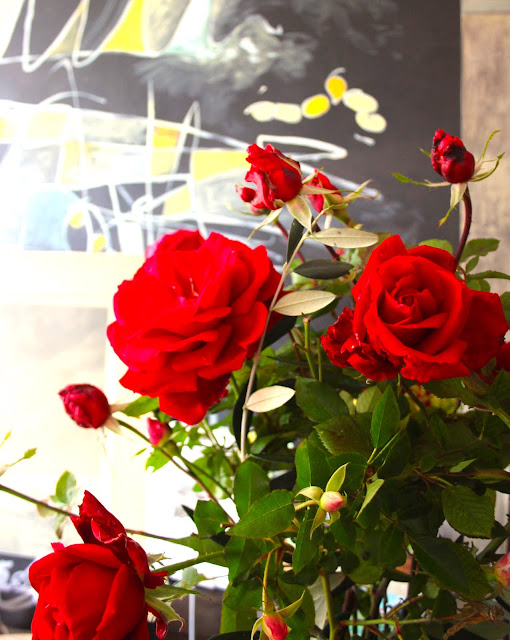 Posted by writing and other stuff at 07:40 No comments:

Thanks mainly to our super Workaway, Chris, the HotHouse garden has been shorn to almost tidy. This year we finally bought a chainsaw - after many years of looking at them in DIY places and deciding they were far too scary. It's been used every day for about two weeks and has thus well and truly been a GOOD BUY.
I saved the bonfire lighting for the winter solstice night. We didn't dance around it or sing but just watched the hissing flames ride high into the inky sky.
It feels a little cheaty this year as we've only had one very slight frost and daytime temperatures of  early autumn. Roses are making a come-back and the artichokes are still in full leafage. A few misguided birds have started singing hopefully in the early mornings and the pear tree has put forth a few tentative clumps of blossom. Still, one always forgets what January, February and March can come up with . . . 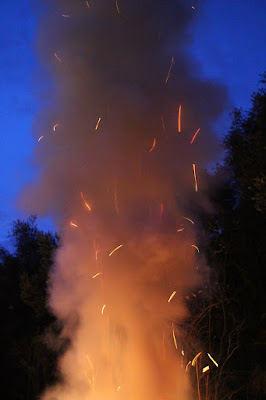 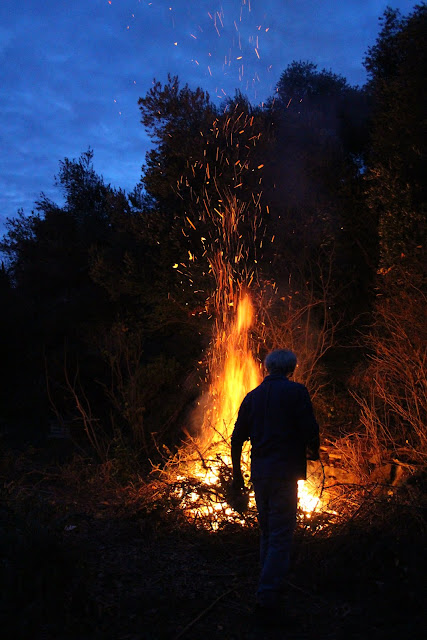 Posted by writing and other stuff at 09:47 No comments: 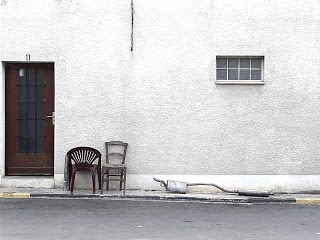 Meanwhile, in a  small overlooked Southern French village, two innocent chairs are about to fall victim to exhaust-pipe attack.
Posted by writing and other stuff at 11:48 No comments: 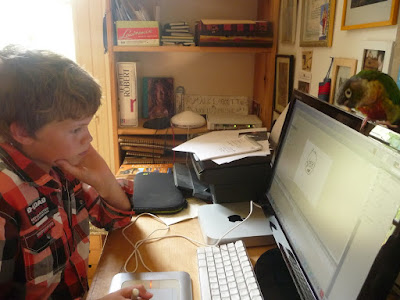 Oh. I'm in the process of going back over all old posts and amending the appalling spelling/grammar, etc, as I want to make a blog-book. This post was from about nine years ago and has time-travelled to the 14th of December 2018. I don't know how to move it back so, this bit of history will stay here.
-------------------

For the boy person, or maybe not really boy anymore, there have been major changes over the summer and he has grown up a lot. Walking to college he now keeps the obligitory distance from his mother as we approach the place; saying 'Its time for snugs (bedtime) is well out of the question and nick-names. Nope.

Note the parrot on computer.
Posted by writing and other stuff at 02:20 No comments:

Me at eighteen - or so 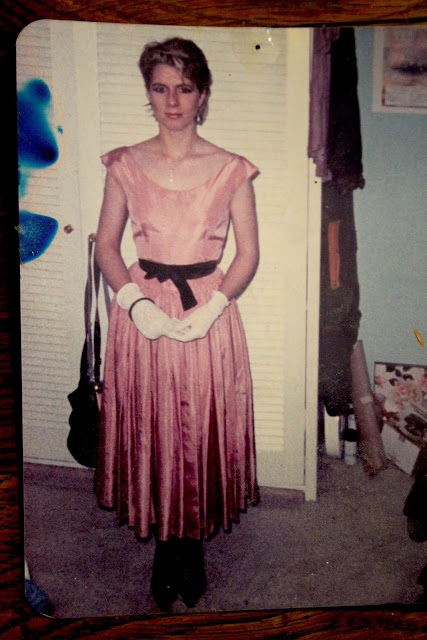 I remember the dress; it had come from a jumble sale a few weeks before and was being worn for the first time for the wedding of my boyfriend's sister (I think). Odd, but I can recall nothing at all of the day, just the getting ready to go and wondering vaguely what it would be like to marry Andrew and inherit his family.
A few months later, I'd gone on to art college and they'd sailed for Australia so the vague wonderings never became more than that . . . Probably a good thing.
I googled him once, just out of curiosity to see where he's ended up in life, in fact, I've just opened up another page and had a look again, and  . . . think I found him. CEO of some wealth management fund. Wow. Somewhat different direction from an art foundation course in Bournemouth, if it is him. I would swear it was his nose - rather a fine example of one, but the rest, hmm . . .
Some people look almost the same as I recall them from at art college - friend Ray, for example, give him a 1980s shaggy wig and yep - same person.
If we could time-travel . . . to slip into my eighteen-year old skin for a day and recall what the day was actually like.
In fact, that's the subject of my latest 'work in progress', a novel called (at the moment, anyway) The Panto-horse end. The story of a woman who meets her demise while filling in for someone as the back end of a pants horse. After arriving in 'Pendingville' she is invited to visit various stages of her life, to reflect on her mistakes before possibly going on to Heaven, back to Earth - but not necessarily as herself - or to another place called Perpetuania.

Welcome. Please read the following to insure your passage into Heaven will be as trouble free as possible. Fill in all blank spaces, sign and date. You will be assigned a guidance officer during your initial briefing.

“Why am I not actually in Heaven?” asked Marion, as she allowed the surreal words to imbed themselves in her mind, pushing out the hospital idea.
“You have certain issues that need to be addressed,” said the doctor as she stood up and crossed the room. “Also. There are other factors which need explanation.”
Reaching up, she grasped a toggle and pulled; a rolled-up chart rattled into place.
“Right,” she continued, tapping the poster with a biro. “Here, is Earthly life,” she traced the pen up to the top. “Heaven . . . and down here, Hell.” The pen moved opposite Earthly life. “And here . . . Purgatory, or Pendingville as we renamed it. The Boss thought it needed to be a little less . . . Gothic. Of course, there are other destinations but we’ll explain about that later.”
“How long will I have to be here?” asked Marion, wincing as her back started to complain at the unusual angle.
“After my brief look at your details, I would say about six Earthly months.”
Marion’s hazy mind cleared. “Six months! But what about doing the house up? The kitchen’s about to be refurbished.”
The woman put up a hand to stop the anxious flow.
“Mrs Smith. You are at stage one – acceptance of the fact that you are in fact, dead. Your kitchen is no longer of any importance.”


Posted by writing and other stuff at 22:05 No comments:

If sun-loungers could talk 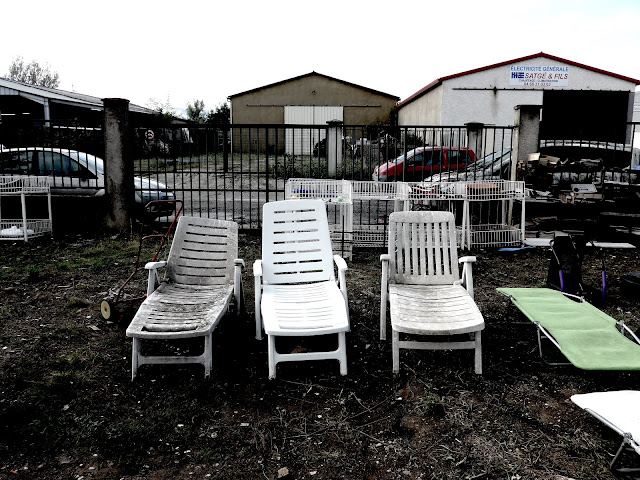 Left: "Bollock's innit. Y' sit out there - rain, sun, blizzards 'n shit, puttin' up viv all shapes and sizes then soon as y' get a bit manky, that's it. Bastards. Could 'ave repaired me back leg - bit 'a gaffer tape, a hose-down, job's a good'n."

Middle: "Oh, I don't know . . . one can get a little tired of the pool-crowd - continually being splashed with Prosecco and Ambre Solaire, and, quite honestly, I could have done with occasionally being left to get a tad manky. Bleach does such appalling things to one's epidermis."


Posted by writing and other stuff at 05:46 No comments: