So, the 'boy' is off at the end of this week - boy being son, Ezra, now nineteen and about to commence his five years of Fine Arts training.
'But what happens at the end of all that?' he asked me recently. 'Who knows?' I'd replied, usefully, being one of two parents who have never put 'getting a good job' as a top priority after any education phase.
A, there are few 'good jobs' to be had these days, even if you have a first in whatever you had studied - plenty of bods with doctorates wandering about C.V in hand, and B, few people really know at that age what they really want to do, especially artists.
Actually, I didn't just say, 'Who knows'; I said lot's of encouraging things about life lessons, artists being creative and free thinkers, craftspeople, problem solvers, innovators, and all the best rock bands have emerged from art school - an exciting possibility for Ezra as he is rapidly turning into a multi-instrumentalist.
These last few days have been emotionally charged - for me mostly - as we sift through his belongings and decide what should be taken and what should remain at the Mother Ship. How crap of nature to provide women with the menopause as their offspring are about to jump the nest. I only have to look at a pair of his socks and tears threaten to emerge.
It's all good: he's going to a wonderful city, not too far away, but far away enough; the college is everything we had hoped for; and it's time - time for him to look after himself, budget for food, learn that clean underwear doesn't miraculously appear in a drawer . . . It's all good and my intellectual (?) rational side knows this but it doesn't stop the emotional and sentimental side sidling over and prodding me every now and again: 'remember when he made that?' 'Oh, look his first jumper' . . . 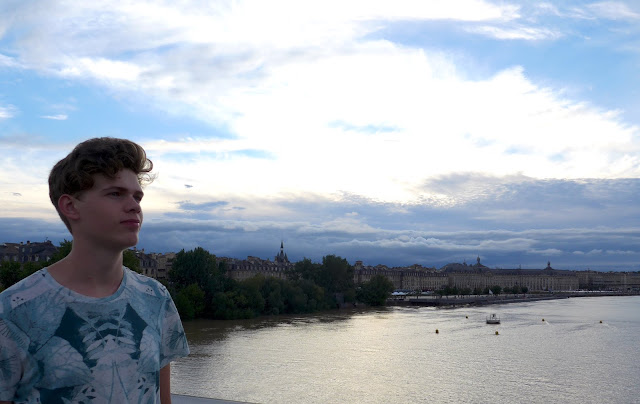 Odd how one static image can bring back everything to you in a sensual deluge.
We're all so used to firing off rounds of digital images, most to be discarded on a dusty corner of the computer somewhere, but occasionally there are one or two that completely capture a particular moment.
When I look at this picture - taken in Bordeaux on a searingly hot day in August - everything streams back to me: traffic noise, laughter from people standing in the 'mist fountains' near the river, scents of summer-weary vegetation, the heat rising from the crossing I was walking on, and that strange extra jolt of happiness of a moment in time - me with camera, two guys in a vintage Renault with a sunflower. 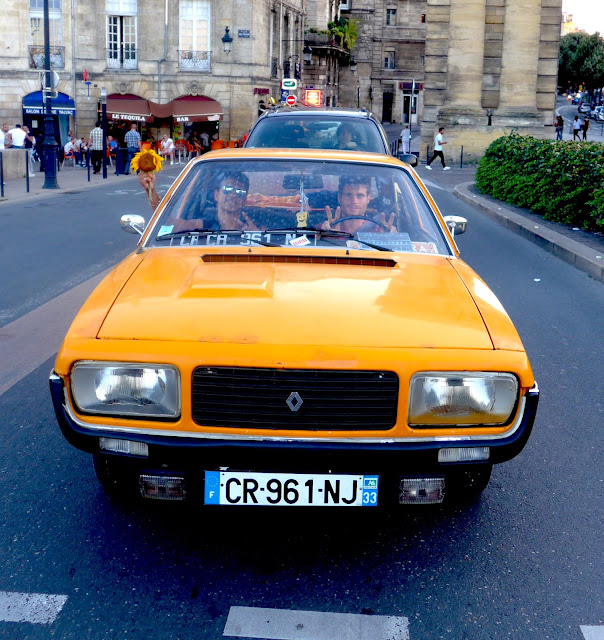 Posted by writing and other stuff at 20:37 No comments:

I'd slightly forgotten about my sub-blog of buildings but this sighting of a bungalow around Bournemouth somewhere had to be recorded.
Luckily, I was on a bus otherwise I might have been compelled to ring on their doorbell (which must have a tune - I wonder what . . . something minimal; a simple, 'ding-dong'?) and ask if I could see the interior of the house. Judging by the 'garden' I could imagine a house full of carpet and armchairs covered with plastic; a lonely microwave in the kitchen and a freezer full of ready meals . . . or not. Perhaps it's an orgy of colour, musical instruments, stolen Fauvist paintings and a pantry full of home-made conserves. How fascinating it would be to see behind those flowery net curtains.
I wonder what the garden once might have been like when the bungalow was constructed in the 30s, certainly not an airport runway - how could anyone want/need so much tarmac? and where are the fleet of cars that require the tarmac?
Or . . . this could be some sort of alien observation craft; look at the plinth the building sits on - almost unconnected to the ground as if ready to move off in the bleak early hours to another suburban destination. So, maybe no carpets and armchairs, just banks of bleeping equipment, harvesting the movements of city-dwelling Sapiens. 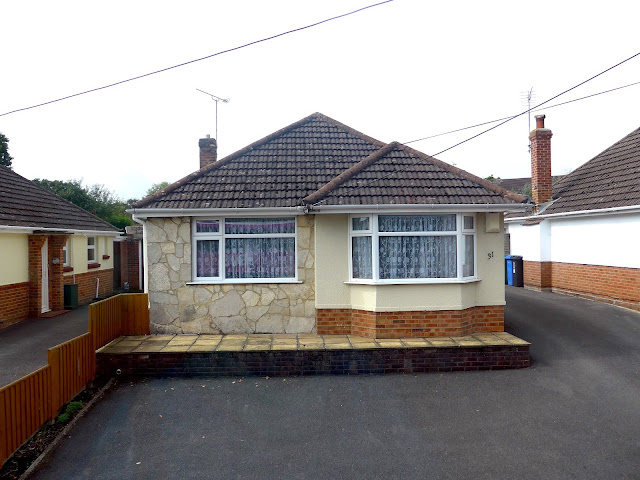 Posted by writing and other stuff at 22:19 No comments:

Cream-tea diet does not work. (See last post) 'Gosh, really?', you may say with a wry smile. Yes. I put on about 2 pounds in eight days, even though I was fairly active.
Oh well, back to the reasonable-sized breakfast (egg on toast) larger lunch - stir fry/curry, or similar, and small supper, salad/soup . . . maybe a small piece of buttered toast, bitsy bit of cake, and no wine, or at least only one small glass.
If I do this, I can keep to my desired - or at least, getting-into-favourite-trousers weight, while my lanky husband laughs and crams as much cake into himself as he pleases. 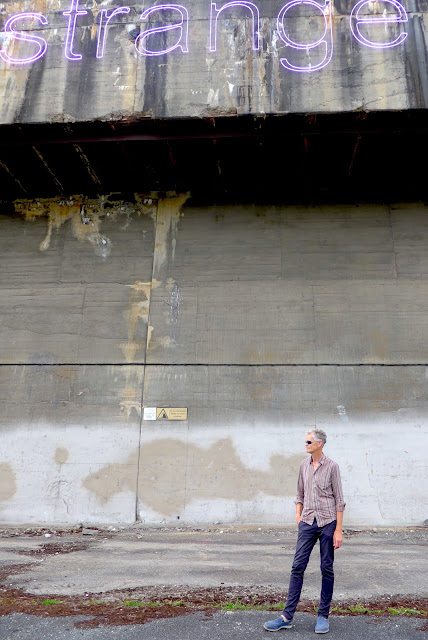 Yes, strange, and unfair. Mark can still get into the pair of checked  flared trousers he had when he was eighteen that we found at his mum's house.
Posted by writing and other stuff at 06:34 No comments:

I'm trying this one out . . . or was. I've just spent seven days with Mum back in the UK, mostly wheeling her around tea-shops between downpours.
It's a guaranteed brightner - 'oo, lets have a lovely cup of tea, AND a scone, jam and cream'. Whatever the prevailing mood - and being trapped in a care home doesn't make for elation on the whole - Mum rallied with the sight of the afore-mentioned calorie-laden trio being placed on whichever tea-room table we happened to be sitting at. As did I. Really, what can be more wonderful than a good cream tea, and I think I could be now classed as an expert.
Cake . . . well, you just eat it, really, but the scone thing allows for a bit of architecture and sculpture, cutting at the right point, spreading the jam, heaping on the cream, and then not dropping the whole thing if it's all fluffy and crumbly . . . Hm, could I have become obsessed?
I reckon, and I could be wrong, that if you eat a sensible breakfast, a not too calorie-stacked lunch and a light salad/soup/stir-fry in the evening, the cream tea can be wedged in at about four 'o'clock and not make a great difference to the flab, especially if - as I was doing - you walk up and down hills, push heavy objects about, and worry a lot.
So. Tomorrow morning, I'll do a weigh-in and may regret my greed, or not . . . could be the next fad. 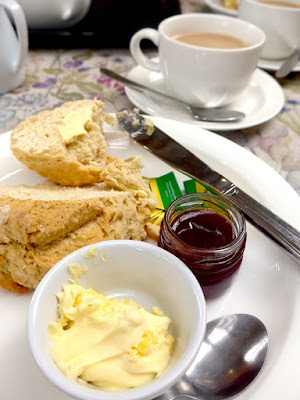 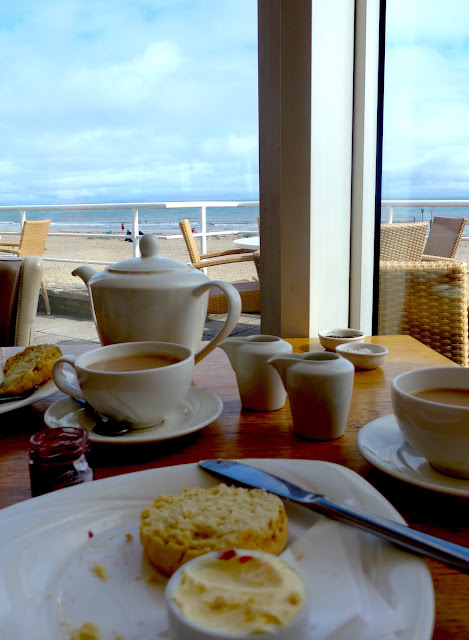 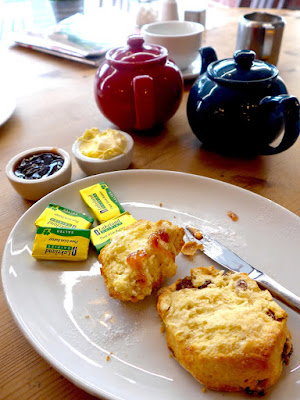 The reliable 'Cloister's' tea-room in Wimborne, Dorset. Scone rating 5 stars.
Posted by writing and other stuff at 05:06 No comments:

We know how to have fun

The British on the beach. 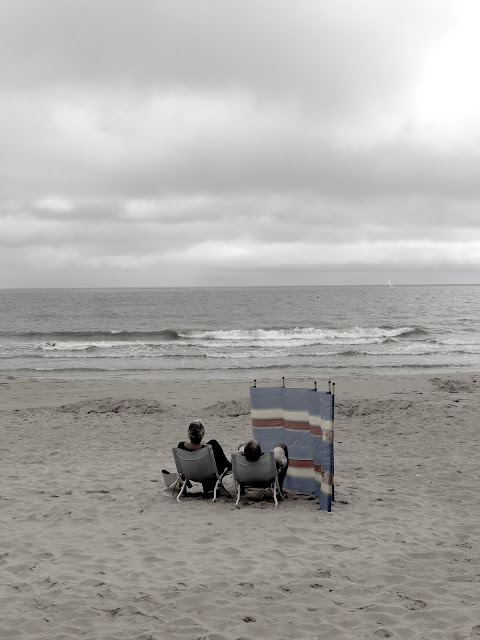 Posted by writing and other stuff at 11:16 No comments: