Mark's cakes need a wider audience, we have jazz sets ready to go, and boxes of brocante collected over the years so, why not?

Just got to investigate the bureaucracy for such an idea... 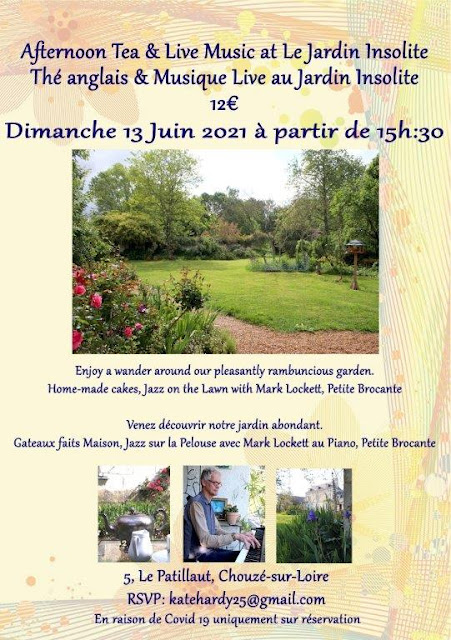 Posted by writing and other stuff at 20:30 No comments:

Last year during lockdown we sold up in the South of France and headed to an unknown-to-us region of France, the Loire Valley. After two viewings and a 'YES- we'll have it', the house, garden and immediate area were also unknown to us. Such was the coup de coeur, or literally, blow to the heart; in English . . .? Mm, love at first sight?

As we are planning to set up a gîte and jardin du thé a name had to be found. After a few 'err, what about this', sessions, Mark suggested Le Jardin Insolite which is in fact perfect. Insolite is a difficult word to translate: curious, unique, quirky, unusual, veering towards weird and even eerie and downright odd. Anna, the previous owner and master architect of the garden, created from a field - starring not a single tree - a verdant paradise crammed with roses and herbaceous borders that even Capability Brown might have nodded at and said, yeah, not bad, or something more akin to mid 1700s speak. 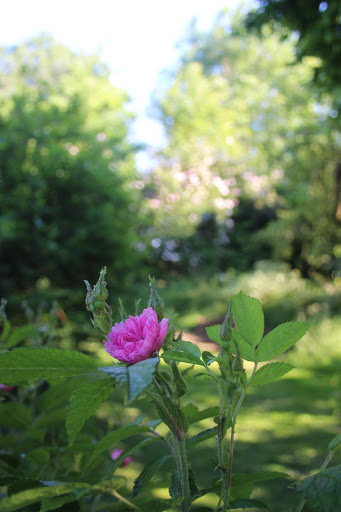 So, the insolite part . . . we will over time add to the garden: bizarre sculptures by Leonora Carrington (I wish) and home made little cabins, groovy chicken houses etc, but for the meantime it's a verdant paradise with the occasional TJV/freight train passing at grand vitesse just past our boundary, AND, sadly, a bunch of bored dogs who bark and howl at intervals thus crushing somewhat the lazy, contemplation as one wanders, admiring Anna's, and our, work. We've got used to it now and they (the dogs) do respond to the odd shout, and we get on with the neighbours - and that, especially in a rural community, is valuable to say the least. 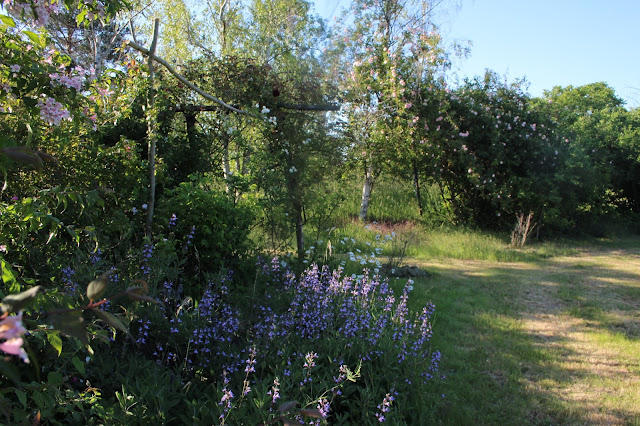 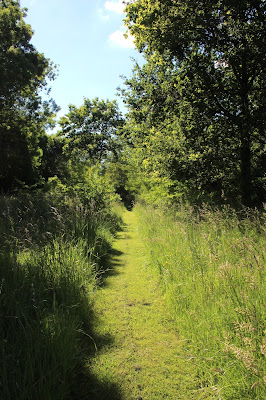 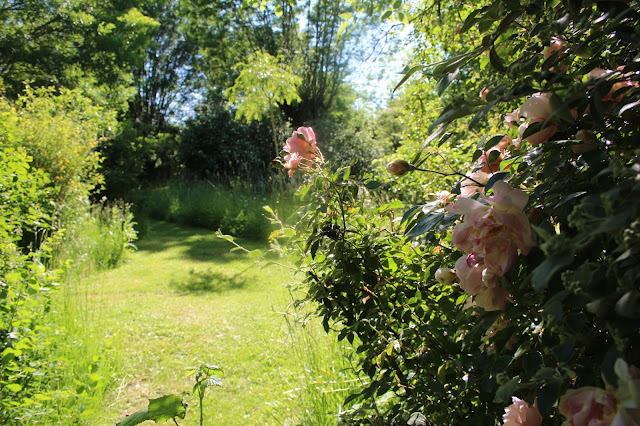 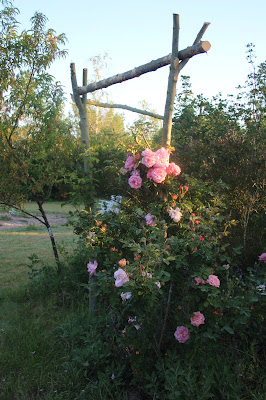 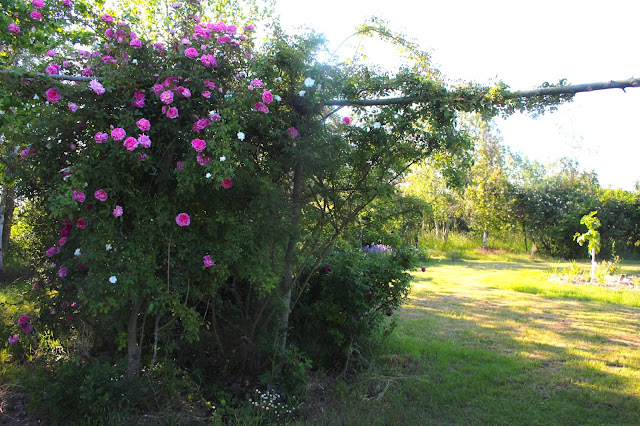 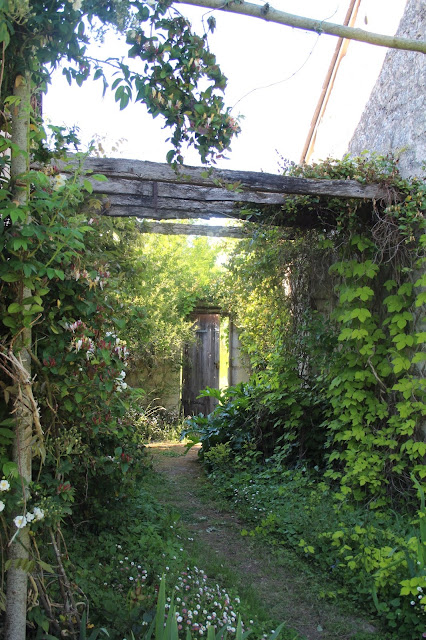 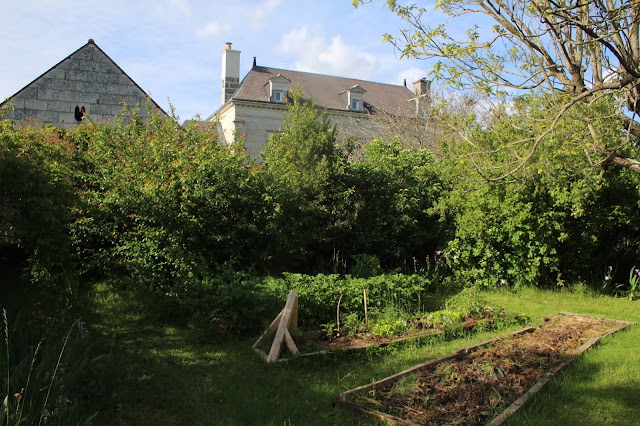 I recall that particular amble around the garden on the first viewing; a hot, mid-summer day; the buzzing of insects, the peaceful sound of the little river that runs through the property, the scent of roses, and then the roar of a train on its straight run from Tours to Nantes passing by the line of ash trees that forms the land's delineation. The estate agent had eyed me carefully, no doubt gauging the reaction. It was a slight surprise but our last house had a railway line nearby so not out of the question - and it isn't something likely to appear even on the most honest of estate agents details: hectare of mature garden complete with minor earthquakes at irregular intervals. I like trains, but if it had been a busy road . . . it would have been a brief viewing. 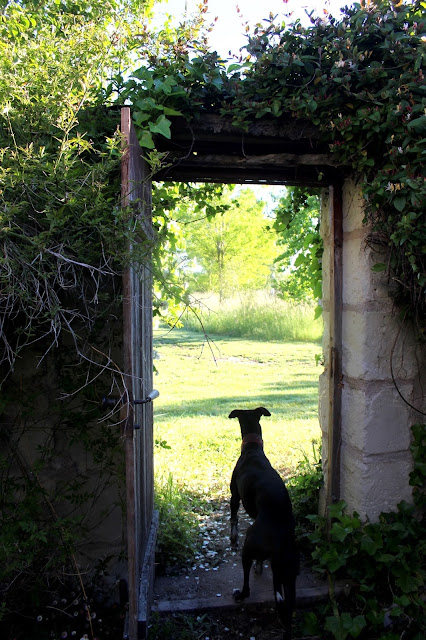 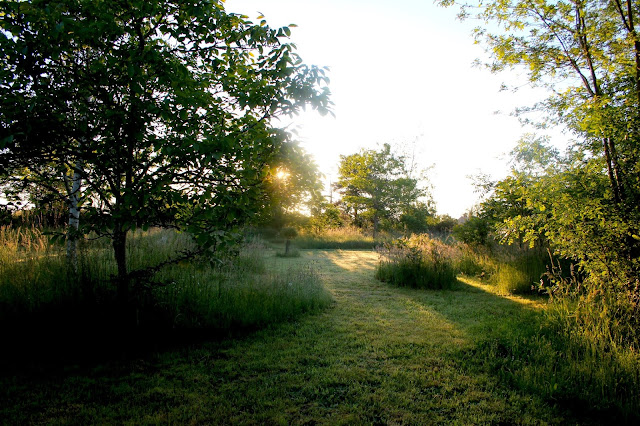 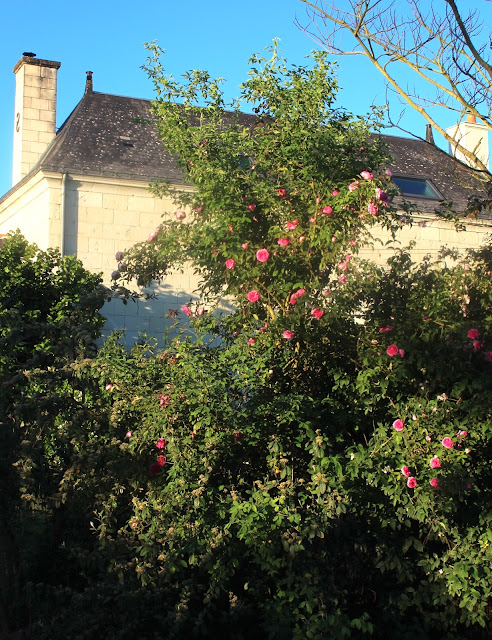 It's always a lot to take in on two viewings, especially a largish house with outbuildings and a lot of land but luckily we were both in agreement and knew our son (and dogs) would approve, so, here we are gradually tackling the larger house projects and tending the garden as much as possible. Watching a garden develop through the months is fascinating. Our old house was very different - starting with a baked wasteland and creating something verdant was a challenge but it worked, and luckily our buyers are keen gardeners too so I don't feel sad at leaving what we created there. 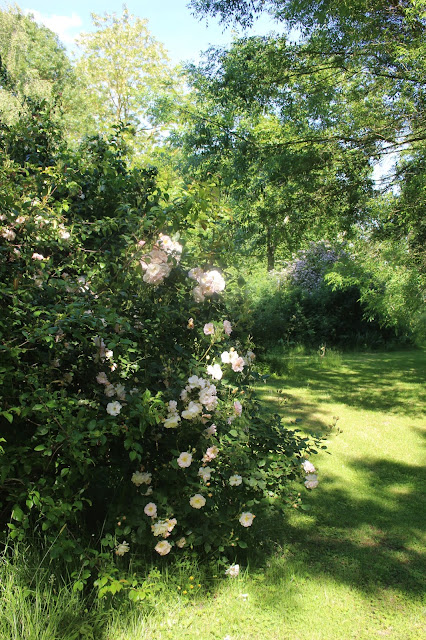 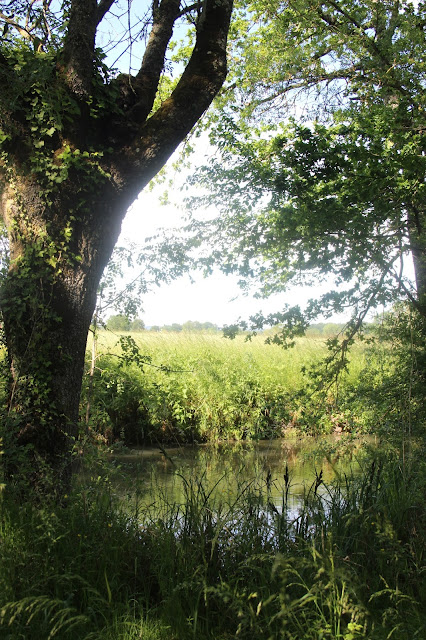 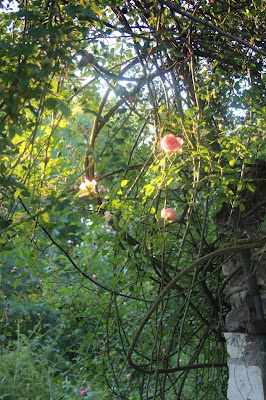 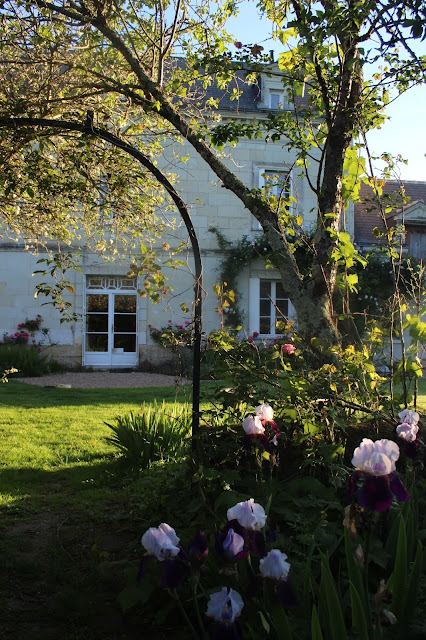 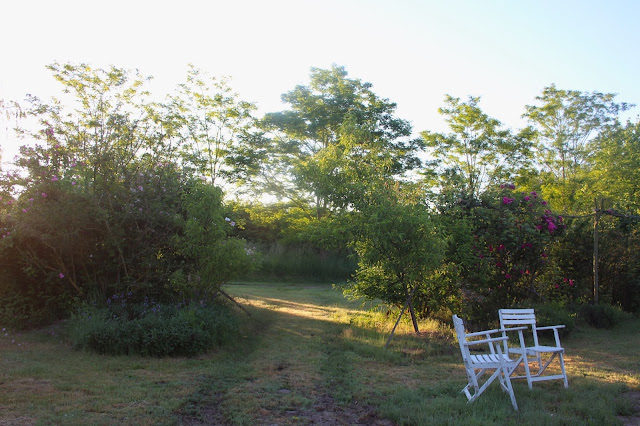 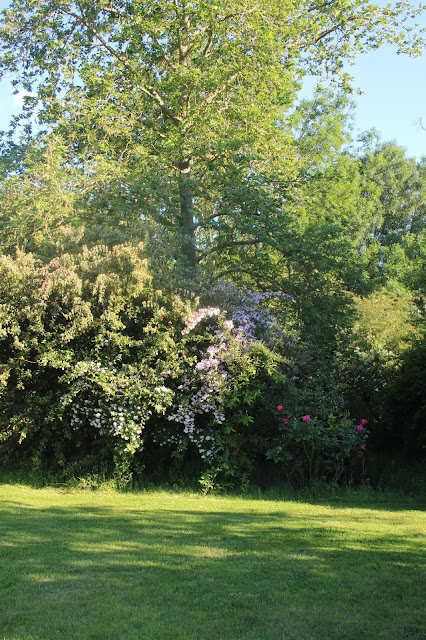 The months here have been marked by leaves changing colour and falling, the spiky tree outlines of winter; the first strident forsythia blossom, daffodils, hundreds of different irises, japonica, and now the roses; waterfalls of pink, peach, yellow, red and white. Anna planted two hundred rosebushes and climbers and each day we are seeing new varieties blossoming. My favourite name so far: Rambling Rector. We have started to add a few things such as a pond (under construction) area in the back garden and various trees planted in the early winter but for now it still is very much the garden that Anna planned and planted.

She has now moved to a house with enormous undeveloped garden about twenty minutes away and is bravely starting on the planning and planting of it. We wish her well, and thank her everyday for making this unique and insolite, bird and insect flower-filled Arcadia. 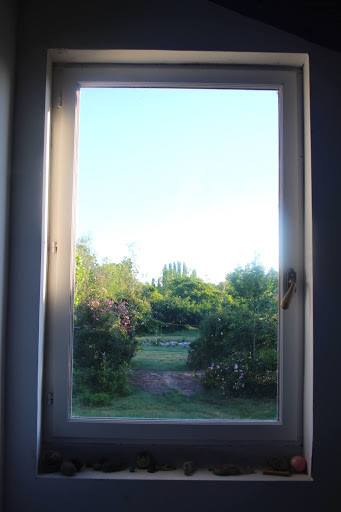 Posted by writing and other stuff at 13:06 No comments:

One's intestinal activities as described by Lord Peter Wimsey . . . although, you will be, dear reader, glad to know that this post is more about the doings of our house.

When you buy a house in France, possibly the same in other countries, one of the main things that crops up, rather like the cam belt in a second hand car, is, has the fosse septique been done? Inevitably if its an older house the answer is, no. Add a boring waste of several thousands of euros to the list of things that will have to be done and sign at the notaires where they will remind you that this has to be dealt with within a year.

We did consider ignoring this as the current system, just like in the house we left, functioned perfectly well. The fact that the our new abode's fosse is a pipe that runs from the house, under the road and into a field situated in the next department of France was never going to result in a shrug of the shoulders and a beh . . . ça va aller from the scary SPANC people - water authorities or, Small, Pancake-Adoring Newt Catchers.

Within a week of moving in I was already checking the various options knowing any system would take months to sort out. Option One: Huge plastic thing the size of a van buried in the ground which would have to be emptied by one of those poop lorries. Option two: A micro station. As far as I could tell this was similar but cost a bit more. Option three. Phytoépuration. A reed bed system which has only been approved by the small pancake adoring newt catchers relatively recently. It costs a little more, but doesn't have to be emptied and you can at least see at what you were forced to spend money on. That being a very large wood-clad concrete box containing reeds, sand etc.

We possibly could have done it ourselves but I could imagine the endless checking and rechecking, list of things we had done wrong, crashing the hired mini-digger into trees, and so on. With so many other house issues to be dealt with we went for the paying-through-nose option and eventually the rep from Aquataris appeared, measured the ground, did various carrotages (long sections of earth) to check the drain-ability etc and deemed that it was very likely that it would all be approved. It was approved after several weeks and the work planned for mid-may; also timed that the plumbers could link it all up at the appropriate moment and that any doings would move effortlessly - nice! into the new system rather than old pipe into field. 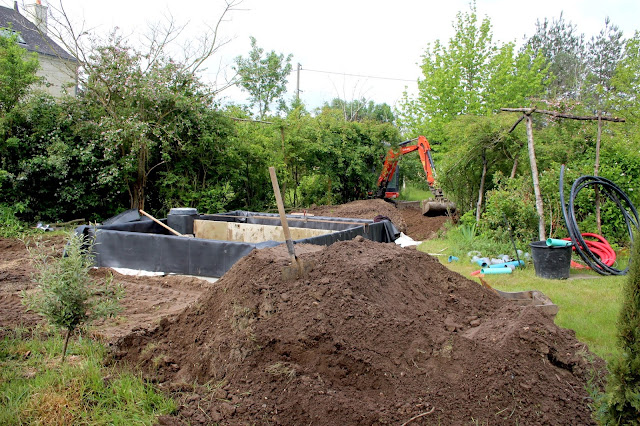 The day arrived, and unlike the plumbers, the firm of landscapers commissioned to do the job turned up! already a great plus. My imaginings of a totally green system fairly quickly evaporated as I noted the arrival of huge amounts of plastic pipe, plastic sheeting, plastic other things but still a lot less plastic than we would have purchased with option one or two. The employee was a blur of movement for three days, digging trenches, sawing concrete plaques, laying sheeting, gravel, sand, planting reeds and much more. He finished before the plumbers turned up, left me with instructions (eek) and was off to the next installation. Apparently these are becoming more and more favoured with the company completing one a week in our area. 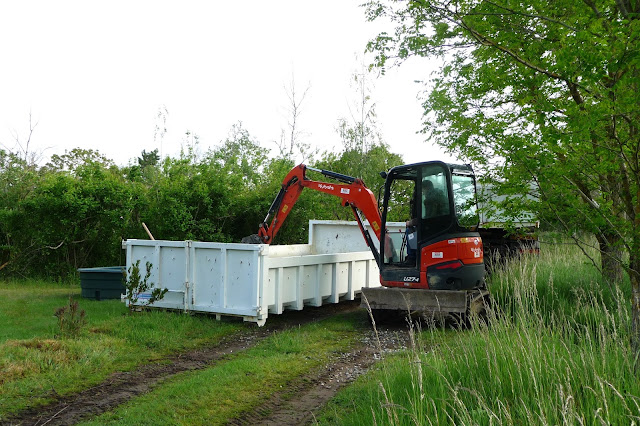 So, it's done, all connected up and the baby reeds have already grown several inches in a week. I do recall my mother saying, however, that when she was a child, her father put their doings in a pit in the garden then when it was rotted they used it on the veg plot. Cost of . . . nothing, no meters of plastic tube, no pumps, no concrete, just rather amazing vegetables . . .

I liked the tube in the field, and we could have bought a harpsichord, or built a big pond or bought a newer car instead. Sob. SPANC are coming to check the installation next week and according to the installer we may have to put up a temporary small plastic fence and then take it away again when they have gone. I can't imagine how anyone would drown in slightly damp sand before which they would have to remove the metal grid system to get at the sand. And I really hope we don't have to pay an extra fifty euros to have the pleasure of seeing the plastic fence for fifteen minutes which I think was on the quote. Madness. All of it. However I still feel it's better than seeing a large piece of disturbed turf under which would be something one spent a vast sum of money on which would never be visible again until it was deemed to be beyond its serviceable life and would have to be dug up and replaced with another van-sized plastic thing. 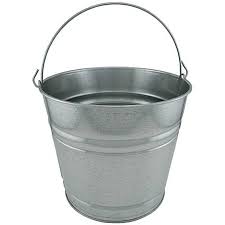 Cheaper option at 12 euros 53 cents.
Posted by writing and other stuff at 19:52 No comments:

The tea time sessions present: Undrowned by Everything Everything

Email ThisBlogThis!Share to TwitterShare to FacebookShare to Pinterest
Labels: Everything Everything, Kate A Hardy writer, Undrowned

Plant pots, hedges and human learning - or not...

Faced with plastic engulfing the planet and my feeble question at the garden centre as to why plants can't be put in small cardboard, decay-gradually-into-the-Earth type pots being met with a shrug and a 'people won't pay for an alternative to plastic' response, I was reduced to near tears of wonder at the sight of this... 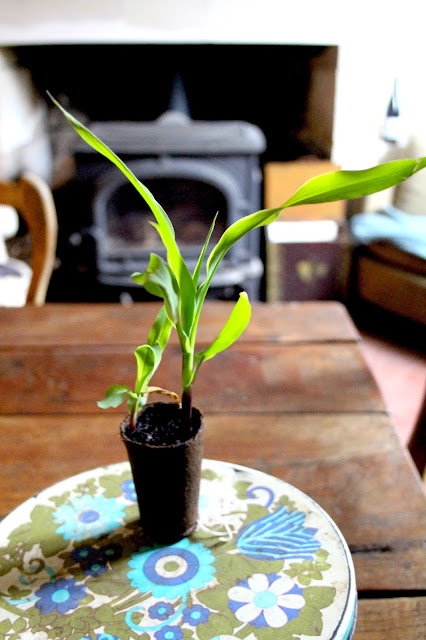 A small maize plant - two actually, in a recycled cardboard pot as sold by our local bio store. All the plants in the shop were happily growing in their snug little pots, and yes, they were probably more expensive than yr average plastic 'godet' but I reckon most people might be willing to pay an extra few pennies to know they weren't adding to the local 'let's pretend we're going to recycle your plastic' landfill/burning operation, and that they might be supporting a company interested in protecting what environment we have left... 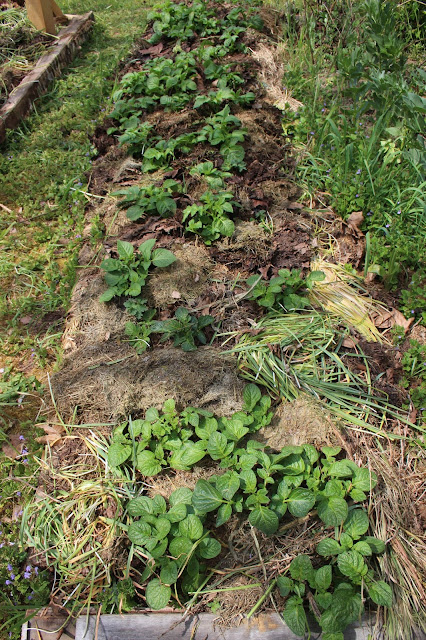 Our very contented potato plants in their mulchy bed

After watching many permaculture/food forest Youtubes I've taken to building 'Buttes' or mounds of compost, hay, leaves, grass cuttings, etc as an experiment to see what likes being encased in a mulch rather than exposed to climatic ravages in bare earth - and it is bare here currently, far too little rain. Our neighbour farmers are busy ploughing with vast tractors, watering in wind and sun at the hottest part of the day and perhaps wondering why everything dries out so much - could be to do with the fact that there are virtually no hedges left... in fact, I was reading about an environmental activist living in a shed on a remote Scottish island who recalls his first stirrings of nature-demise incredulity were as a kid when he heard that farmers were paid to dig out hedges.

There is the sight of small (very small) movement here - the local councils awarding grants to farmers to put hedges back in... we live and learn, possibly.

Posted by writing and other stuff at 13:23 No comments: