Or at least the writing side of me, not all the: 'I worked in a chip shop/ Mars Bar factory/I was an architectural drawings maker/ photographic stylist (driving around London like a manic cabbie) for far to many years / etc.

Time to knit together all the years that I've been doing this writing thing and lay it out on paper, or screen. This post will become paper sooner than later as I don't at all trust this spooky internet place which will no doubt disappear within a not so far off point…(see Londonia).

I've been making blog books as I go along, a strange and rather expensive procedure where one downloads the chosen posts into afore-mentioned internet place/Blog-to-Book company, and a shiny hardback appears from somewhere a few weeks later.

Actually . . . I think CVs usually start with the present day's activities, but it feels more relevant to me to start at the beginning.

Mr mint and the monster

My first wax crayon, pencil and floppy exercise book novel at the age of about seven.

A story of fussy eating habits inspired by our own fussy eater, published by Puffin Books in 2004. 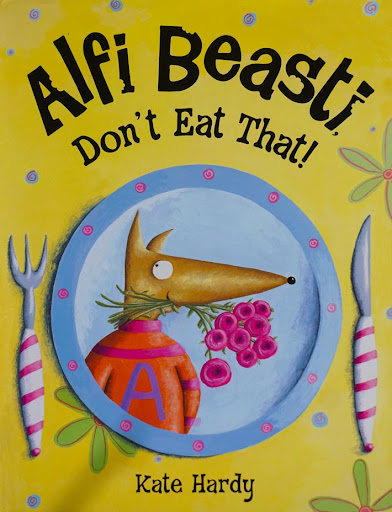 After a period of illustration and painting I started writing for the adult market, starting with my trilogy: 'Going out in the Midday Sun'. These books have links with Londonia, and most of my other novels. In fact, all my novels have links with each other . . . 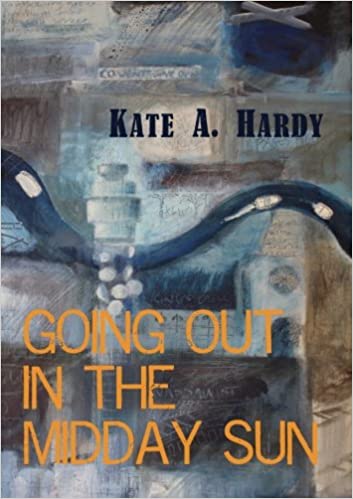 The idea for the novel commenced, as often happens for me, during a swim - woman, in the future, living in a church with a horse named Kafka. The story changed many times but the main character, Hoxton, remained true to my first idea of a feisty female trader living in the chaos of a lawless city sprawl beyond the order and constraints of a central power base. The novel is dystopian but I'd rather term it 'dyst-hopia'. Grimness with hope.

...Londonia by Kate Hardy is a magnificent book on many levels. It's impossible to categorise this as a dystopian or sci-fi work, although it is both. It's much more than that, completely shorn of every tired cliché from that genre; it manages to combine no small dread of an only too prescient future with a glorious story of human spirit...

Londonia was published by Tartarus Press in 2020. 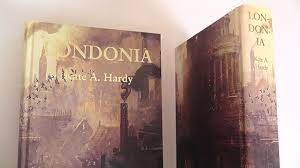 Smithi, Hatfield and the South (working title) is the follow-up book to Londonia and has been edited to publication standard.

Adapted from a short story, Dog; from Dog, and other tales, my short story collection.

An alien arrives on Earth in Epping Forest and makes his way to shelter in a woman's shed. Assigned to study humans and report back to his planet he instead falls in love with the shed-owner and becomes marooned. His presence on the planet slowly but surely changes everything for mankind.

The tale of luckless, book shop owner, Hamish Harris, and how the discovery of a never-before-seen book rockets his life into euphoric chaos.

The original short story which inspired the novel was chosen to be read by Anton Lesser on the excellent and now sadly defunct site, 'Cracked Eye'. I still have the recording and it is delicious...

After an untimely death within the back end of a pantomime horse, Marion Peel arrives in what she assumes is the local hospital but is in fact, Perpetuania, where she faces certain complicated time-travel choices concerning her future existence.

An eighteenth-century couch's narration starts within a Loire chateau as he/she observes the antics of the building’s new owner, rockstar, Todd Brightwater. The story follows the changing fortunes of Todd, his offspring, and on into future generations of the Brightwater family to conclude during a far-off time on Hampstead Heath as the couch becomes the centre of the then inhabitants' evening rituals.

My current novel set in an unspecified time following the life of boatman and ex-town crier, Opera-Jo.

6,000 words in and I feel it's going to be a very   long   story - in a good way; already the tangents are taking hold of my pen/index fingers/keyboard.

So, there we are. Writing is essential to me, and I work on whatever my current project is every day, the most productive time being 6:00 am with tea and hot water bottles in my study (bed). 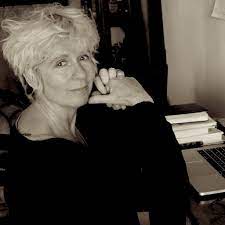 Posted by writing and other stuff at 09:39 No comments:

A new book, an idea, an end somewhere far in the distance, and a lot of words to get there.

As usual, I have a vague outline and the plot will develop as it will, characters evolving, diminishing or growing in importance as I get to know them.

A sample featuring the current protagonist, 'Opera-Jo' as he embarks on a sea voyage with an unknown crew to part of Hampstead Heath, now an island surrounded by a black ocean.

The pile of each bod’s effects still rest upon the shore. When the loading is complete, we claim our baggage and advance to the greatboat. A mec known as, Three-eared Mikael, gestures to my sackbag as I lift it from the pebbles.

“Why, pray, does thee choose to carry a dead crocodile with thee?”

I adjust the bag so that the item in question’s head will be protected from weatherly elements we may encounter. “It is not dead . . . well, it could be said to be in a façon, but it is preserved – stuffed.”

“. . . Dac, but why does thee bother to lump about a stuffed reptile?”

“It is in truth an alligator that belonged to my great, great, possibly further greats – I have lost my ancestry map recentime – grandfather. It was fabried by his weld-up, Lily, during the time of Stuff. I guard the creature in part as a reminder of that lost era but perhaps more as a family momento.”

“She filled non-living beasts with wadding of some description?”

“Thee ask a too-many-questions. In truth, I have one for thee.”

The mec turneth to me with a sullen expression. “Wot?”

“Tha appears to be blessed with the statutory ear-requirement, so, why does tha name suggest otherwise?”

He moves his eyes from mine and peers at a small crab which makes its way abroad an ocean-bleached branch. “I speak not of it.”

“Did that have another ear?”

“I will speak not of it, even for coinage.”

Posted by writing and other stuff at 04:34 No comments:

Mostly. The straw cost 1:50 euro a bale from a local farm, and the mud, totally free, from our occasionally sluggish and oozy river that passes through the garden. Ezra, balanced on a plank, shovelled the mud into a wheelbarrow and we added the straw bit by bit until (hopefully) the right texture was achieved. Time and weather will tell, but from looking at various Youtubes on how to do cob (torchis in French), I think we did ok. 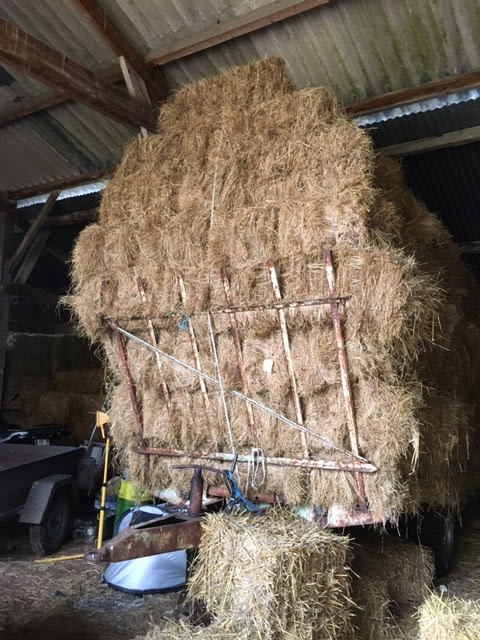 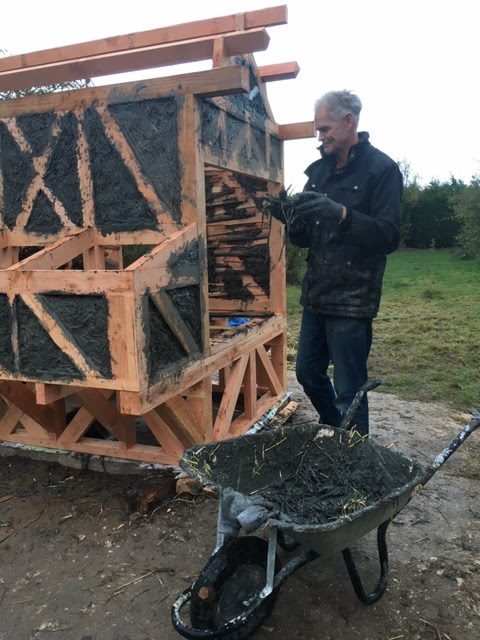 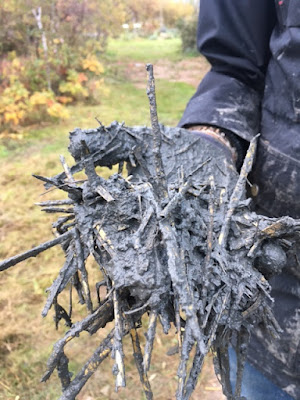 I'd already a day nailing and screwing bits of plank, sticks, etc onto the inside to hold up the mud mixture and so far, it's looking solid. Next, the roof, and we're going to attempt to do DIY slate and zinc. Such is this structure's absurd over the top-ness  that we might have to honour it with a few unusual birds as well as yr usual rusty types.

Posted by writing and other stuff at 01:29 No comments:

We are supposed to be redoing an outbuilding to make a gîte (see previous posts) but have been sidetracked onto building a chicken house, or rather wooden palace. In celebration of Ezra completing a year of structural carpentry he was given free rein to devise a coop. The finished plan was a colombage edifice (half-timbering) and the wood duly ordered. He has admitted since then to overcompensating on the wood's thickness - it will certainly never become dislodged by any amount of westerly gales. 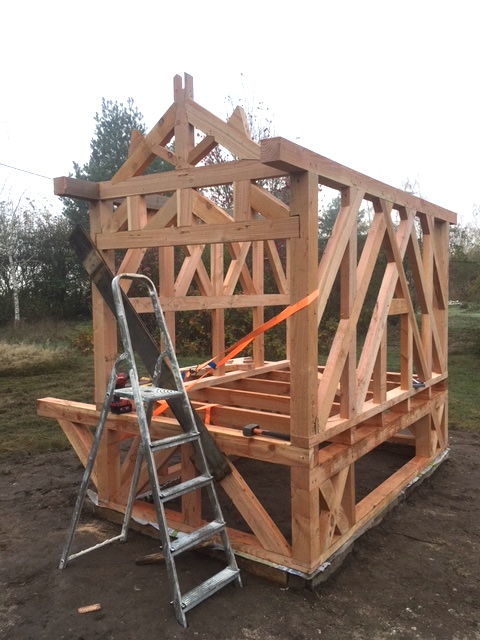 I have been screwing on batons of old wood on the inside of the palace all day, in preparation for the mud and straw concoction we will use to fill between the main structure. Ezra has been making the rood beams and end wall; tomorrow, the nesting boxes, the chicken and human doors, then we'll do the roof, hopefully with recuperated slate tiles. Then the compound, and finally, some very lucky chickens... 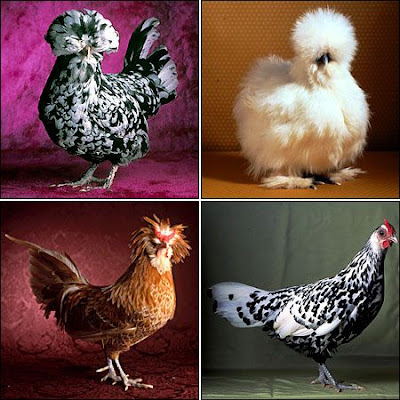 Probably just yr average rust coloured ones, not these...

Posted by writing and other stuff at 11:22 No comments:

The view from the hill, a 70s childhood. Cats, nude men, and chicken soup.

In previous of these posts I mentioned the one bed flat we (me and Mum) inhabited - Seymour Court, Colney Hatch Lane, North London. I just idly Googled it to look at the block, and there it was . . . our actual flat, completely revamped (of course it would be after a few decades ago) and at a scary price of well over 300,000 quid. I think Mum paid something like forty pounds a month rent back then . . . 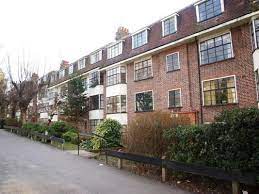 My childhood life at around nine or ten revolved around the block of flats and its, for London, generous and fairly wild, shared gardens. Mum's own patch had a holly tree, iris, marigolds and cornflowers. We also had a succession of tortoises, but no cat, something I desperately wished to house but Mum stated that the rental agreement didn't allow such beasts. I think, looking back now, she probably just didn't want any added burden. Someone who did have cats was the woman who lived opposite us. I now only recall her sitting in a deck chair in her patch of front garden wearing nothing much but a flamboyantly coloured bikini, leathery skin exposed. When she went away, which seemed fairly frequently she would employ me for a few pence to feed her cats, something I, being feline starved, enjoyed.

One cat nourishment episode led to my first viewing of a human male in birthday attire . . . Unusual and unexpected occurrences often implant themselves, this was no exception. I had entered the flat, done the cat fuss and had gone into the bathroom where the feline plates, for some reason, were placed next to the loo. A green spotted shower curtain was drawn swiftly back by a large hand and there, dripping, stood a hairy, nude male person. I know nothing else happened, and the woman had later explained that her boyfriend had returned earlier than she had expected. I can't recall what he had said, and I assume I had turned and run, the spectre of the loofa dangling between his legs somewhat disturbing after living in an entirely female habitation for years.

The bikini woman lived above the flat of a hoarder. No one then spoke of people hoarding as such, he was just a rather eccentric man who took a lot of stuff into his flat and never put any rubbish out. When he died I remember my mother telling my godmother that the flat clearance people had found over six hundred milk bottles in his front room.

My best friend in the locality was Miriam, second daughter of a Jewish family ruled by a stern and, I think looking back now, violent father. Miriam's mother in my mind always appeared grey skinned, slight, sad and possibly scared. Their house, compared to our flat, which was amply heated by a communal boiler, felt continuously icy other than in high summer. They seemed to have no heating other than the gas stove which seemed perpetually alight, the door open to heat the kitchen as much as possible. A pot of chicken soup was nearly always perched on the stove top, and if Mum was late back from work sometimes I would be invited to share, sitting at their tiny kitchen table while the father ranted from the sitting room. I wonder now what he ranted about. Funny, how kids just accept what ever was going on as normality. 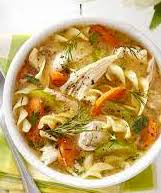 Posted by writing and other stuff at 05:50 No comments: