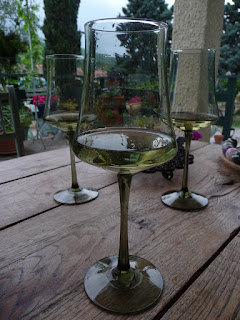 I (if I ever had the patience, and indeed the intelligence and power to spell correctly) would do a PhD thesis on the comparisons of vide grenier and boot sales. It's a fascinating thing to see the detritus of human everyday life on display, at least in the western world. I don't suppose there would be a great deal of excess at an Inuit equivalent. Damask canoe cover, unused set of Ikea BBQ fish forks, velour husky bed with matching lead . . ?
At boot sales —depressing acres of drizzle-infested mud fields filled with persons keening for electrical equipment, one could generally count on seeing these items: heated rollers, stationary bikes, and other 'sport' equipment bought in a panic-moment after Christmas excess; yogurt makers, twenty three tons of plastic toy landfill, and at least fourteen copies of top gun.
Observations on the vide grenier (attic clearance).
Generally they take place in non soggy fields with sun (a better start). Similarities: the discarded health equipment, slightly less toy landfill, A LOT of fondu sets, which we have managed to avoid so far, even though their attractive 70's colours call me . . . and in recent years, a rash of those stupid sets of glasses with stems but no bottoms that have to sit in a stand — there is no hope for mankind.
Away from my serious studies . . . the simple pleasure of wandering around in a slouchy fashion on a Sunday morning with a pocket of change, joy!
En famile this Sunday we visited a pretty village near Limoux and took in their fairly typical V.G complete with sun, acid coffee and bad parking.
Came away with treasures: the glasses above illustrated — marvelous 1970's smoked glass, a snip at two euros, and we were probably the only people in the whole of the Aude valley who would wish to house them; a rusty cow bell, records including an Arminian church service and a production by the Bulgarian tourist association, and . . . a bike! My old parchemin one, now classed as a death machine as it no longer features brakes has become an installation in the garden and I am now the proud owner of a happy 80's style shell suit-coloured two wheeler with brakes and gears.

Posted by writing and other stuff at 22:25