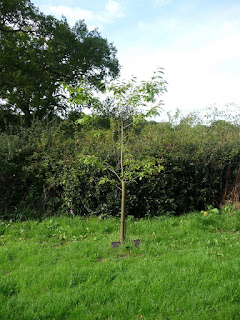 And death.
While in Dorset visiting my Mum, I went to pay a visit to my lovely uncle in his resting place under this young tree.
As a muser, I spend a fair bit of time thinking about the after-life, if there is one. Whether one might return as a dung beetle, or a table leg . . . or perhaps some famous game show host of the future.
Anyway, uncle Ben is in a beautiful place called a burial ground as appose to a churchyard or crem's grounds The first bodies installed so to speak, are now nourishing majestic oaks and rowans as tall as the eves of a house. Compared to an average graveyard I think it would be a nice place to while away a few years watching the blackbirds nesting and listening to next door's trees rustling.
I hope Ben, who was an expert wood carver and lover of birds, trees and nature generally, is happy there.
My general mood at the time of contented melancholia was slightly pushed off its armchair when I found the following plaque dedicated to a certain Reg someone: 'Well, he tried . . . " Tried what? Morris dancing? Taxidermy? or maybe they should have left out the comma. Perhaps it was supposed to read 'WELL HE TRIED' in a sort of Victorian stiff shirt and brass fanfare sort of a way.
One cannot help reflecting on what ones own plaque might say: She piddled around a lot; she had a lot of ideas; she could really spot a bargain at a vide grenier.
I just looked up the definition of death in the dictionary: 'state of being dead' — don't know quite what I expected. Also saw this phrase 'death on'. Apparently means to be fond of/ good at. Related to 'dead good' I suppose. Sounds like something a thirteen year old buttock-exposing trousers-wearer might say. New verbal trend: 'Hey — death on!'
She was good at procrastination.
Work.
Now.
Posted by writing and other stuff at 08:05