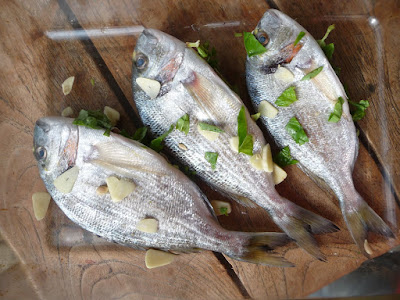 Was in the kitchen with Mark yesterday eve preparing confiture de grenade. He surprised me by asking if I thought we spent too much time cooking . . .
Odd, I thought. . . I suppose we do spend a fair part of each day making food in various forms, but it just seems a normal way to exist. Then I had a really good think during the day about the extremes of food preparation in the world. Food as fuel to food as a luxury art form.
A good example of each I can think of comes from reality TV programmes, which I did watch, IN FRENCH, purely for improving my language skills, of course.
One, which I think was called 'welcome to our tribe' was appalling, but fascinating viewing - French family removed from consumerism and plonked in Amazonian jungle with strangely accepting indigenous family. Suddenly removed from the choice between Super U and Leclerc, the French were caught up in the daily preoccupation of finding the next meal. The staple base of the local diet was a yam like vegetable, which was chewed (by the womenfolk) and spat out creating a ready liquidised pulp . . . good viewing as the Parisians were invited to try it.
On that particular day it was decided that the men would go on a notoriously dangerous mission to trap a type of monkey for the village to prepare and eat in the evening. Four hours of jungle hike, success, four hours back, monkey prepared, eaten.
Cue next day.
Actually, the most interesting thing was that the men in the French party on all the programs that I saw became more and more keen to adopt this new life of building, hunting and survival, far removed from snug car interiors and flat screen TVs.
One of the worst R. TV shows I stumbled across was a vile program called 'lets bitch about somebody else's cooking' - four happy folks from across France, each stage a themed dinner chez eux. Each time the three not cooking, are invited to dine at the fourth's place of residence. (You might have seen the same UK version or any other country's version). There then follows a hideous evening of critical comment on the food, the decor, and not the meaning of life etc.
Food as leisure activity, or food as a means of life support.
I would hope to be somewhere in the middle.
Pleasure in choosing good basic ingredients, liberal enough to think, what can we make with one egg, half a cabbage and a tin of chickpeas, and occasional forays into risqué areas of buying food to follow a real recipe . . .
Posted by writing and other stuff at 23:50