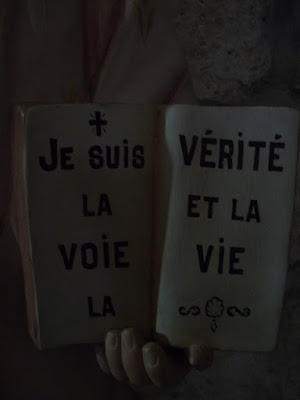 Well, which is it?
Seems there is a choice of dates regarding the fin du monde. Or maybe we are in for it two times - the first date might not quite end enough - lets leave it 9 days and have another go?
Either way, it's going to be interesting up there in that small village, although probably not for the inhabitants, unless they are planning were to sell/rent their abodes out for a huge sum and bugger off to somewhere with palm trees and curving white beaches.
Think I might start a secondary end-of-world theory to appose the main 'around-here' theory that a space ship is going to appear from under, or within, Bugarach mountain, possibly chauffeured by the Green Lizard people.
There is without doubt a space vessel under our shed.  I've often heard odd clanking in there, and someone has been at the jam stocks, and I'm sure once or twice I have seen rats carrying large pieces of sheet steel towards the noble structure after dark. It would explain why Mark can never find any tools - nothing to do with me . . .
Rats are far more likely to inherit the world, or at least its smoking remains, than lizards, or is it that giant lizards are going to arrive from space? Will have to question the small brown ones in the garden. I observed a few yesterday basking in the early spring sun. They didn't seem to be any different - no sitting in deck chairs with smug expressions or looking at estate agent magazines from galaxies beyond.
Just looked up some Mayan info; there is another date. The 23rd Dec 2012 which is heralded as IT. So perhaps December is going to be less heavy on the Christmas madness, a little more concentrated on the DIY side perhaps. Bunkers and the like. Bricolage should do well.
Perhaps it's all true.
I did see a film at the cinema, when I was about eleven, about The Nazca lines in Peru: the immense patterns drawn on the Earth's surface that can really only be appreciated as forms of animals, etc, from the air. If anyone is really anticipating the arrival of a passing space vessel, there might be a better choice of bus stop, not rural France.
Posted by writing and other stuff at 22:58

Email ThisBlogThis!Share to TwitterShare to FacebookShare to Pinterest
Labels: aude france 2011, bugarach, end of the world