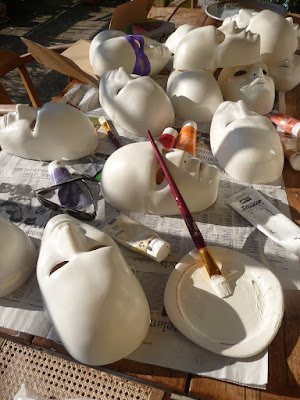 I remember now, sitting in the last carnaval meeting of our group saying 'yes, no problem I'll paint the masks, again'.
When I got everything out to do it, I had a recollection of how long this actually takes. But like giving birth, (well, not THAT bad) one forgets the details; time softens the memory, or maybe I'm just menopausal and can't remember things generally.
Anyway, I've done half of them. I'm taking the sample 'men's one to the meeting on Saturday for it's approval, or not, and then I'll do the whole lot. Do come and see us sporting them on February 11th 5.00p.m in 'La Place de La Republique'.
A day of repetitive tasks generally. I spent about an hour and a half deleting emails that had built up. Mostly crap such as,'rate my photo' from some pillock in Bavaria holding a giant fish, or similar messages. l don't actually know how I got onto some of these World Wide Waste of time communication sites. I must have pressed a yes key when a distant acquaintance had said 'would you like to see a picture of me and my cat', and I was feeling aimless. Mark managed to extract me from one particular site that kept sending me photos of large hairy men from places about as far as it is possible to get from here with messages such as: "Hi, Vladimir is hot to meet you."
Facebook is quite fun, a tad voyeuristic perhaps. I'm not sure if I really need to look at someone's holiday pics when I haven't seen them for twenty five years, but . . .it's good to know one has so many friends. Mmm.
The other twenty thousand messages were from Amazon suggesting I would like to buy one of around sixty types of food blender. Odd as we did actually buy one from them recently. So why would we want to buy another? Plan for the future perhaps? - one can never be too sure about the life span of a blender. Or get one in yellow, in case you wake up one day and find that red makes you feel nauseous.
They also started suggesting I might like to buy other things in similar colours, and things that maybe have a similar function or a vague relation to it. A nice red wood-chipper perhaps; a DVD of the Texas chainsaw massacre? Some Doom Metal music to put through your new Amazon speakers while you're re-creating that scene in Fargo.
So, back to Carnaval. Have just returned from excellent charity shop in Carcassonne: 'terre de Esperance,' armed with old clothes and bits to make into Carnaval outfit for practice run-through tomorrow. Also bought two snuggly wool jumpers for one euro, which would be difficult to purchase from Amazon, but they may be working on it.
Amazon suggests you might like these old tights.
Posted by writing and other stuff at 12:34