We have two dogs. We had two dogs - one died, the small one left on his runty own-ness and so we got the new big dog (see previous posts, if you wish).
The new dog is big enough to require double the food of the old dog and due to certain . . . squishy 'movements' needed a diet of chicken and rice, to calm things down. Things are more 'compact' now, but the question of which food still remains.
For ease, most people reach for a bag of 'crapocrunch' or some similar dry pellets. The new dog, having been given chicken, attempts to wrinkle her nose up in a sneer at the site of the identical round things but as her rib bones are evident (second hand dog) I feel compelled to make sure she eats enough to get her to the right shape. 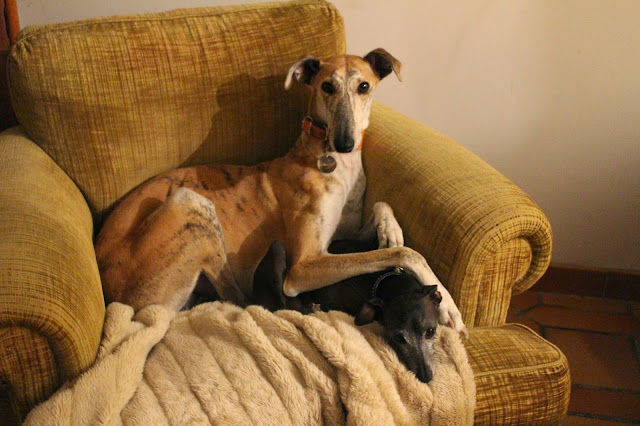 I looked up about the origins of the 'kibble' or dry food. Of course I knew it wasn't going to be happy ruddy-faced farmers rounding up a few choice beasts and telling them their time was up, but just reading about how the sludge that becomes the pellets is produced was enough to forget that avenue.
Canned stuff? The labels show happy bounding dogs, usually glossy red setters or cheeky Jack Russells, happy, healthy, grinning pets. But what is in the tins? Rather a lot of water, and all the same crap that goes into the dry stuff. It's all right for an emergency but then the small dog then suffers from the afore-mentioned squishyness.
So . . . real food. The chicken question.
This shouldn't really be a question. Millions of people are starving, why am I worrying about what my pets should eat? But it is a question.
We eat hardly any meat, Mark being an occasional fish-eater only. Sometimes I will buy a minuscule portion of steak and share it with Ezra, and only if it's proved to have been a happy beast before its demise.
I had been buying the very cheapest form of chicken: very yellow, 'grain fed' fresh. Fresh, what an overused word that is. Fresh. Would you buy a bird that was labeled: a bit past it, not too old, stale? No of course not, but it is way overused, conjouring up images of 'just killed' lovingly prepared, farmer's wife's table etc. I once saw a huge truck on the motorway emblazoned 'beyond fresh', bet the company weren't to happy with the ad agency when they stood back and looked at that one.
Oh yes, the chicken . . . I suddenly realised I couldn't buy any more of the bargain ones after I was trying to get the flesh off from one particularly manky specimen. It looked undeveloped, the ligaments twisted, the leg bones fragile. Of course I had to go and look up factory farming . . . I wish I hadn't. It's all there in our minds of course, hidden away like some hideous corner of the shed that needs clearing out, but three minutes of Youtube info was enough.
No more cheap chicken. So how could I resolve buying more expensive meat for the dogs? I just decided it was buying meat, full stop — for whatever reason, it's the same issue, for us or dogs. We eat very little of it, we don't need to and the dogs do need a certain amount — even though some people would disagree over this subject itself.
So resolved, for now anyway. They get smallish amounts of happier poultry, some minced general meat from the supermarket offcuts section, when it's not too fatty, the odd tin in desperation, loads of rice and scraps. I feel better about it and they seem content.
The whole eating meat issue is one of such enormity and complexity that one could fill several blogs. In France it's especially tricky. People seem entrenched in their need to consume meat; there are public leaflets in doctors surgeries pointing out the dangers for children of vegetarianism.
A French friend of mine, only yesterday said she would like to cook less meat, But my husband, he wants meat at every meal, in fact he needs it. I did point out that Mark (6ft 6 and deemed totally healthy at recent MOT) never eats meat and lives mainly on vegetables, cereals and pulses.
At Ezra's Lycee (high school) every meal has meat: that's just one school in a smallish town in France, times that by every school in every town, not to mention the cities it's a pretty scary view into how much meat (at what dubious quality, and with how much animal suffering) is being produced at breakneck speed to feed this . . . habit really. 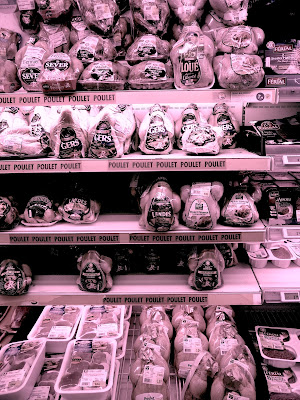 Dog food info: In case anyone wants to try it.

One 'outdoor' chicken, one carrot, one courgette (grated!) two cups of rice, bread and scraps (not onion-dangerous) This seems to last for about two and a half days. About the same as buying five tins of the better quality dog food and crunchy pellets for padding: no squishy stuff, no dog farts (more of there with the dry stuff) and their coats/eyes etc look to be in excellent condition.

Posted by writing and other stuff at 00:31