Isn't the brain an amazing thing? So many hundreds of memories stored in that flabby looking cauliflower in one's skull, along with sounds, smells, tastes, pains and pleasures. Yet, sometimes it doesn't quite operate as you expect - where did I put my passport/socks/bag/keys, et al - and sometimes the more random 'not working' leads to somewhat disastrous consequences such as putting the wrong fuel in the car . . .
I happened to recall the time I did this, just now, as I was planning a trip involving said airport.
Here (and for sake of a wee bit of book promo) is a short extract from the second book in my trilogy 'Staying out of the Midday Sun' based on my wrong fuel plight. Interestingly my mother was treated to a barrage of swear words that even I didn't realise I knew.

"I think we should fill up," said Holly as a service station came into view on the motorway. "It's much cheaper in Spain."
Peter pulled in and Holly filled the tank, revelling in the view of distant mountains while the fuel gauge clicked. She paid and they joined the motorway again.

About three miles down the road the car started making odd hiccuping noises, then juddering violently. Holly had a sudden flashback of the petrol nozzle. It had been green — unleaded petrol. "Jesus fucking H Christ, I just put the wrong fuel in the car!"
"What shall I do?" said Peter, gripping the steering wheel tensely.
". . .I don't know. I never did this before, did you?"
"It would be difficult on a bicycle."
The car kangerooed along; another garage came into sight.
"Pull in!" shouted Holly. Peter swerved in and screeched to a stop, Starsky and Hutch fashion. They went to the shop, tried French and English but blank looks prevailed from the hairy-looking attendant.
Holly frowned at Peter. "Can't you speak any Spanish?"
"Only, dos cervecas por favor."
Holly tried again, speaking in an idiotic slow mixture of language and gesticulations and presenting a sketch of an empty fuel gauge. The man brightened and in turn drew her a picture of a cloud and a wedge of emmental cheese. The shop was suddenly full of a stream of lithe young German men buying lager and porn. Holly's plight was forgotten.
They went to the next door café and tried phoning the insurance's breakdown company. After many attempts Peter reached a real person who insisted on putting him through to an English-speaking advisor.
"Ah, yes, err, I, ow you say, is happen to my muzzer, five ears in ze passing."
"Look, can I be put back to the French advisor I was speaking to?"
"But, I muz elp you, eet iz impo . . ." Then there was silence.
"Shit, the mobile died," gasped Peter. "Now what?"
"Pay phone over there," said Holly. The machine chomped its way through euros while Peter paced as far as the telephone cord would allow.
"Three hours, is that the soonest? okay, merci."
"I thought they would just siphon the fuel out, like they did when I lived in Peckham," said Holly. "Didn't realise they would have to send a tow truck out."
Eventually, the truck arrived. A tanned man dressed in shorts and Johnny Hallyday T-shirt jumped down from the cab and expertly moved the car onto the ramp. They drove back over the border to the nearest French town with a registered garage. The owner came out smiling wryly. He had obviously seen it all many times before.
"Er  . . . ça va coûter combien, environ?" asked Peter, nervously, waiting for the noncommittal shrug.
"Moins de deux cents euros monsieur."
"Less than two hundred," said Holly. "How much less? Three cents, thirty euros?"
"Well, we are rather between a rock and a hard place, aren't we?" smiled Peter. "It can be part of my birthday present . . ."
"I'm sorry. So stupid of me."
"It could have been worse, the other way round . . . diesel into an unleaded can be a write-off apparently."
"I bet this establishment makes its living from twerps getting their car's stomach pumped, being just over the border," observed Holly, a little later, as they sat in the sun outside the café next door. 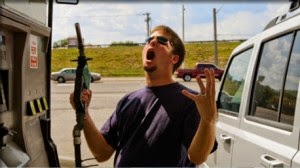 Posted by writing and other stuff at 08:42