Forget the gym - get a rescue greyhound (or two)

Or, in our case, a Galgos (Galgas) the Spanish version - used to run after hares, and abused horribly.
Since we have given a home to 'Bali' my walking pace has increased furiously, and the slightly lazy walks I was doing twice a day have become somewhat more than brisk zooms up hills and round fields. 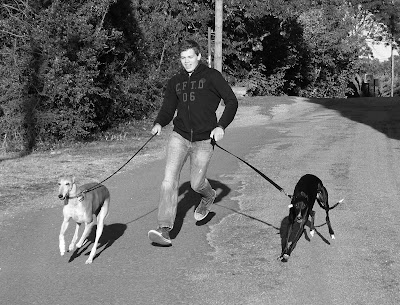 Our original Galgas - Gala, on the left, Bali on the right, son getting exercise in middle

The first few days were actually a serious challenge; walking with two galgos is energising to say the least, but when one of them (Bali) has never been on a lead it's almost impossible. All my joints ached, and a few times I was nearly pulled over slopes and under cars.
In slight desperation I asked Google about how to stop the lead-wrenching, and up popped an ad for 'Canny Collars'.
Being a total ad sceptic, I nearly ignored it but the testimonials were too good, so I ordered one, and a training lead of eight meters (you let them run, with the help of someone, I assume, in order to not let your arm actually leave the rest of you, then call them back with the aid of Frankfurter pieces/cheese/whatever).
The parcel arrived, and obedient person that I am, ignored it for three days thinking it was a birthday present, and opened it on my birthday. It was actually about the best present I could have received.
After attaching it (complicated on first trial) to the dog, we went for a real walk: no tugging, no hauling me into ditches, and walking at my pace - which as before stated, is really not bad now.
I'm still not sure how a simple band crossing the dog's 'nose' - in the Galgos's case - a very long area, works, but it does. 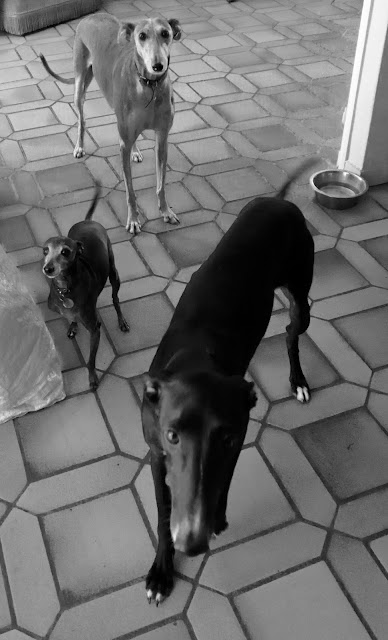 Posted by writing and other stuff at 01:20