Well-used words at car boot sales, no doubt all over the world, for justifying an exorbitant price tag.

In this case at our local 'vide-grenier' - (literally emptying one's attic) where Mark homed in - being a buyer and hoarder of just about any type of musical instrument - on a once-possibly noble Zither.
The guy swaggered nonchalantly over (think you can do this) and proceeded to point out the instrument's qualities.
'It is old'
Yes, it certainly is but not in a good way.
'It is in excellent condition - works perfectly.
No, it doesn't. The strings are untunable and someone appears to have poured a pot of white paint over it, scrubbed ineffectually and then added a rough line of black around the edge to complete its renovation.
Mark and I exchanged glances, trying to guess what the price might be. I suggested it might be worth purchasing it for a more experimental form of jazz - sort of thing where two people and a dog might be the audience. We agreed it would be worth relieving him of the object for about five euros, so he wouldn't have to repack it in the van. No one else within a radius of about a hundred KM would have bought it other than us. That was for sure.
"Vous voulez combien?" asked Mark.
The reply of thirty euros was somewhat surprising. We walked away after employing another useful car boot phrase - 'we'll have a quick look around and come back'.
What one of us should have said was, 'What? thirty euros for that? are you insane? But we are English, somewhat pathetic and perhaps didn't want to spoil his illusion that he did have indeed a very old and unusually-restored item on his stall.
Sadly, it will probably end up at the tip at the end of the Vide Grenier season when it could have featured in some weird and inventive art music piece. 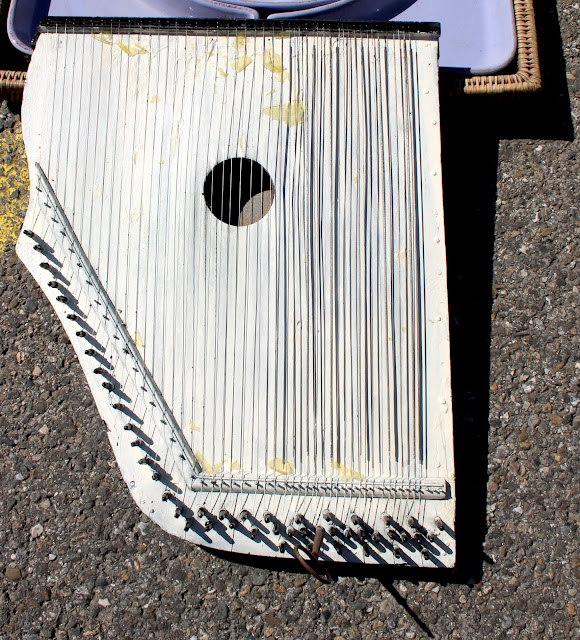 Posted by writing and other stuff at 11:05