Reasons to make a pond

I can think of many, mostly obvious, reasons: providing water for wild animals, birds and insects, creating biodiversity, and just for the pleasure of sitting by water - something we humans, or at least most of us feel naturally drawn to, but of course there are other reasons, just not something I would have imagined. When talking to one of our local veg growers recently I pointed to a mound of earth and a line of young trees at the edge of a nearby field and asked what was going on. He had smiled wryly and said, 'un mare' (a pond); how wonderful, I had said, people finally waking up to encouraging nature being a vital thing. Ah, he had said, that's not exactly why he's doing it. The field owner is a hunter and he's realised that the local small game has virtually disappeared, therefore by making a pond and surrounding hedges he hopes to encourage wildlife back in and then shoot it . . .

Ten minutes into a dog walk this very sunny morning I remembered with a slight wariness that it was a hunting day; dogs would have to stay mostly on the lead and I should have been wearing a gilet jaune or at least a bright scarf or something, not black and grey - too late. We took the road opposite ours, past various stone houses, bored dogs, wandering chickens, and past the sad sheep. I have to turn away at this point in the walk and fight the urge to run over and release the creature from its very short chain and no flock situation. It's an aspect of French rural life I struggle with - a disrespect (not always) for other creatures' feelings. Maybe I'm just a sentimental ex-Londoner but I know that sheep would be happier with others to pass the time nibbling at grass and lying in the shade on a hot day.

I took one of the many cycle tracks that weave through the fields in this region, assuming we wouldn't actually get shot on such a route - there are occasional shooting accidents but usually after lunch and the accompanying large amounts of red wine - this was nine-thirty and although a possible glass of calvados might have been consumed, hopefully people would be fairly alert. 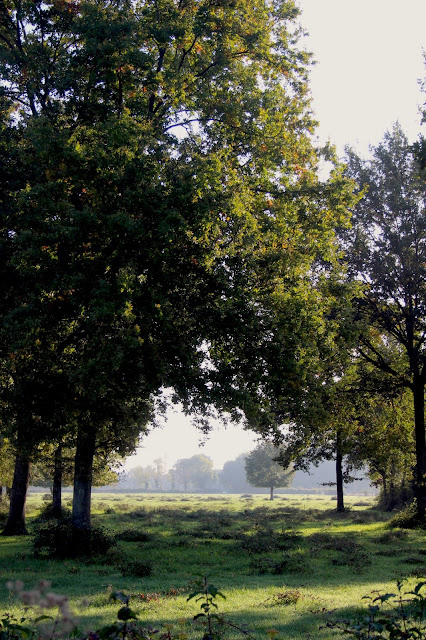 The morning was truly beautiful: the meadows that glass white-green colour of almost a frost but not quite; rising mist spoked by sun rays, slow downward twirling yellow leaves, and, less lovely, camouflage-attired men staked out waiting for whatever gibier (game) is still left in the hedgerows to show itself/themselves. I passed a small group and they were friendly enough, staring at my hounds with their brocade collars as if they knew these were sofa-loving beasts, spoilt and pandered to, unlike the dogs they stalked the fields with. Of course our spoilt hounds were hunt animals in their previous lives and had suffered much before we took them on (Spanish Greyhounds). Hunt hounds here are probably on the whole not treated as badly as the Spanish ones but they do spend weeks and months cooped up in pens presumably dreaming of the rare days they are let out to streak across fields and collect the birds and rabbits shot by their masters. 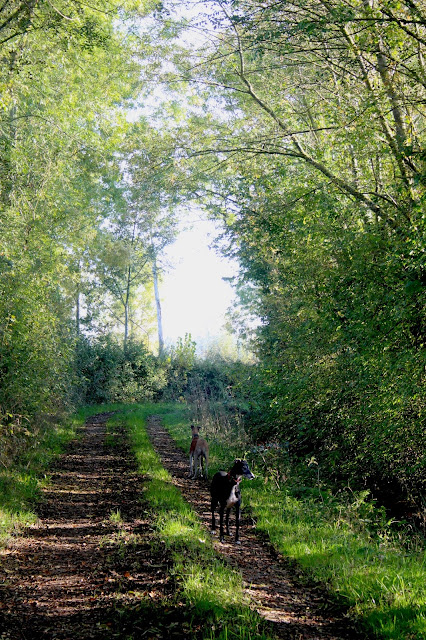 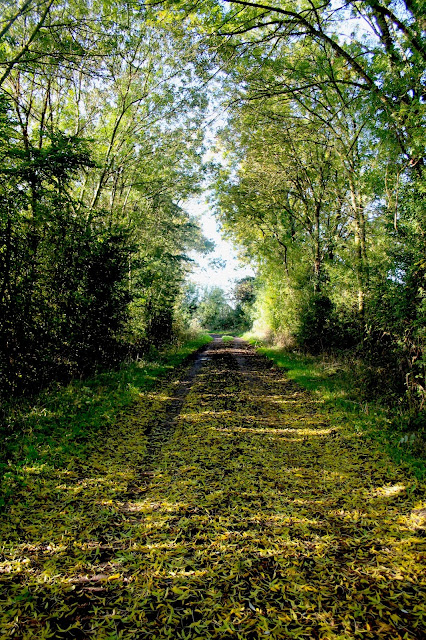 I'm not completely against hunting; I'm sure I'd be the first clamouring for a spare gun if/when the supermarket aisles are laid bare and finding food became/becomes a little more complicated than nipping to the market or calling into Super U on the way back from somewhere in the car. I don't have a problem with someone fishing or shooting something for the pot per se - it's something that happens very regularly in my novels - but its the getting together to track down small beasts (and larger ones where we lived before) the sport element, the joint celebration of further nature devastation I find less understandable.

Anyway, none of us got shot, even the dogs who took advantage of a few minutes non-lead liberty to streak across a distant field behind three young deer - an image I won't forget: the deer bouncing gracefully against a line of yellowing poplars, our dogs in manic pursuit but unable to gauge the terrain familiar to their potential (unlikely!) prey. We walked back, the older dog's back limbs quaking after such a chase and they collapsed gratefully to their respective sofas while I prepared their lunch and thought about constructing a pond.

Posted by writing and other stuff at 07:22