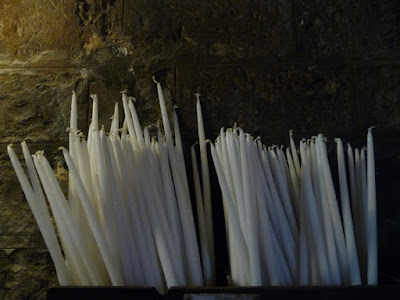 I went to a French Funeral this morning.
It was interesting to note the differences. Several U.K ones I can remember seemed to be rather 'in and out' - bit like life really, on a certain scale. This was elegant, touching, lengthy and freezing.
The priest was majestic in his Polar-white robes, his gentle voice echoing around the ancient stones. Unlike me, dressed in black, complete with VAT inspector leather coat, most folks were dressed casually, no weeping weeds, veils, or crisp once a year-used suits. The coffin was placed in the entrance of the church at the beginning while the priest began the service; we all gathered around and thought about the body inside, the workmanship of the coffin, etc.
This is the bit, where I usually start sobbing. The finality of the human frame incased in wood . . . then to be immersed by flame or soil, but as I had never actually met him, and was there to support his wife, it didn't really seem appropriate.
So the service came to its end; incense was waved, psalms sung and many prayers said.
The moment which will become one of those imbedded memories was when the disc of bread was broken in the total stillness.
A tiny resonant 'criiickkk'
Posted by writing and other stuff at 06:44