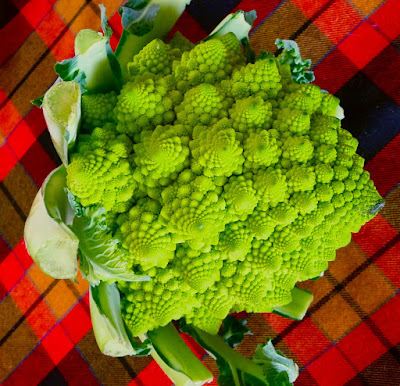 Just in case we forget how amazing nature is.
Makes me feel somehow hopeful, despite us unloading toxins into the air/soil/sea, that the natural world will prevail. Talking of dumping stuff in the sea, I read with amazement that the hole in the crippled Japanese nuclear power station has been blocked with a mixture of . . . sawdust, newspaper and a form of liquid glass. I remember doing exactly that to my cousin's red Spitfire in about 1976, surely things must have have moved on a bit?
Anyway back to the vegetable featured above.
Err, not much really, except that when I see these bright green kings of the legume world I always have to take a few minutes of silent contemplation over their sheer magnificence. Ezra says he saw an 'expose' about them in the Paris science museum. Apparently, even under super-magnification, the spirals keep on spiralling, seemingly into infinity. Well, it makes a change from thinking what is outside our universe, where does it end? etc . . . but similarly brain-taxing on a slightly different scale.
Enough. Back to the washing up, invoicing and cat hair removal. Safe, small activities of no wonder.
Posted by writing and other stuff at 07:46