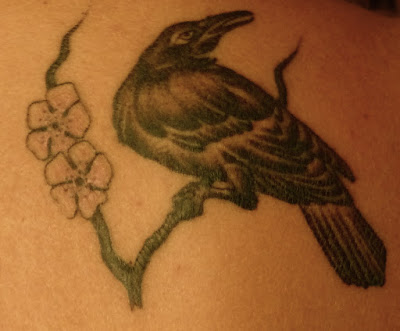 Back after very odd two weeks in UK. Basically clearing out Mum's house, taking as much stuff as is allowed into the home and the rest to friends, Oxfam and the dump. Dreadful.
Good highlights though, seeing friends and family, swimming once in the sea and seeing films in large building called a cinema - must remember to do this from time to time.
Actually, one film I saw was so boring I'm not sure if I just fell asleep and imagined I had been in afore-mentioned edifice. It was called 'I don't know how she does it' hopefully to be renamed, I don't know how the script writer got away with it'. Had good actors in it too, like the father in Little Miss Sunshine, whoever he is. Must have been desperate for money?
I asked a couple after the film what they had thought. They said: "Err, nothing happened" Good comment; spot on, I thought.
I also got a tattoo! It's been a bit of a year for me, and I wanted to finish the last day of it with something a bit unusual . . .
On the last day I cleaned up the house, went to see Mum and set off back to base. Seven hour coach journey follwed by sleep in Stansted airport overnight. Awful. Had just got to sleep, then at 3.00 am the staff came and moved everyone through departures as we were rather cluttering up their nice shiny hall.
Had breakfast at 5.00 am and watched people queuing to buy duty-free perfume as soon as shops had opened their doors. What recession . . .
Then sat for another five hours, but did get a lot of writing done.
Back home. Wonderful, despite mess from the two men folk on their own for two weeks. Love them.
Posted by writing and other stuff at 00:48