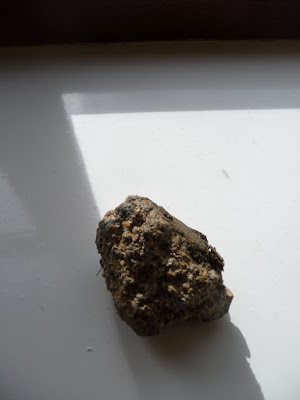 More like crushed and removed.
On my trip back to the mother rock I went up to my old school to swim in the gym's pool. I was grieved indeed to see my beloved lieu of learning as various, size-assorted piles of rubble.
Actually, I wasn't. The clutch of buildings had represented a fairly desperate example of early 1970's architecture.  I do have a few fond memories of my time there, such as gazing at Mr Bewley's handsome features in A level geography, hence my grade F.
It was also quite good fun roaring across the playground on my Puch grand prix moped - when it would start. And, Mr Hough, the art teacher was an inspiration, 'Crud' the headmaster - not.
I'd been glad when it was time to move on.
On the way back from the pool, (still operational) I took this small chunk of concrete from the site as a memento of those long-gone days.
A man wearing a plastic yellow hat came over and asked me what I was doing. I, in return asked him what he was doing and was going to happen to all the rubble that was passing through a most impressive crushing machine. He said it was going to be the base of the car park for the super new building. We stared at the craggy lump in my hand for a bit.
"I bet you can't identify which classroom it came from,"he said.
"Geography" I replied, and headed back to the car in the pissing rain.
Posted by writing and other stuff at 12:32