Phew, was just on the verge of becoming a species of moss. July was more October in the UK. The shelves of charcoal and jokey BBQ aprons were not selling too well and I noticed how quickly an assistant in Beales was able to lay her hands on a collection of thermal vests for my mother. The garden party at mother's nursing home will have to be indoors, and wimbledon must by now be a peat bog. 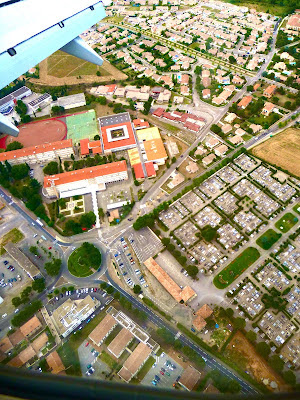 This is a picture of the plane's wing as we turned to make the descent to the runway at Carcassonne . . .for the third time. There is a point on every flight where people put down their inflight magazines and look slightly perplexed. Calmly so, a few seconds later a plaintive bleating might start . . .what is going on exactly? The captain stepped in with, "nothing to worry about folks, just ]=-6;d\t-=]\\z0g on the runway." "What did he say," said my fellow passenger, suddenly friendly as perhaps we were going to be facing near death or death together. The plane turned sharply, the engines roared and it set off towards Toulouse again. I muttered something about the wind direction and went back to looking at the same farm buildings we had passed three times. A small boy two rows behind asked his mother why was the wing wobbling about. Why indeed? What sort of glue does Ryanair use anyway? we should have all paid the extra safe wing price, added bolts five euros extra. Actually I knew what the problem was The pilot,who was probably fifteen, had suddenly had a revelation that the airstrip was in fact far too small. It does look short when viewed from 40,000 feet or whatever. he was going to keep flying until he had another idea, or perhaps feign death leaving one of the powdered hostess women to take control. Either way this could be it, and the only thing left would be my camera revealing a photo of my mothers collection of new thermal vests which I took as proof so they wouldn't get lost in the homes washing system. The moment passed and the plane landed to a few weedy handclaps and NO fanfare as the plane was late by then. Ha!
Posted by writing and other stuff at 02:59