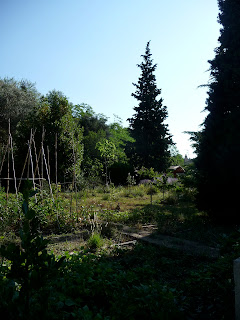 I forget how many other little worlds are in the garden. I was running about this morning trying to keep up with watering a few desperate things and feeling slightly panicked.
Vivaldi hated the summer, apparently: to him it was a time of asthma attacks, raging uncontrollable heat, and a constant whirring of insects. I love summer, but sometimes it does make me feel slightly on the edge - waking to an already hot day and noticing how many plants are wilting.
Anyway . . . I digress.
I was walking back to turn off the pump and noticed a largish snake oddly motionless, but alive. It started to writhe slowly, then I noticed with horror that it had a gaping wound about a third way down it's body. I stood transfixed, thinking about quick ways to finish it off, but not moving as the thought of that is, as to most of us woolly live and let live types, not easy. Mark was out, and anyway he is weedier than me and Ezra had retreated to the safety of the house.
It proceeded to then slowly regurgitate, (sorry if you are planning lunch or anything) a whole tiny baby rabbit, which presumably caused the wound by trying to escape. The snake lay exhausted. I went to get an axe; on my return it reared up and looked suddenly very alive.
Could the wound mend? I opted for a shovel instead and scooped it behind a bush. Out of sight, out of mind . . . Not. I think the image of the scene will haunt me for a while to come.
Posted by writing and other stuff at 00:24