I was just standing outside a shop in Limoux this morning, trying to remember what else I was supposed to be doing as I had forgotten my list when I heard loud English voices.
A wobbling woman approached dressed in pastel shades with a bad perm. Her husband was red-faced and silent, probably having long ago built up ear defences to her continual verbal onslaught; he was obviously also planning his next glass of wine.
The English abroad (of a certain age): generally, we are easy to spot, (me, less these days as I dress mainly in French charity shop stuff) flowery skirts, sweatshirts, pastel T-shirts, 'slacks', flat sandals, sometimes with socks, beige baggy shorts, pale yellow or pink jumpers . . . and so on. Anyway, he was attired in a blue small check, very ironed shirt, beige slacks and sandals: hair, white and combed to the side, a copy of the Daily Mail tucked under his arm along with a beige raincoat - just in case.
Why I am being so disparaging? Because of what she said.
'Well, it's like I said . . . of course you can't be too careful in places like this - their refrigeration is probably not up to the sort of standard we are used to'.
WHAT?
Where the  * * * * did she think she was? Borneo, or some lost village in Brazil where they may not been blessed with electricity? We have fridges here; ours is quite a nice one and I'm sure the amount of terrifying French health inspections would mean that any cafe or restaurant in Limoux would own one disinfected beyond something in a space station. I mean, really!
Here is a wonderful picture by Carl Spitzweg called, English tourists. (Hope you don't mind, whoever owns it) I wonder what they were being shown? An early refrigeration unit just out of the picture? 'The manual says you can stock seventy-five bottles of Chardonnay in it. I'm not sure Clarice - what do you think'?
'Well, it's like I said . . of course, you can't be too careful . . . ' 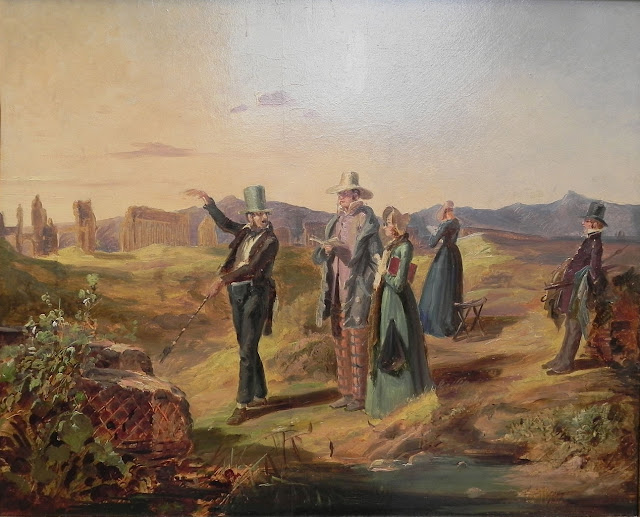 Posted by writing and other stuff at 09:55