As I look outside on this drizzly April day; oh hang on, it's June - nearly July: not possible, the longest day came and went . . .where? Anyway. As I look outside etc . . . the most apparent thing is the song of the Donkey bird. Yes, a bird that sounds like a donkey, or sometimes a squeaky gate. I don't mind the AARRHHHH part of the song it's the EEE bit that's getting to us.
No one else in this road seems to have them. We've obviously attracted a commune; perhaps they like free jazz, or the abundant weed/insect supply? I can't find one to interrogate as they are almost impossible to see. 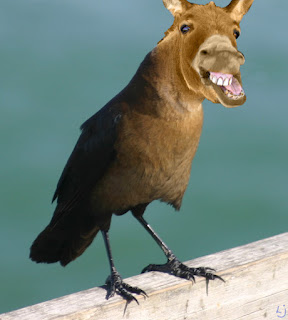 I did catch a glimpse yesterday - sort of small, and burnt biscuit in colour. Armed with this useful visual info I looked on THE NET: nothing. All birds that looked vaguely like it had pretty warbling songs, not repetitive anxious squeakings.
All other bird song seems to have stopped, even the nightingales. It's as if they are all peering at the 'meteo' too, wondering whether the nest will withstand the next heavy downpour. Sadly, there are a lot of swift and swallow deaths this year due to the lack of insects riding the usually hot air; I've found several little black corpses in the undergrowth.
So . . . at the present time we have the Donkey Birds shouting at each other from one end of the garden to the other, presumably from their waterproof habitations. The sun is supposed to be in the right place from about Tuesday onwards, perhaps the other birds will come back.

Picture borrowed from an excellent blogsite —'Are we Lumberjacks?' Hope you don't mind.
Posted by writing and other stuff at 02:46

Email ThisBlogThis!Share to TwitterShare to FacebookShare to Pinterest
Labels: Donkey-birds, free jazz, where is summer