Life is not always the above saying. Yesterday was rather more bucket of wilting ragwort.
Actually, it wasn't all bad at all, I just had a headache and the boy was vacillating between vile crossness and manic stupidity. He was tired and hot and headachy too - ultra high pressure it was, with vast cauliflower clouds as he put it - poetic.
Today, same weather, same mother and boy, but roses . . . perhaps not a bed of, but certainly a good vase full. We talked a lot, went for a walk in a village, previously unexplored (by us), went to Carcassonne to get his phone fixed by the miserable bastards in Boeig? Beoig? Boueyg, (however you spell it) telecom; forgot the phone, much to the only-just-hidden pleasure of the sulky 'jeune', and  adjourned to the square to drink foot-high fruit cocktails.
Found the boy a pair of shoes he liked (almost impossible) and two t-shirts that weren't black, and a daft t-shirt with bluebirds on it for Mark. On our return home, the dog hadn't peed on the sofa, and the donkey-birds (see several posts back) in the garden had been replaced by two pairs of musical songsters, twittering happily in the early afternoon sunshine. 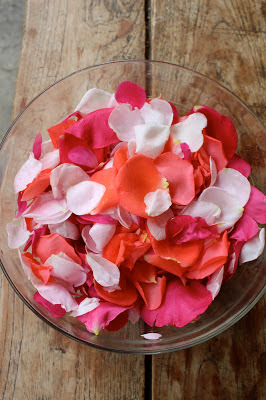 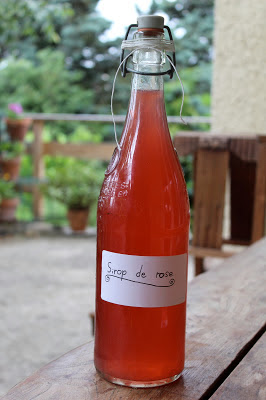 As a celebration of the rosier days: petals collected by the boy, and syrup he made subsequently after an afternoon of 'airsoft' gun practise . . .

Posted by writing and other stuff at 13:51