Is it only me that gets terribly sentimental about so called 'inanimate' objects?

We have had this car for eleven years; it's been on a million trips to the dump, Carcassonne to buy tropical fish for Ezra's Christmas present, been puked in by the runty dog, driven to the UK and back, trod many a time the route to the coast; been filled with instruments, cleaned twice, been beaten on all sides including the roof! cried in, laughed in, sung in, and sworn in, and it only broke down once or twice and that was due to a faulty key fob. 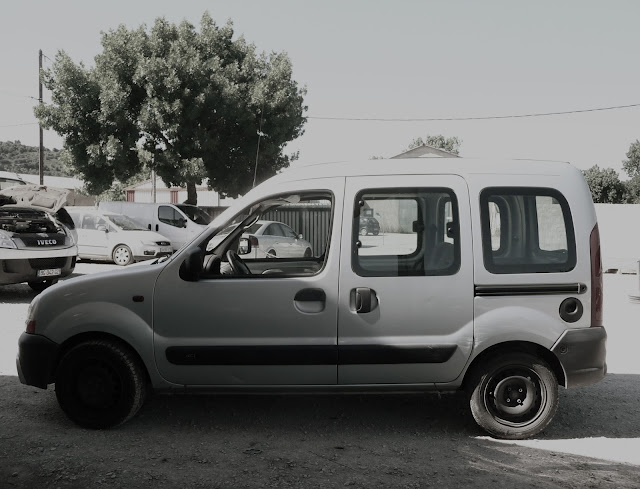 SO . . . I was sad to see it go, but the time had come. The dreaded 'Cam belt or 'something de distribution' in French needed doing, (big outlay) it had failed the 'control technique' (mildly, it must be said) and the clock was reading 300,000 KM.
A man in the local garage took it on for a fair price, and we have replaced it with the same thing but a bit younger.
Mark didn't hover closely to the car and whisper thank you, or any other twaddle, and the boy barely noticed that the car has suddenly become black instead. But I did talk to it, waved goodbye and took this photo . . .
It was far worse when I had to take my beloved Morris Traveller to a specialist garage in Oxford to sell it.
The car only liked London; as soon as I moved to Nottingham it refused to start most of the time and I was forced to consider a reliable Volvo thing. That goodbye was tragic – mostly for the poor guy who had to take me to the station (train, not police) sobbing in his car. Pathetic.
Posted by writing and other stuff at 02:25