Christmas . . . unless someone discovers very quickly that Jesus was in fact born in Woverhampton on the seventh of July.
Yes, we are shuddering inexorably towards that crucial date for which a hanger's worth of festive twaddle must be bought, obscene amounts of food stocked and permanent smiles fixed as much-loved relatives such as warty and irritable Aunty Joan are welcomed to the hearth and table.
Each year my keening for a lonely beach and a small fuggy café where we can sit eating egg on toast quietly reflecting on the year, increases. But fun must be had, Mary Poppins watched, paper hats worn and terrible cracker jokes read.
I love it really.
No, I do, it's just all the overfed lead up to it - like some glittery nightmare turkey increasing in size each day, stuffed with internet purchases and credit card limits. What is it all really about?
Jesus. A baby who was presented with three gifts: an iphone, a play station and Grand Theft Auto.
I think we have lost the plot, or it was lost for us by desperate manufacturers.
Anyway. This post was meant to be about the yearly visit of the postmen, bin men and firemen and the delight of receiving their calendar for the coming year. Not. 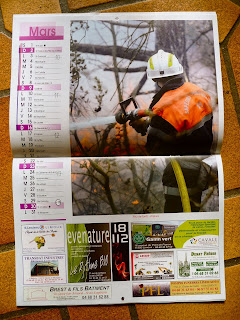 Why don't they make something different? I don't want three dreadful calendars that are so covered with ads that you can't write take dog to vet on them. Or at least it could be a cheeky one with firemen sliding down greasy poles wi nowt on . . . but then thinking about some of our local firefighters . . . maybe not. Just a promise to turn up if one's house catches fire would be fine. I'm happy to donate, but we don't need a calendar - thanks.
The firemen calendar is informative on the whole: pictures of people dressed in dark clothing directing water onto flames and the like. The postmen and bin men ones are usually a selection of choc box images: flowers, kittens, palm trees on white beaches, simpering kids; well I suppose a snap of a couple of overflowing bins or the local tip might not be considered . . . nice.
One of my favourite images in our 1970's photo-plastered loo is a 1974 calendar pic of three bin men in Collioure (highly picturesque seaside town) The choc box idea went a little askew that year . . . 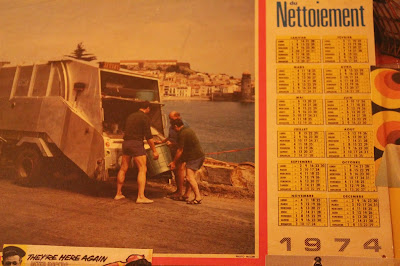 Posted by writing and other stuff at 12:22