What is the point of trying to create art I thought to myself as I stepped back from this wonderment, backlit by the morning sunshine. It's all around us; created by us, knowingly or otherwise.
The person who concocted this gate did so out of necessity: keeping dogs in or out, people in or out, whatever, but they made it from what was available; probably from that fly tipping site I noticed just down the road.
If I passed this in the Tate, hung in the main gallery, or in a dare ye to enter gallery near Bond street, I would have admired it as I did this morning, for its colours, its random construction and sheer boldness. Whether it had a price tag of seventy thousand pounds or it was about to be loaded into a skip, it was art either way, to my mind. 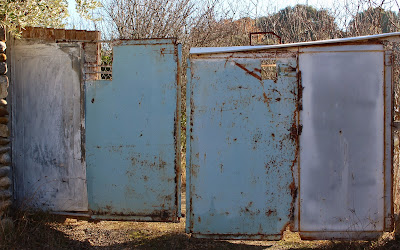 I'm writing a book at the moment set in 2090.
Here's an extract set in a shouting-house (auction rooms) after the early 21st century furniture lots have been sold.


I stand for a moment listening to the shouter announcing the next lots.
"Art."
There's a collective shrug in the room and people start leaving, the tradeable stuff gone. "D'ac," he continues, "let's run through this quickly. From the 2000s, Damian Hurst: two circular paintings - dealing ten bottles good quality red wine."
Silence.
"Eight, seven?" More people are leaving. "Six, five? Sam, put these back into the Frydy flea sale. Right. next up, Tracy Emin's bed - piece from 1995. Seeking, six bags flour. Anyone, not a bad mattress . . .  ?"
"Disgusting ol ting!" Scowls a wrinkly Jamaican woman standing next to me. "Could sell mine. Looks no different."