As mentioned in last post. A small extract of Chapter 8 from my book 'Going out in the Midday Sun' featuring Jasper in his 'new' flat - where I lived in the mid 80's for a couple of years. 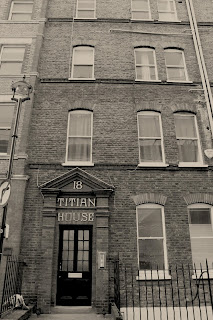 Jasper climbed the last flight of stairs in Titian House. It was so dark he had to fumble for the keyhole in the door of flat Number Ten.
His flat in Archway had sold very quickly to the first viewer, as Sandra the estate agent had predicted. Holly had fallen for the flat totally and was keen to move in as quickly as possible.
It had been the catalyst he needed. He plunged himself into sorting stuff and purging unwanted belongings.
The sale took quite a few months to complete, during which time Jasper visited lots of flats: cramped, depressing places. He quickly realised that moving further in to the centre of town was going to mean something awful, if he was going to stick to his budget.
Just as he was about to regret the sale, Jasper found the office of Imperial Properties Ltd - a dingy dive in Wells Street with dark brown walls, faded stacks of papers and teetering filing cabinets. Almost everything on Mr Cohen's books was above Jasper's means, except a studio flat in Nassau St: a top floor garret with views above a pub roof and pigeon nests. But it had a bit of character and was at least light.
Jasper paid the deposit and spent a day cleaning what appeared to be egg off the walls. He painted it all off-white, moved his newly-depleted belongings and settled in.
The kitchen, no more than a cooker, fridge and worktop, was in the lounge, which was the size of a kitchen. The loo was a tiny box and the shower, a mysterious dribbly affair encased in brown plastic, sat in the bedroom next to a rickety 1950s wardrobe. He was a free bird in its eyrie, ready to fly: no complications.


Jasper sat down by the window and looked out over the rooftops; it was so quiet, almost impossible to imagine the traffic coursing up Tottenham Court Road a couple of streets away. His thoughts were interrupted by a knock at the door. Jasper went to open it and was surprised to find a young man wearing a threadbare dressing gown, standing in the corridor, holding a bottle of tequila.


"Hi, I'm John. Just thought I'd greet the new neighbour. We're having a party, d'you want to come over?" Jasper glanced down the corridor. He could see jiggling bodies and a lot of bottles through an open door. "Students," explained John, "medical students."
"Err, okay," said Jasper. He had been hoping to do some reading and plan his day off tomorrow but it seemed churlish to refuse a friendly offer of welcome.
"I haven't got anything to bring," he said, doubtfully.
John looked him up and down. "Oh, just yourself will do nicely."
Jasper watched his rather attractive figure swaying down the corridor and drew in his breath: Uh, oh, complications.
He tried the shower: odd, but wet at least, then slipped into something casual but not quite a dressing gown. As he had nothing else, he took a tin of peaches he had found in the cupboard. The door was opened by a girl in a surgeon's green top and yellow high heels; her face flushed, mascara smudged.
"Come in, stranger."
Jasper did so and handed her the peaches. "Suze, put these in the punch!" she yelled, ushering him in to the throng.


"This is Jasper - new neighbour," announced John. There followed a chorus of, "Aw, poor him!" and someone staggered over proffering a glass containing a very generous measure of something.
"Tequila slammers," grinned John. "Here we go, 1...2...3!" Everybody thumped their glasses and drank. Jasper swallowed the fizzing liquid. Three more and he was up and dancing to The Cure, his shirt off and John's hands caressing his bare torso.

Jasper slowly opened an eye; something stabbed him in the pupil: Light. He moved his head and discovered his brain had been replaced with a ball of molten lead. He was lying in something smooth and cold, a coffin? A bath - luckily not full of water. He had his boxer shorts on and a blond wig in one hand. Moving hurt a lot so he lay there for a long time, squinting at the marble tiles. They all had scary faces. Screaming cats, phantoms, Pascal the chef: Putain . . . wat 'appened to you, hein?  He groaned. This was his day off, his planning time, and he'd be unable to walk, let alone sort his flat out.
Jasper stood unsteadily and managed to place a foot on the floor, which heaved to the right; nausea rushed over him and he was violently sick in the sink. The room was a rollercoaster. He lurched to the door, wiping his mouth on a sock, stepped over bodies and retrieved his trousers. Back in his flat he crumpled onto his bed and stayed immobile for a long time.
With small movements, he managed to turn on the TV at the end of the bed. The remote buttons were stuck. The only programme was 'The Waltons'. He lay very still, watching cheery folks as the room spun gently. The pigeons cooed and strutted outside, the sun passed over and round and by five o'clock Jasper was just about able to get up.
A whole day wasted. He tried the shower again, dressed gingerly and left the flat taking the stairs slowly. He walked into Goodge Street and explored his new neighbourhood, pausing outside an interesting pub but the waft of beer fumes was too much. He opted for a comforting bowl of plain pasta in an Italian restaurant, then continued wandering, returning when it was dusk.
Titian House was in darkness, the musty smell of old carpet and long ago-varnished wood already familiar. He climbed the three flights of stairs, realising that the climb was going to be a good daily workout in itself.

Posted by writing and other stuff at 06:33

Email ThisBlogThis!Share to TwitterShare to FacebookShare to Pinterest
Labels: Going out in the midday sun, Nassau St, Titian house